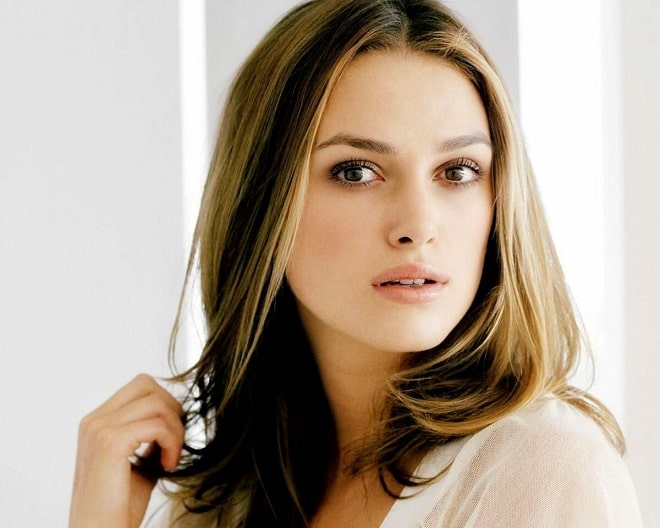 Keira Knightley is a famous British actress, winner of two Oscar nominations. She became widely known for her participation in the films “Pirates of the Caribbean”, “Pride and Prejudice” and other famous films.

Keira Knightley in her youth

Keira was born in March 1985 in a London suburb called Teddington in a creative family. Her mother, Sherman MacDonald— is a famous Scottish screenwriter and playwright. Father – Will Knightley is a theater and television actor. 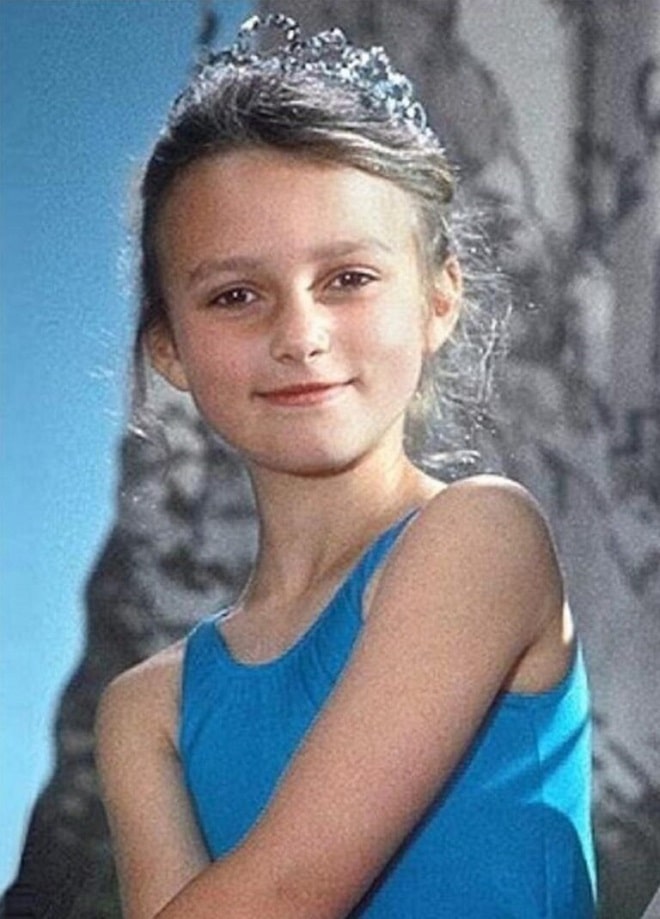 The cinematic biography of the young actress began in early childhood. 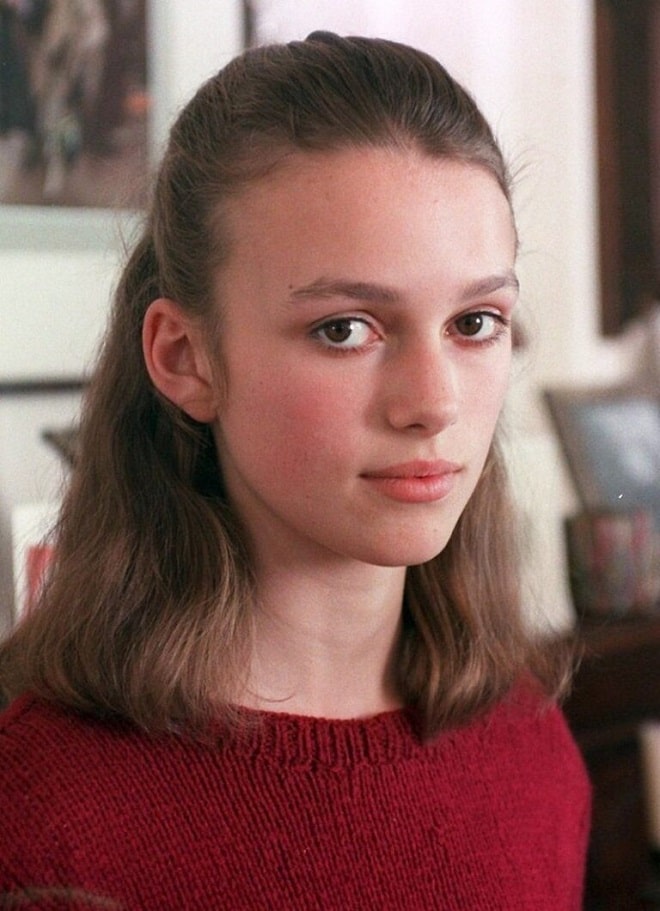 At the age of 14, Keira Knightley received an invitation to work in a Hollywood big-budget movie. She played the role of a maid named Sabe in the movie “Star Wars: Episode I — The Phantom Menace” (1999).

In 2002, the young actress became known to the world audience. Fame was brought to her by a film called “Bend It Like Beckham”. The personal success of the young actress was complemented by the film’s nominations for prestigious world film awards, the American Golden Globe, and the British BAFTA Award.

Then “Pirates of the Caribbean: The Curse of the Black Pearl” (2003) appeared at the box office. In this film, the actress played one of the most famous roles in her career. The film claimed the Academy Award in five and the Golden Globe Award in six nominations. It was the beginning of a franchise, which by 2020 has five films.

Keira Knightley has become a global star. According to the actress, after the release of the film, she learned for the first time what it means to be the object of a constant paparazzi hunt.

The film “Love Actually” added popularity to the actress. The film won 10 prizes, including a BAFTA, and claimed the Golden Globe.

In 2004, the blockbuster “King Arthur” was released. In it, Keira embodied on the screen the image of Guinevere, the wife of the legendary ruler. The film showed modest results at the box office. Critics wrote devastating reviews of the film. But this did not affect the reputation of the actress. 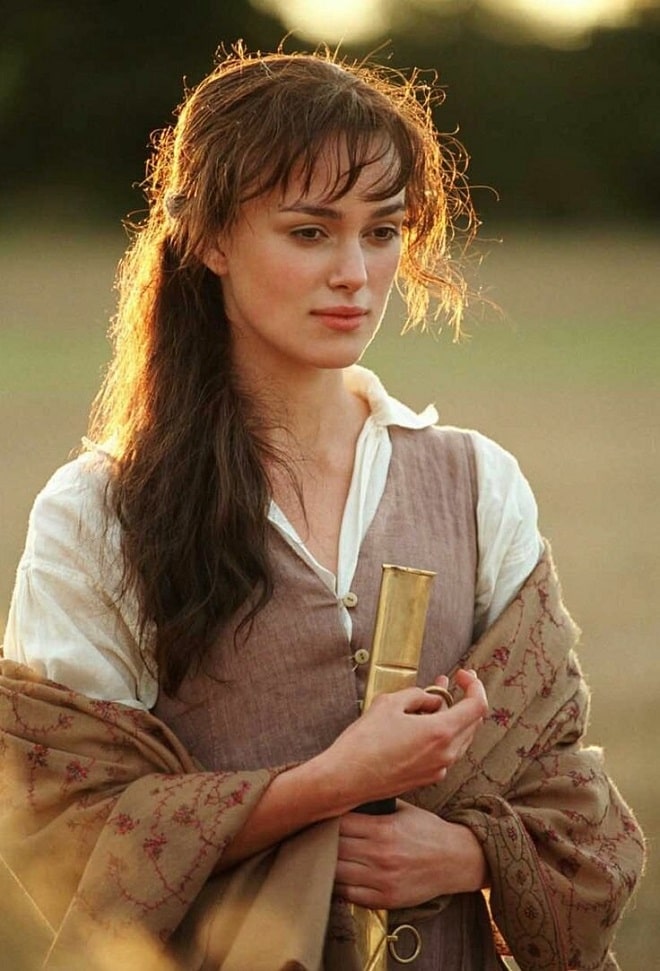 Keira Knightley in 2005 played one of the most important roles in her acting career. The film “Pride & Prejudice” brought her the first nomination for the Oscar film Award. Critics enthusiastically commented on Keira’s work, compared her to Audrey Hepburn.

A year later, the performer worked in the movie “Pirates of the Caribbean: Dead Man’s Chest”. The film not only received a BAFTA, an Oscar, and 42 other prestigious film awards but also earned a record $1 billion. all over the world.

In 2008, Keira turned out to be one of the highest-paid actresses in Hollywood. She played the main role in the film “The Duchess”, which was awarded the British BAFTA Award and the American Oscar. 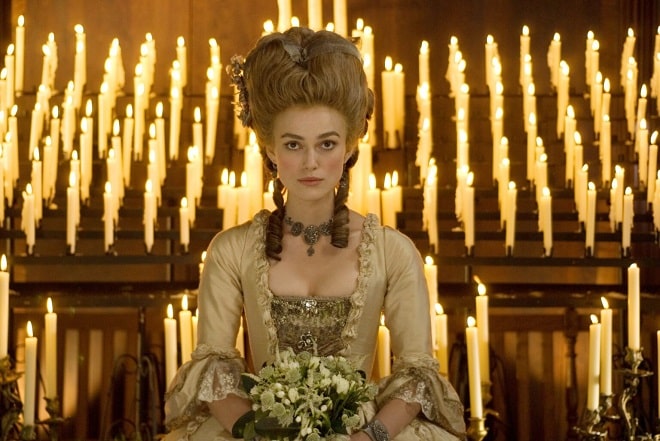 Keira Knightley in the movie “The Duchess”

The film “Atonement”, in which James McAvoy starred in addition to Knightley, was recognized as one of the best in the careers of both actors. For this role, Knightley was even nominated as best Dramatic actress.

In 2012, the entire world cinema community started talking about the brilliant premiere of the next film adaptation of “Anna Karenina”. Keira also got the main role this time, and Jude Law himself acted as her on-screen partner.

Keira Knightley, whose date of birth is 1985, has already become a nominee for the Oscar film Award for the second time and the Golden Globe for the third time by the age of 30. Her success was brought by the popular picture “The Imitation Game”, which was released in 2014. Some critics took the nomination of the actress for the prestigious film award as a sign that Keira has returned to work in blockbusters.

From 2015 to 2020, in the career of the actress, there were both films that received negative reviews from critics like “Collateral Beauty” (2016) or “The Aftermath” (2019), as well as the successful continuation of the “Pirates of the Caribbean: Dead Men Tell No Tales” (2017), and the film “Colette” (2018) and a number of other projects positively evaluated by critics and viewers. 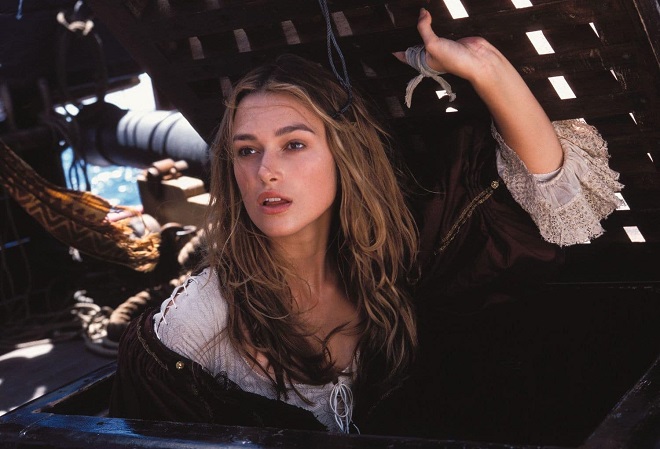 Keira Knightley in the movie “Pirates of the Caribbean”

In early 2011, Keira met musician James Righton. In an interview, the actress said that they were introduced by a mutual friend at a dinner party.

In the spring of 2013, the couple got married in France. Two years later, the couple had a daughter, Edie, and in 2019, Keira gave birth to her second child, daughter Delilah.

Did Keira Knightley have plastic surgery?

Keira has a charming appearance and a slender figure. In an interview, she admitted that her body has changed a lot after the birth of children. She said that she planned to return to her previous form as soon as possible. However, after giving birth, she did not want to become a victim of criticism and stopped putting appearance first.

The world community does not stop discussing Knightley’s appearance. After giving birth, the model parameters of the actress’s figure changed only slightly – this can be judged by the pictures of Keira in a swimsuit.

The actress is completely calm about the lack of large breasts. Keira Knightley has been fighting with retouchers of glossy magazines for many years. They add non-existent volumes to Kira and finish drawing her breasts a couple of sizes. 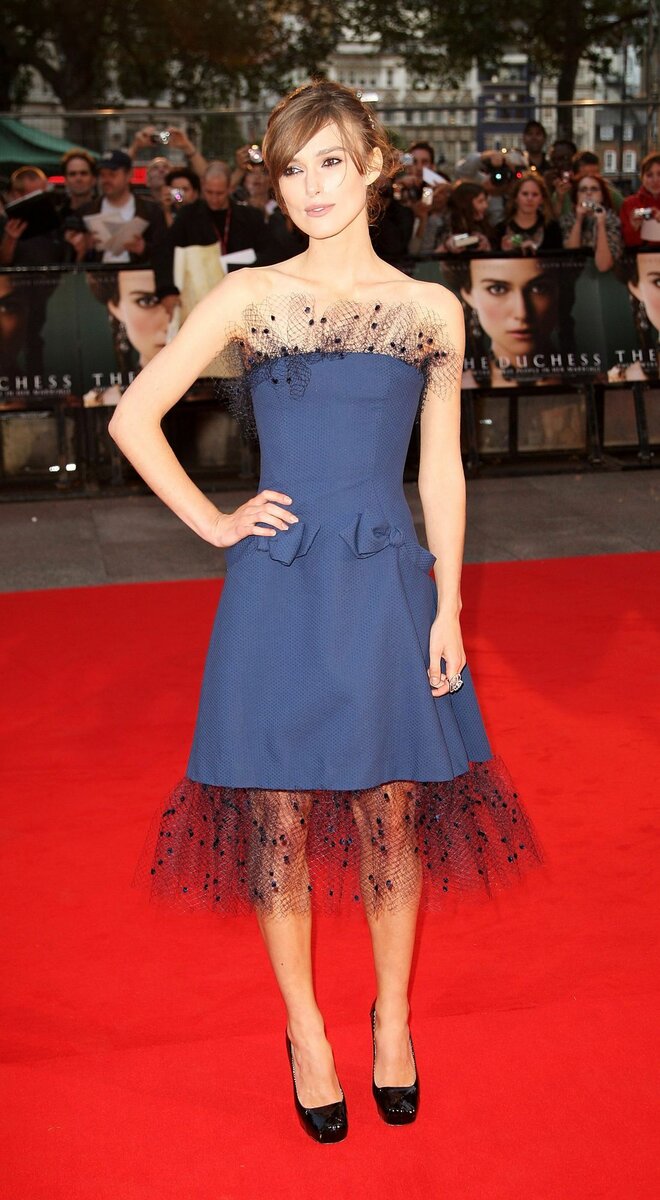 The protest of the actress escalated after the release of the poster of the film “King Arthur”, where her breasts were noticeably enlarged. At a photo shoot for Interview magazine, Knightley forbade editing a boob on the photo but agreed to makeup with a “breast enlargement effect” when filming Pirates of the Caribbean.

Before the start of filming in “The Duchess”, the director persistently recommended the actress to do augmentation breasts. But Keira didn’t agree to the boob job. During the filming, Knightley wore a push-up bra.

Keira says that she is not going to radically change her natural appearance. The British actress condemns the stars who abuse the services of plastic surgeons. Keira Knightley says she has never had plastic surgery. But, like many other celebrities, the girl is lying. 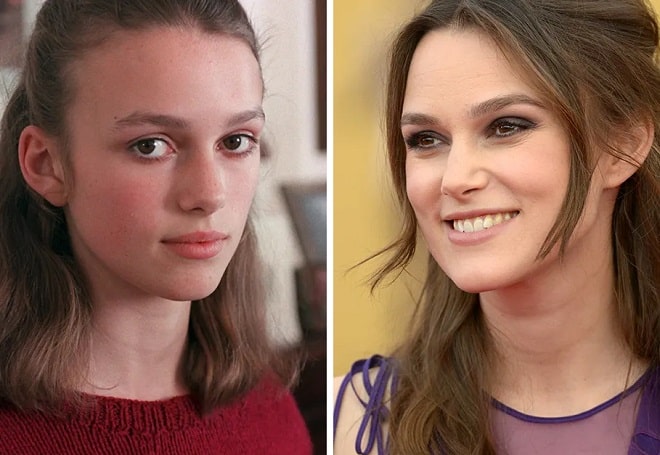 In her youth, Keira Knightley did a nose job. After rhinoplasty, the shape of the nose changed, Keira got rid of the bridge of the nose that was too wide. 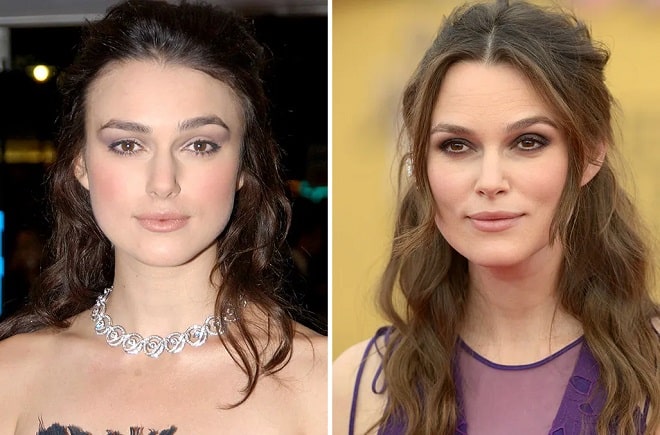 Some suspect the star of lip augmentation. But if you compare the photos in her youth and now, you can see that her lips have not changed. Although when she smiles, the difference in the volume of her lips is clearly visible. 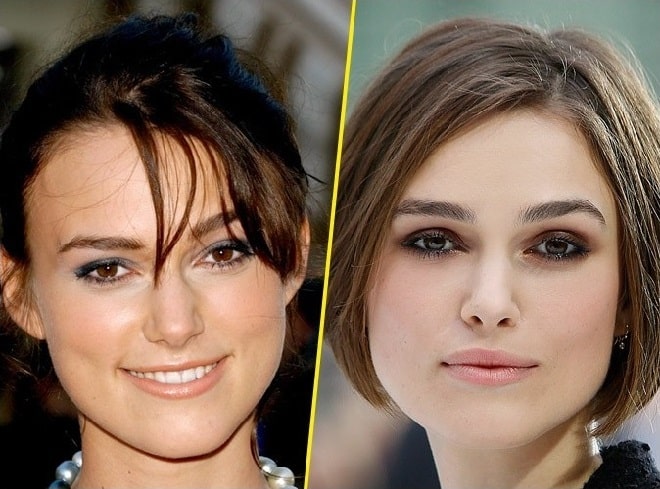 The star is absolutely not afraid to change her image – throughout her long career, she often changed hairstyles and images. For example, in the 2000s, the actress wore short haircuts that made her look like a boy.

Then Keira grew her hair long. She curled and straightened her hair, experimented with color and styling. At public events, she rarely appeared in the same image.

But even the most insignificant flaw on the face of a celebrity does not go unnoticed by viewers and fans. 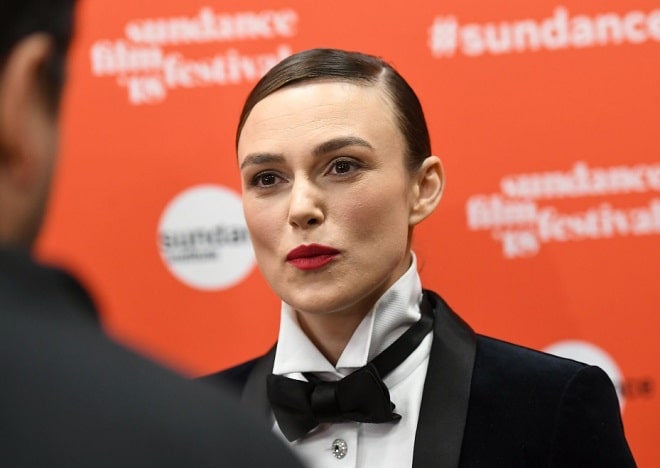 Keira Knightley, the owner of the most beautiful cheekbones in Hollywood, also faces skin rashes. 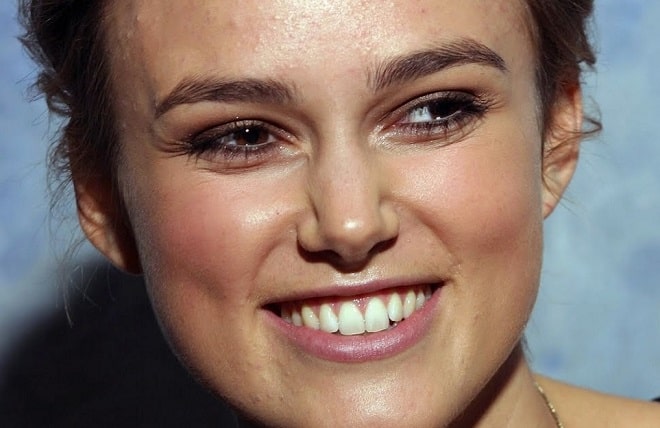 Subcutaneous pimples that arise from constant makeup are visible almost every time she goes on the red carpet. Keira herself admits that she has been suffering from acne since adolescence and the hope of getting rid of them is a thing of the past. According to the actress, she is afraid to imagine what her photos would look like in magazines and social networks if there were no graphic editors.