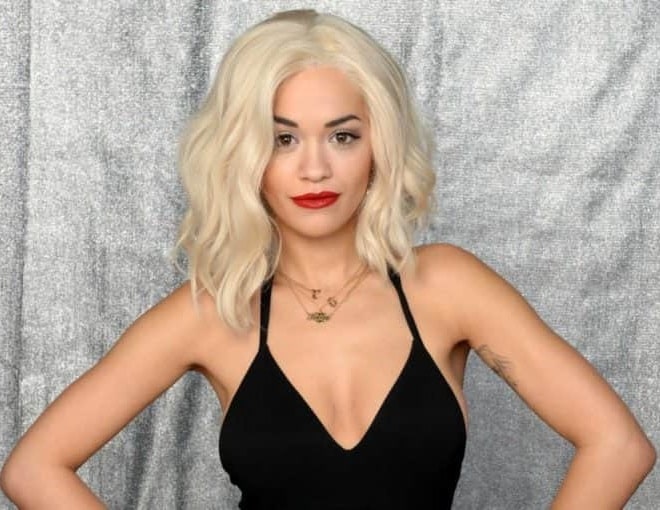 Rita Ora is a multi-faceted personality who has gained worldwide fame thanks to her singing talent, artistic, and design abilities. She successfully cooperates with Adidas”, Rimmel”, “DKNY”.

Rita Ora in her youth

The birthplace of Rita Ora is the Kosovo city of Pristina. Her mother is a psychologist, her father is a pub owner. Rita was born on November 26, 1990.

Rita lived in Pristina for exactly one year. Active military operations were conducted in her homeland at that time. For the sake of peace and security, the parents decided to move to a permanent place of residence in England. The family settled in London, near Portobello Road, the longest European shopping street. 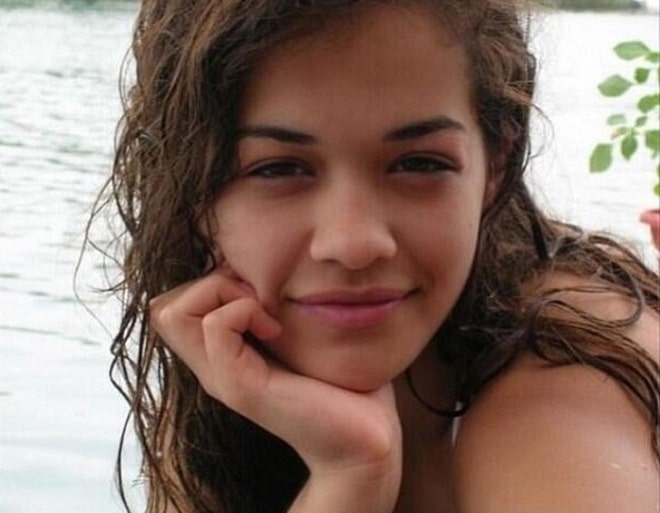 After receiving her secondary education, Ora becomes a student at the Sylvia Young Theater School, where she studies vocal, choreography, and comprehends dramatic art. The next place of study is St Charles CatholicSixthForm College (Kensington, Chelsea).

From early childhood, little Rita had a unique opportunity for public speaking. An active, talented girl who loves singing, used the most affordable option as a solo venue for performances – her father’s pub. With the help of her mother, she got the opportunity to perform at charity concerts. However, the girl clearly understands that she is capable of more.

At the age of 17, the aspiring singer takes part in recording a single by Craig David and shooting a music video by Craig.

The girl becomes a backing vocalist, participates in the release of the album of Morrison.

At the age of 19, Rita participated in the selection for the Eurovision Song Contest. Several selection stages were successfully completed. Although the singer later refused to participate in the competition, she managed to show high solo potential in front of professionals. 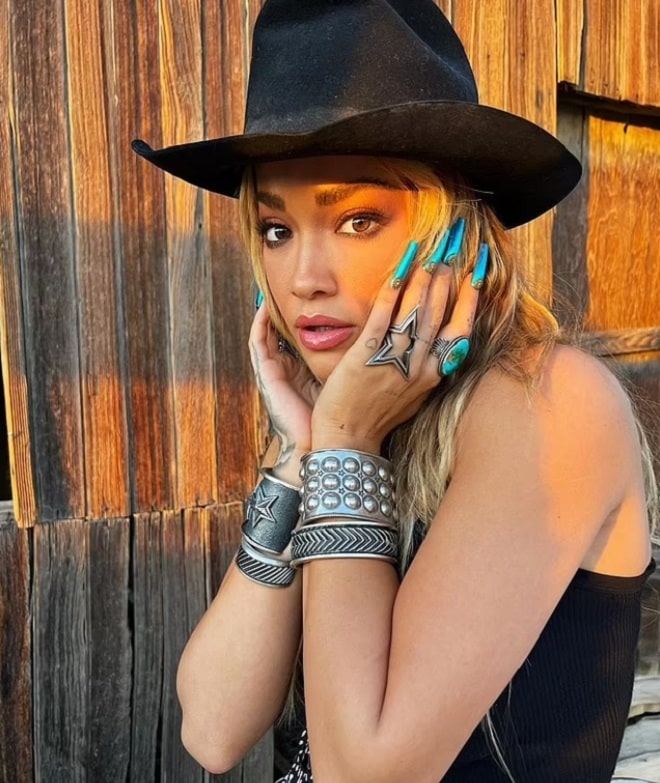 It was this audition that made it possible for the aspiring singer to get a recommendation for the head of the record label “Roc Nation”. Ora was invited to New York to collaborate with the most famous rapper Jay Z. Rita did not have an instant career takeoff, because at the same time Jay Z was busy unwinding Rihanna, Beyonce. However, Ora worked hard and after two years gained extraordinary popularity.

Rita’s versatile talents have long been known. She is not only engaged in musical creativity. Ora is acting in films, successfully engaged in the modeling business and her own fashion lines. The result of her collaboration with Adidas Originals in 2014 was the limited collection “Adidas Originals by Rita Ora”. Creating a collection from scratch, Ora admits, was unbearably difficult. But the young designer was saved by faith in his own strength and the desire to make clothes that would be pleasant to wear.

The trademarks “DKNY”, “Rimmel” also did not ignore the young beauty. In 2014, the singer became the face of the Roberto Cavalli fashion house. During the autumn-winter advertising campaign, she appears in the image of Marilyn Monroe.

Rita made her film debut in 2004. It was the movie “Spivs”. Then the actress starred in several more films.

Rita Ora, despite her busy schedule, always finds time for fans on Instagram. Quite often, the actress posts pictures from her personal archive, photos of various working moments. Some of the photos of the singer are quite frank, she does not hesitate to show her magnificent figure in all its glory. And must say that the singer loves outrageous.

In March 2021, New Zealand director Taika Waititi was spotted in Hyde Park in Sydney, Australia with a mysterious stranger, whom the paparazzi quickly recognized as British pop icon Rita Ora. 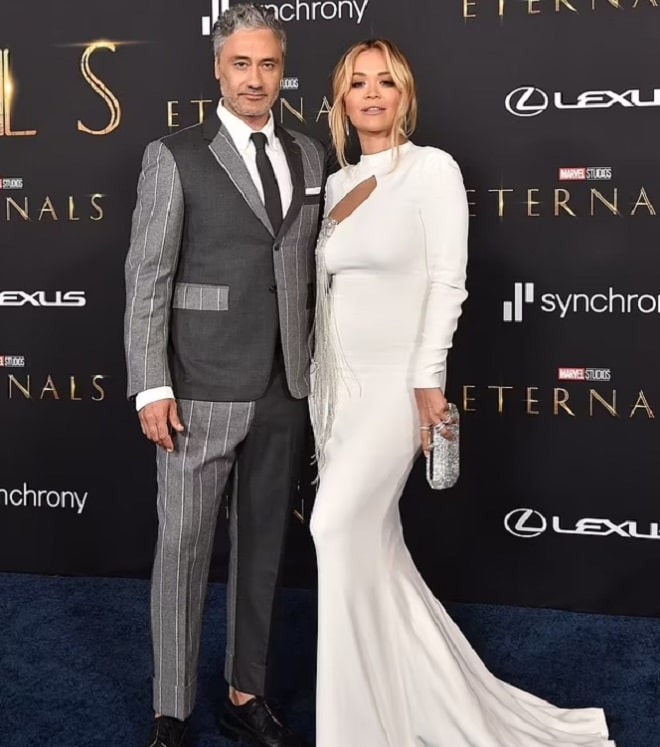 As it turned out later, Taika and Rita met on an Australian television program. Rita Ora was invited to television as the host of one of the TV shows.

It is quite obvious that the romance of a top Hollywood director with the roots of the New Zealand Maori tribe and an Albanian-British singer immediately took first place in the news columns of the world tabloids and in early December 2021 the couple announced their engagement and shared further plans for an official wedding. Rita Ora is 15 years younger than Taika, but this does not prevent them from making further plans for the future.

As insiders told the British tabloid “The Sun”, Rita Ora has really fallen in love with her chosen one. It should be noted that the New Zealand director, at the age of 46, is not distinguished by conservatism and makes a worthy pair of a British singer who loves nonconformity and rebellion in men.

After the announcement of the engagement, the British singer told the press that she “did not expect to find love in Australia and was not looking for it,” and the New Zealand director began publicly calling his beloved “wifey.”

Did Rita Ora have plastic surgery?

Rita is not only the leader of the music charts but also a star with a bright appearance. Scarlet matte lips, platinum blonde, and dark eyebrows, nobly contrasting with blonde hair — this is the recognizable image of Rita. 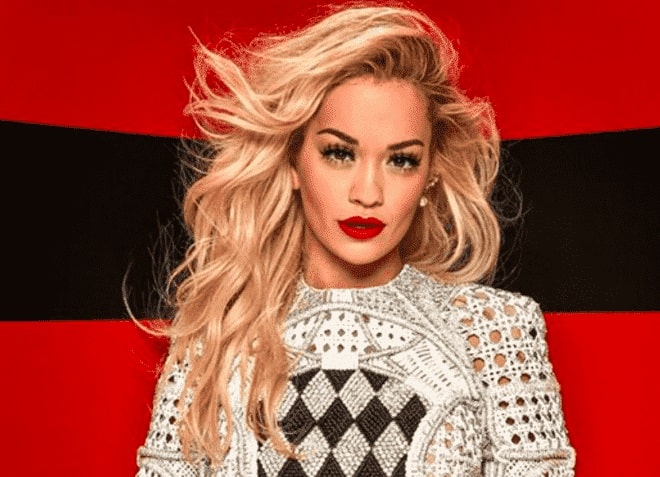 “I like to exaggerate everything”, Rita Ora said in an interview. And she confirms this statement with every appearance. She combines lush and extremely feminine, glamorous styling, red lipstick, fluffy false eyelashes, black arrows, accentuated eyebrows — in every feature grotesque, literal, and straightforward, no hints and subtexts. Rita is not afraid to “overdo it”, combining several accents in her image at once.

One of the inspirers and icons of Rita’s beauty is Marilyn Monroe. According to the star, she is a fan of all films with her participation, so it is not surprising that platinum-tinged hair, scarlet lips, arrows, and an accent on her eyebrows have become integral parts of her image — everything is like a legend of cinema.

The star revealed her secret of perfect appearance. The main secret of Rita Ora’s beauty is her cosmetics. 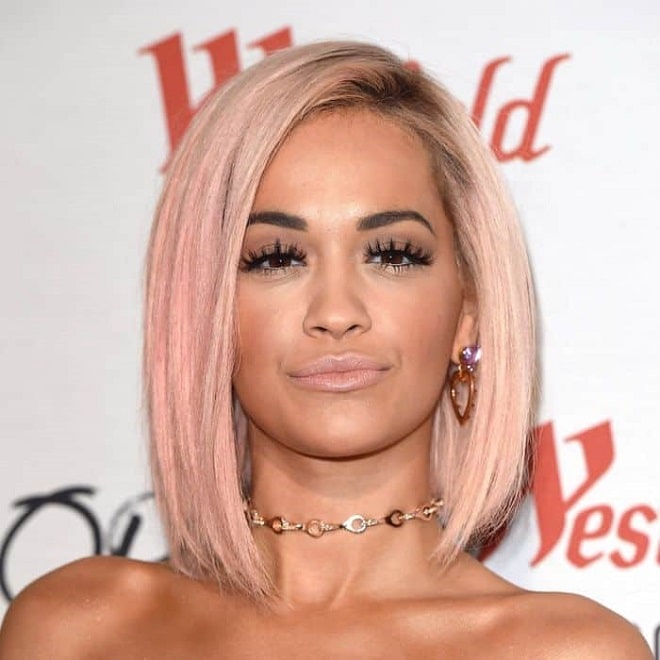 Wherever Rita appears, on the red carpet or on a morning walk, the star always looks perfect. It is difficult to meet her without bright makeup and styling: scarlet lips and soft blonde curls have become a peculiar feature of the singer.

Her bright appearance is the subject of the attention of many fashionistas and fans. The star revealed her secret of flawless appearance. As it turned out, everything is very simple: a “ton” of cosmetics is responsible for Rita’s excellent appearance.

This is evidenced by the photo on Instagram of the girl, which captures a lot of cosmetics – ranging from concealers, ending with a dozen shades of lip gloss.

Of course, the star also has to say “thank you” to the numerous stylists who work on her images. 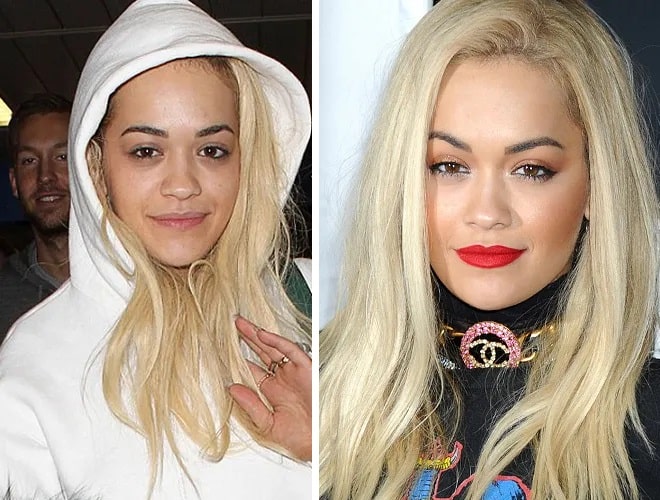 Rita always does too bright makeup. It seems to us that even the most devoted fans will hardly recognize her without makeup.

Did Rita Ora have a breast augmentation?

Rita is not at all shy about showing herself in public in revealing outfits and shows off her perfect cleavage at the first opportunity. However, the singer admitted that as a teenager she hated her breasts.

“I was the first one to grow breasts, and I hated it until the coolest guy in school asked me out. That’s when I fell in love with her!” recalls Rita Ora.

Looking at today’s photos of Rita, it’s hard to believe that the singer had complexes. Today, the star is not just not shy about his chest, but also openly demonstrates it. But when the girl was 14 years old, her breasts caused her a lot of inconveniences. Rita Ora felt awkward in her youth when she had to wear a tight bodysuit to ballet classes. Only over the years, the star admitted to herself that she was not destined to be the thinnest girl in the world. 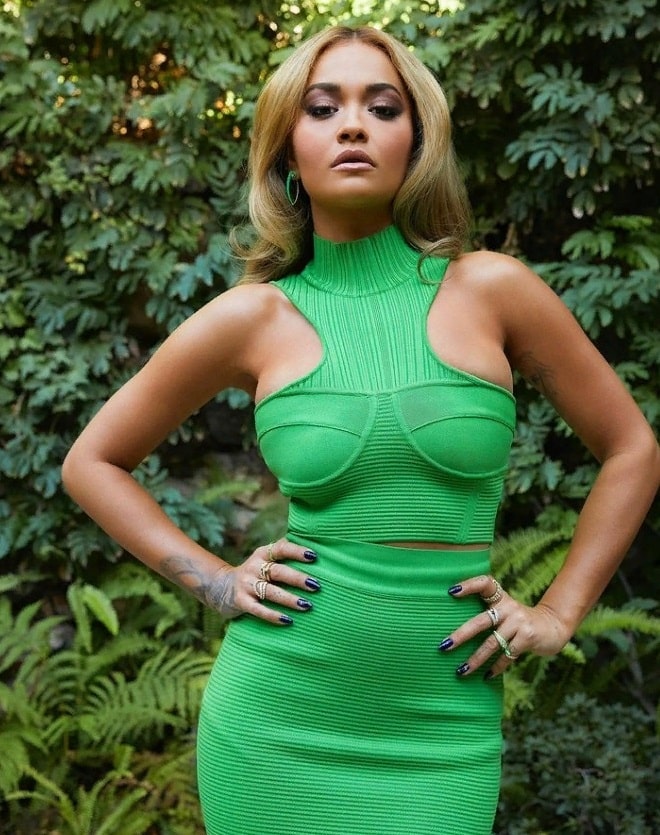 Today Rita Ora wears revealing dresses and tops, not being shy about her breasts. The star is sure that the deeper the neckline, the better. Sometimes the celebrity even “forgets” to put on a bra.