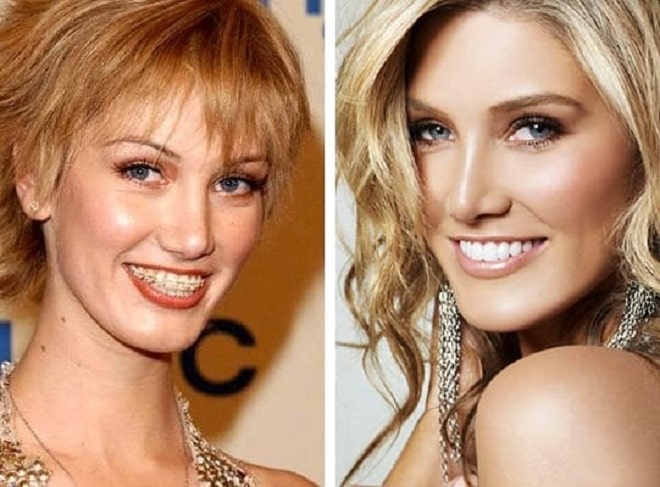 Delta Goodrem’s smile changed after a professional dentist worked on her teeth. Delta Goodrem came to the main Grammy music ceremony in braces and made a real splash.

Delta Goodrem is rightfully considered one of the brightest Australian stars. Having signed her first professional contract at the age of 15, she played in the popular TV series “Neighbours”, after which she began her career as a singer.

To climb to the top of the musical Olympus, talent alone was not enough: attractive facial features and gorgeous blond hair helped Delta win many fans, but at the same time she was well aware of her shortcomings. The singer had a curved dentition, which was not corrected in her teenage years. Her career was rapidly gaining momentum, so the star decided to put braces on her teeth as soon as possible.

Having made this decision, the singer immediately went to the orthodontist, who installed braces for her. In those years, many stars (as, indeed, ordinary people) they were embarrassed by their smile in braces and tried not to show it as much as possible. But Delta Goodrem was the complete opposite: She toured extensively during this period and recorded a very successful album that literally blew up the Australian and English charts.

Of course, in the wake of such success, Delta became one of the most welcome guests at the Grammy 2004 ceremony. Under the sight of dozens of cameras, the girl did not fade away at all, but openly and sincerely smiled: her photos with braces were subsequently published by dozens of major agencies.

After the end of orthodontic treatment, Delta Goodrem installed veneers and received a dazzling Hollywood smile, and today continues to delight us with her creativity.