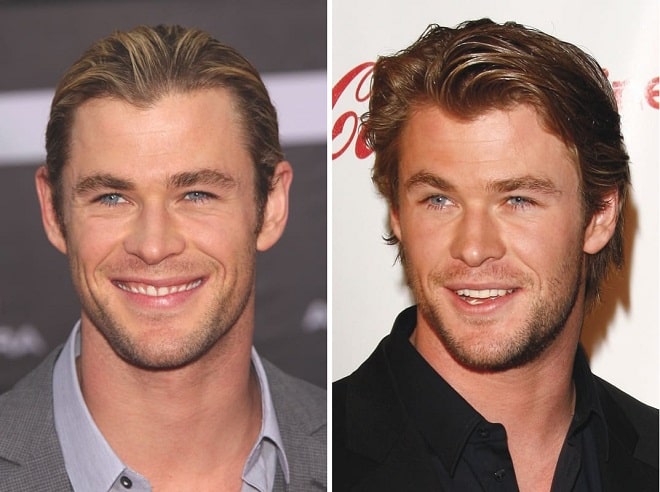 Chris Hemsworth is an Australian-born Hollywood actor. Chris’s popularity was brought by the role of Thor. In addition to the role of the Scandinavian deity, Hemsworth’s creative biography includes dozens of roles in feature films and TV series.

The stereotype that the cutest actors playing the roles of supermen in American blockbusters come from the USA is gradually being destroyed. There is no need to go far for examples: charming Chris Hemsworth grew up in Australia. It is no coincidence that Australians are called one of the most smiling people in the world!

Despite the fact that Chris Hemsworth, being a naturally blue-eyed blonde, has never suffered from complexes about his appearance, the flaws of his smile in early photographs are visible to the naked eye. The actor’s teeth are too “wrapped” inside, they are not the same size, and their color leaves much to be desired. But a slight unshaven and mischievous sparkle in the eyes more than compensate for this small drawback.

After the release of the film “Thor”, in which Hemsworth played the role of the ancient god of the same name, People magazine awarded him the status of the sexiest man on the planet. Apparently, this prompted the actor to work on his smile under the guidance of a professional dentist: Chris’s teeth clearly became smoother and whiter, which only added to his attractiveness.