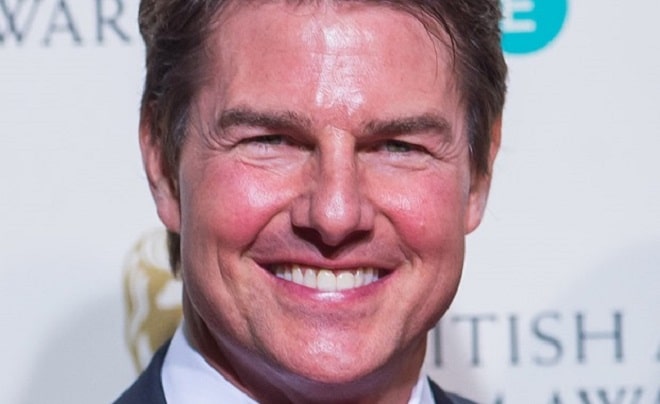 Tom Cruise is an actor, director, screenwriter, producer. He was awarded the Golden Globe Award three times and was nominated for an Oscar three times. The real success came to him after the release of the movie “Mission: Impossible”.

The name of the American actor and director Tom Cruise is well known in the world. Now he has a high-paying job, nominations, awards, which he did not even dream of as a child. He, a boy who grew up in a poor neighborhood with dental defects, did not even dream that one day he would become the famous and richest actor. That he will have a million army of fans, the love of the most beautiful women, and a dazzling Hollywood smile. He wanted to become a priest, but fate had completely different plans for him.

Tom Cruise in his youth

Tom Cruise was born on July 3, 1962, in the American city of Syracuse, New York. The family had many children, besides him, three other sisters were. Tom was the third child of his parents. The boy’s mother was a teacher by profession. His father was an engineer. He could not find a decent job, so the family often changed their place of residence, hoping that the father of the family would someday be able to find a suitable place. They lived poorly and were not very happy because their father was a real tyrant. He was rude to his wife and children, unfairly found fault with them, could even beat them, and without any reason. 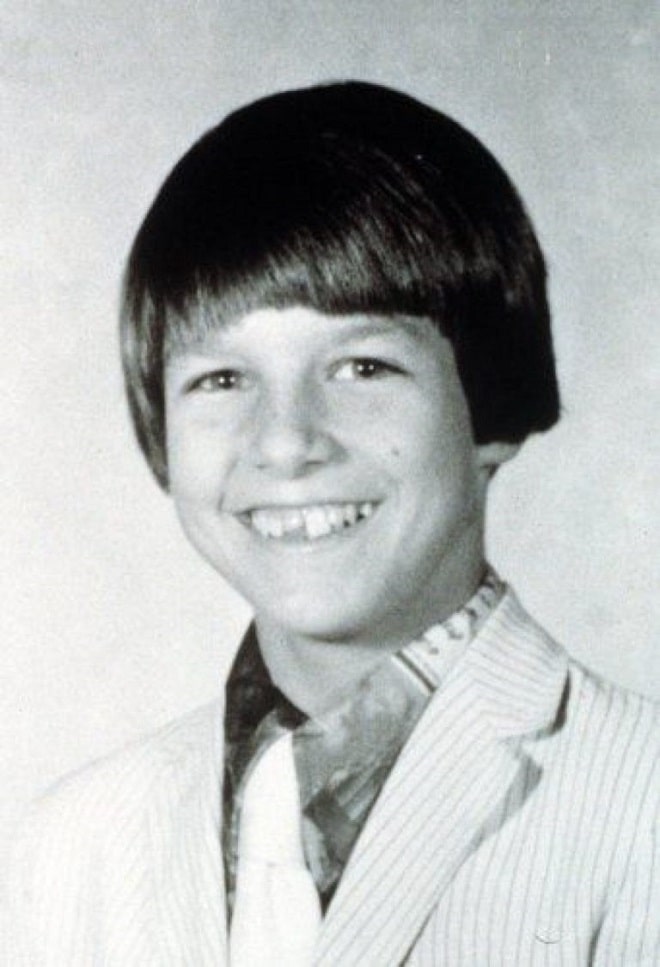 Tom had crooked teeth as a child, which he was ashamed of. 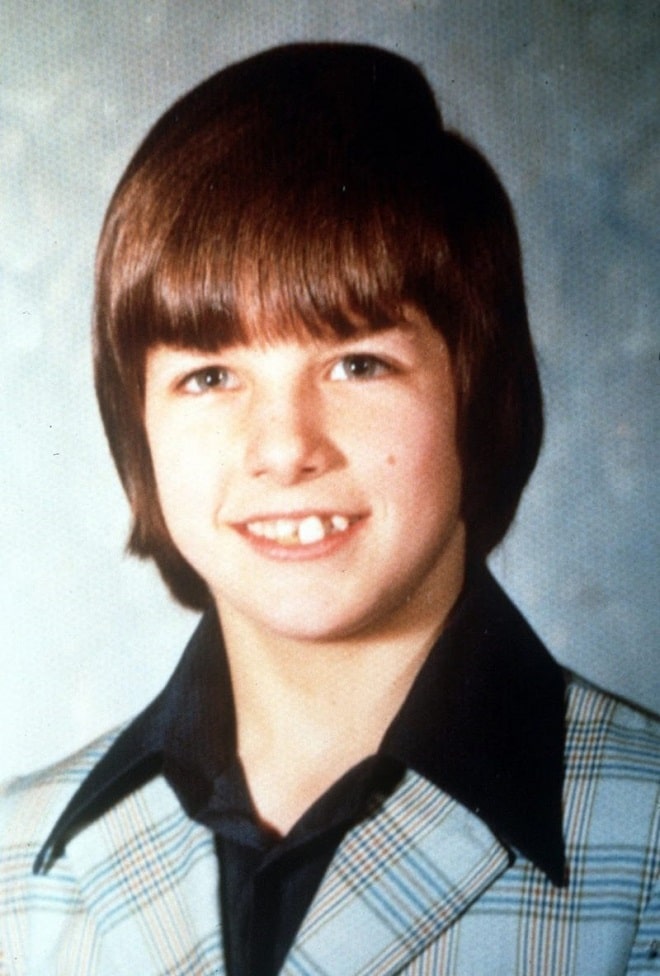 The dream of being on stage appeared to him at 16, when he got on stage for the first time in the musical “Guys and Dolls”. And before that, he was seriously going to become a priest. However, he abandoned his idea, because he firmly decided that his vocation was in acting. 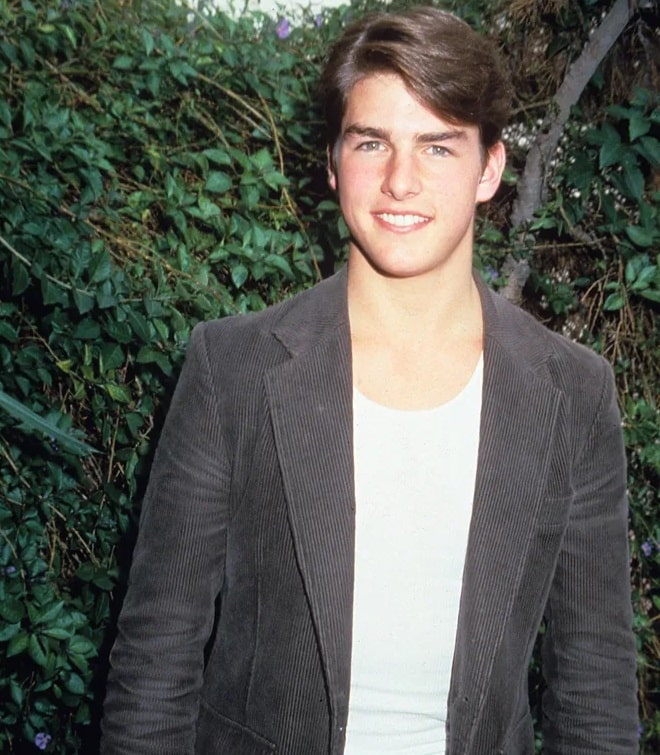 In 1980, the guy decided to move to New York. He wanders through endless auditions, and only a year later he manages to get a role in the film “Endless Love”. Tom Cruise’s creative biography began in the role of Bill. After that, he was called several times in episodes, and he got his first major role in 1983, in the film “Risky Business”. 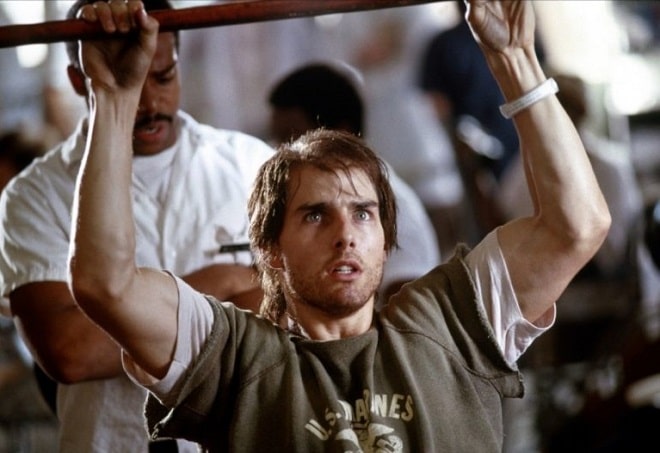 Tom Cruise in “Born on the Fourth of July”

But Tom Cruise became a Hollywood superstar after filming in the film “Top Gun”. After that, there were many successful projects, including “The Color of Money” and “Rain Man”. After the release of the tape “Born on the Fourth of July”, Tom received a Golden Globe and was nominated for an Oscar.

Tom Cruise’s filmography is quite extensive, but he reached the peak of popularity in the film “Mission: Impossible”. In addition to playing the role of the main character, he tried himself as a producer for the first time.

Such is the fate of public people – to be constantly visible not only at work but also outside it. Of particular interest to fans is always the personal life of their idols. Tom Cruise was no exception, a million-strong army of fans, and especially female fans, constantly monitor all the changes that occur in his life. 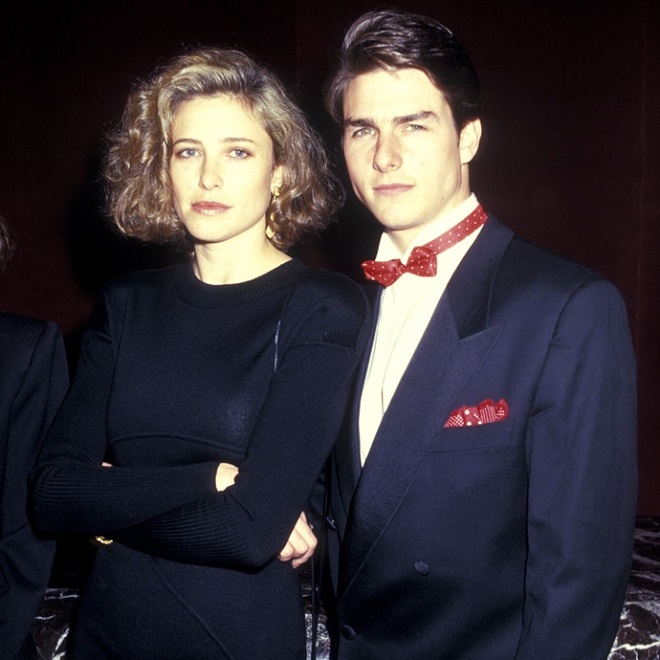 The actor had three official marriages. He married actress Mimi Rogers for the first time in 1987. They lived for three years, they were considered an exemplary couple, but still broke up. The reason was Tom’s refusal to move to Los Angeles. There were no children in this marriage.

In 1990, actress Nicole Kidman appeared in the actor’s personal life. They first met on the set of the film “Days of Thunder”. The young people did not delay the registration of the relationship and married after Christmas in the same year. Everyone considered this couple the strongest, their marriage lasted eleven years. They had no children of their own, so the couple issued the adoption of two foster children. 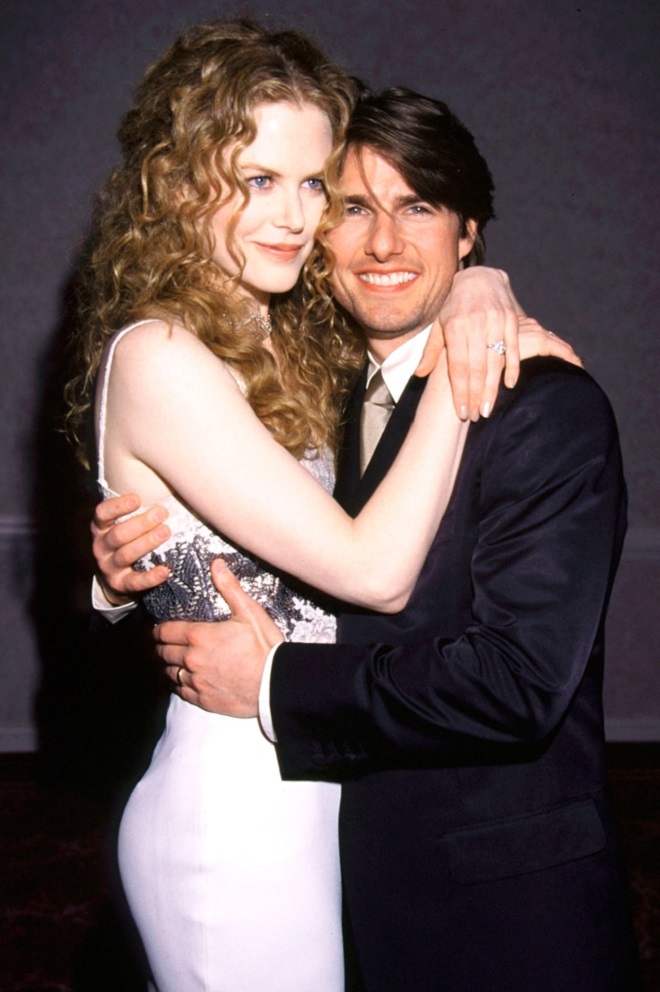 In 1999, director Stanley Kubrick invited the couple to shoot the film “Eyes Wide Shut”. According to the plot, they were also spouses who could not solve family problems in any way. This film seemed to become prophetic because two years later they decided to divorce. According to the official version, the most beautiful Hollywood couple was divorced by employment at work. During the divorce process, Cruise paid his ex-wife $ 10 million. 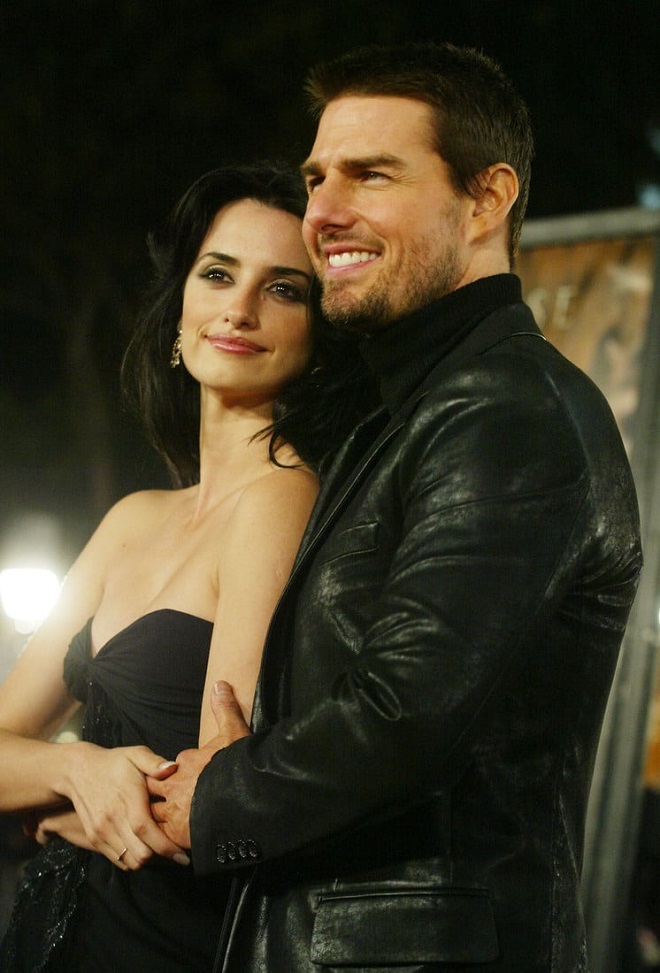 In 2001, another actress appeared in Cruise’s life – Penelope Cruz, his partner in the film “Vanilla Sky”. They were together for three years but did not formalize their relationship officially. They soon broke up, for the reason that Penelope continued to be jealous of Tom’s ex-wife. 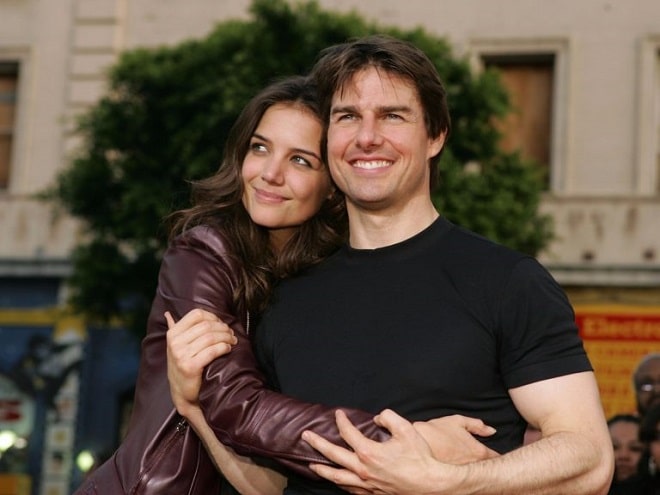 In 2005, the encounter between Cruise and his third wife Katie Holmes took place. The novel was very beautiful, widely covered in the press. Tom decided to propose to his beloved only when their daughter Suri turned 6 months old. The place for a romantic proposal was the city of all lovers – Paris. Katie received a ring with a charming diamond as a gift. The wedding celebration took place in Italy in 2006. 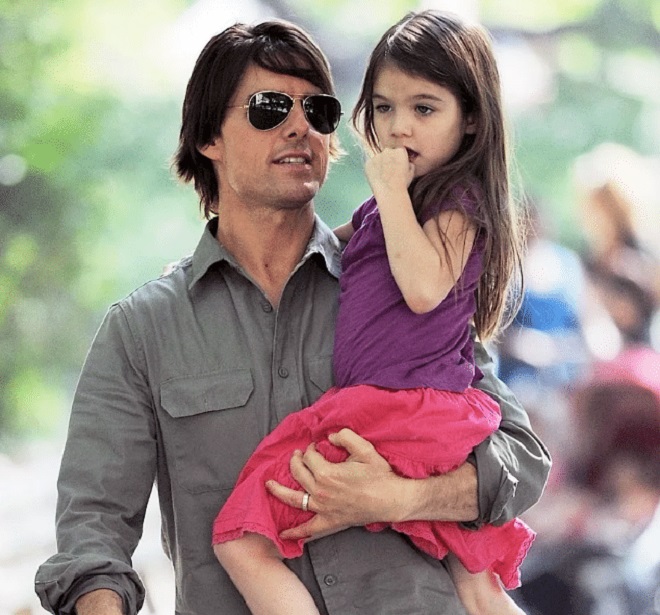 Tom Cruise with his daughter

This marriage lasted 6 years and ended in divorce in August 2012. Tom Cruise continues to communicate with his daughter, he loves his baby. 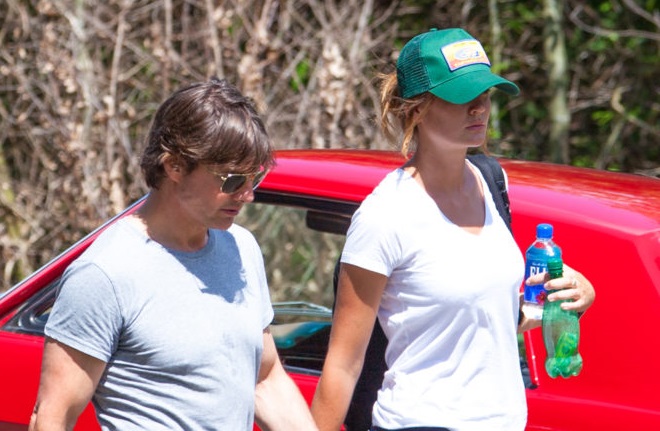 In 2015, it became known that the actor had a new favorite, Emily Thomas, who works for Cruise as a personal assistant. Despite the age difference of 31 years, the lovers are happy.

Like most stars, Tom is not without oddities. The most interesting thing about Tom Cruise’s biography is his desire to preserve his youth in every possible way.

According to rumors, the actor does not disdain the most exotic masks and it does not pass without a trace: looking at Tom’s photo, it seems that since the 80s, when his rapid career began, his face has not aged, but even fresher and prettier.

However, journalists and colleagues do not believe in the miraculous power of grandmother’s beauty recipes, and all the merits of Tom Cruise are attributed to plastic surgery. And the actor himself, as befits star, strongly denies his commitment to aesthetic medicine. 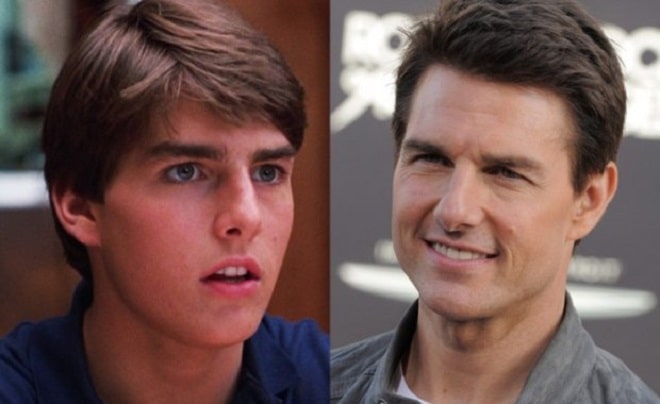 Like most actors, Tom Cruise had a nose job, as a result, a wide, large nose decreased in size, the hump on the nose disappeared, and the bridge of the nose became thinner. Thanks to rhinoplasty, the aesthetic appeal of Tom has increased many times, a thinner, elegant, and even nose made the man’s face very attractive. 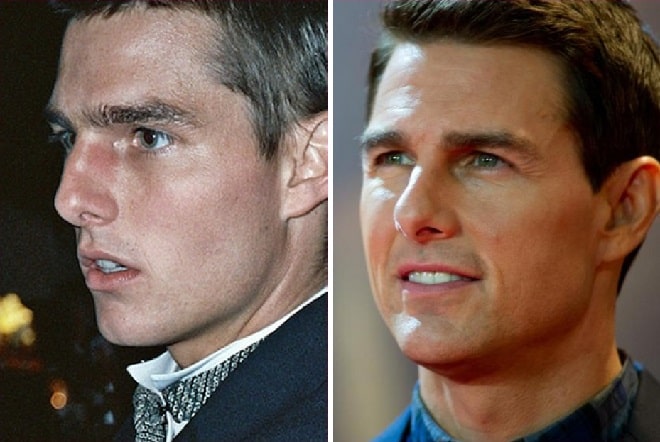 The actor Cuba Gooding (he starred with Tom in the movie “Jerry Maguire” in 1996) admitted that he once caught his colleague for cosmetic procedures.

“Once I went to his house without warning and noticed the dots from the syringe on his face. I immediately realized that he was not happy to see me. And, in general, it was clear to me why”, said Cuba on an American talk show.

And another friend of the star told reporters that in 2011, Tom Cruise turned to the famous Brazilian surgeon Ivo Pitanguy, who performed Tom’s facelift.

A few years ago in 2016, the world was already discussing Tom Cruise’s unrecognizable face.

In the photos of Tom from the BAFTA film ceremony, the fascination with plastic surgery can no longer be hidden. The actor’s eyes are unnaturally narrowed as if he has forgotten his sunglasses and is looking at the open sun (but everything happens indoors). His face is shiny, and his skin is stretched and gives the impression that it is worth a lot of effort to smile at the actor. Fans joke and write on the Network that Cruise just fell face-first into a hive and was bitten by a million bees, that’s why he was so swollen.

But seriously, then, most likely, this is a side result of a cosmetic drug, and Tom, who does not like to remain without action, simply did not sit out the prescribed time at home after the procedure and appeared in public too early. 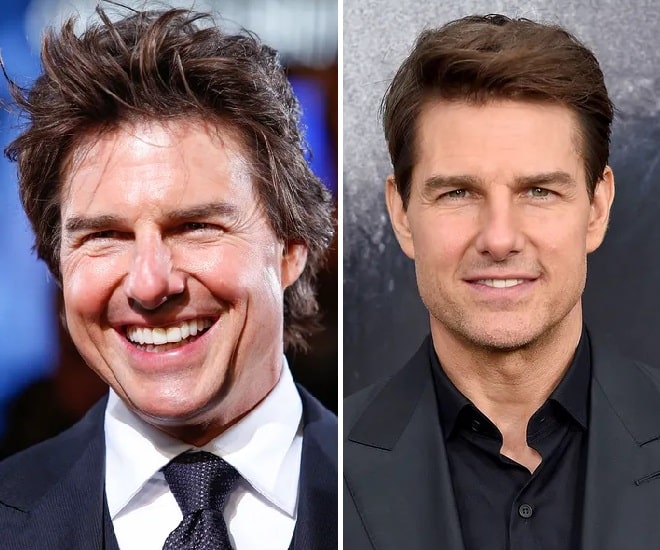 Yes, the handsome actor also had to wear braces, albeit almost imperceptibly, and for only a few months. 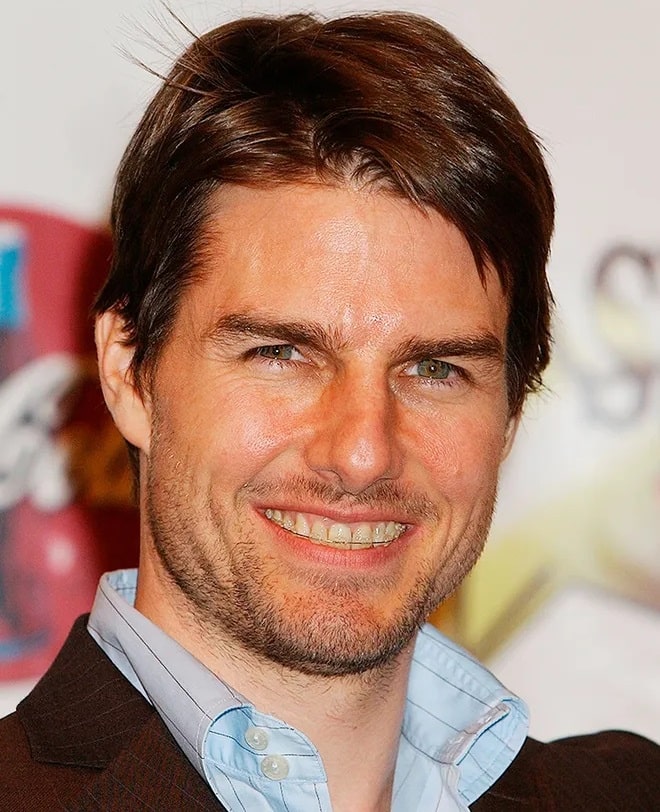 Now the actor’s smile is perfect, everyone knows that.

Tom Cruise’s photo can be found in almost every rating or review on dentistry. And few people know that dental procedures of varying degrees of complexity played a major role in the amazing transformation of a nondescript boy with crooked teeth into a sex symbol. 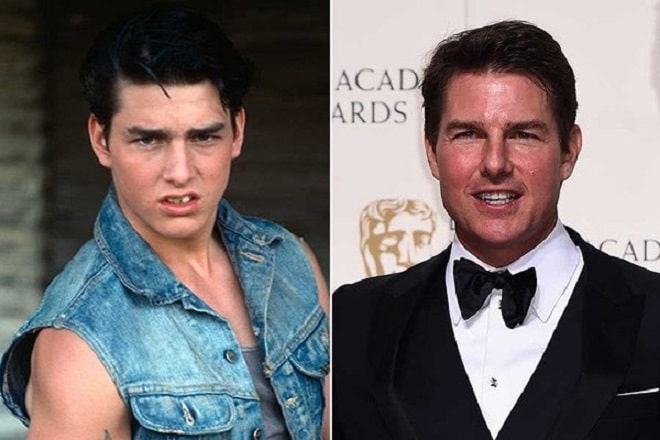 In childhood, and then in adolescence, Tom had such serious problems with his teeth that one could not even dream of a career as a film actor. Crooked bite, multiple caries, fillings in almost every tooth! One of them in the front row turned black and really spoiled Tom’s appearance.

His teeth were bad by nature, and in his youth, Cruise was terribly shy, which is evident even from the photos of those times: you can’t find him smiling on them. A serious inferiority complex developed, which Tom could finally defeat only by the age of forty. Now, looking at Tom Cruise’s teeth – before and after the intervention of dentists – it’s hard to believe that they belong to the same person.

In general, if we talk about Tom’s external data, it is unclear why the young Cruise decided to choose the profession of an actor: in addition to the far from perfect teeth that disfigured his face, his short stature can be attributed to his shortcomings. However, now Tom Cruise is a vivid living example of how to make the impossible possible. Only the actor himself knows how much effort it cost.

He tried all dental innovations and the latest achievements of dentistry on himself: braces, veneers, professional whitening, etc. 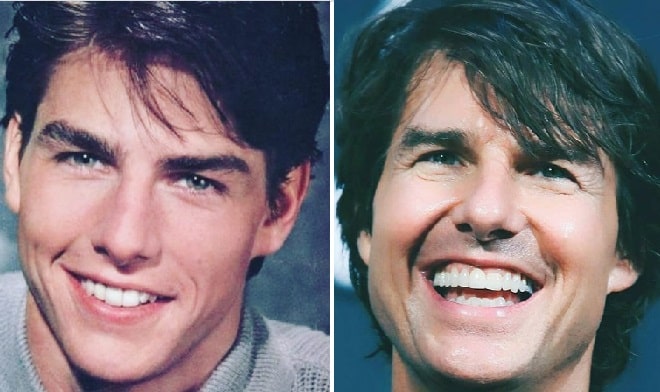 He got rid of the blackened tooth and installed an implant, correcting the bite. He put super-expensive crowns on many of the teeth. A bracket system for leveling the dentition was installed for Cruise when he was already a popular actor. Although, especially attentive people may consider a small defect of Tom’s Hollywood smile. Even now, after so many manipulations, the right front incisor is slightly shifted to the center, which makes it seem that Tom Cruise has a tooth in the middle of his face.

The funds spent on dental services have paid off many times: millions of fees have covered all expenses. However, even now Tom Cruise is not relaxing, the struggle for the main roles continues and ceramic veneers are placed on the teeth. 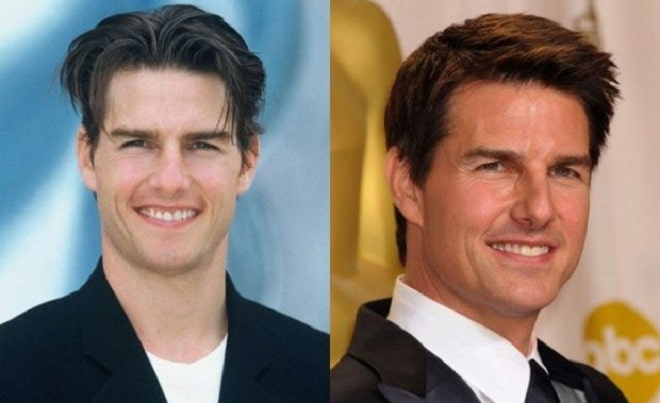 The actor had to make sure from his own experience that the “Hollywood smile” is not just a beautiful combination of words but in fact an important component of success in his life.