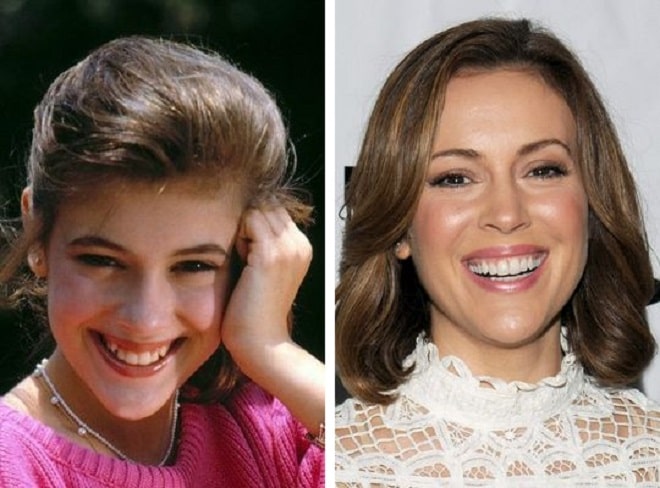 To achieve a great smile, Alyssa Milano needed several stages of orthodontic treatment and the installation of veneers on her teeth.

From early childhood, Alyssa Milano attended famous Broadway productions: it was then that she firmly decided to become an actress, having received her first small role in a musical at the age of eight. There were no significant obstacles for Alyssa to achieve such a goal: in addition to the obvious talent, the girl had an almost angelic appearance. Her only drawback was her uneven teeth. This was especially true of the upper canines, which were noticeably curved and stood out among the entire dentition.

The braces that the star put on as a child noticeably corrected the situation. Immediately after that, Alyssa began her career as a singer, which developed very successfully (she even has a platinum album on her account). But Milano wouldn’t be herself if she didn’t want to achieve the perfect smile. As the star herself admits, in order to correct and consolidate the result, she regularly visits the dentist, and also wears mouth guards and retainers. Such a tremulous approach to her smile brings very good results: according to the results of numerous surveys, Alyssa Milano is almost always among the top stars with the most attractive smile.

In addition, there are rumors that she had breast augmentation surgery with implants. Her breasts look a little different in different outfits, but there is no obvious evidence that she had a boob job. Most likely, some change in breast size could be due to weight fluctuations during pregnancies and the use of a push-up bra.