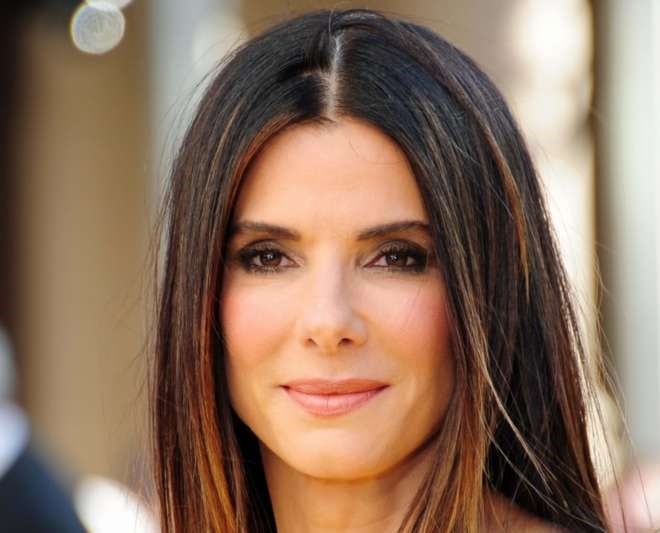 Sandra Bullock is a Hollywood actress, winner of the Oscar for Best Actress in the film “The Blind Side”. The head of her own production center, the owner of the restaurant, and the most beautiful woman according to the magazine “People”.

Sandra Bullock in her youth

The actress is originally from Arlington, Virginia. Sandra was born on July 26, 1964, in a creative American family: her mother was an opera singer, and her father was a vocal teacher. Another girl grew up in the family – Jesin, Sandra’s younger sister. Her parents dreamed that their daughter would connect her biography with the world of music: she studied piano and studied vocals with a teacher.

However, the prospect of becoming an opera star or pianist did not appeal to little Sandra, and she tried her best to avoid going to music school. There was a case when a girl was given a small role at the Salzburg Opera House, from which the future star arranged a circus. After that, the parents gave up and no longer insisted on their daughter’s musical career. 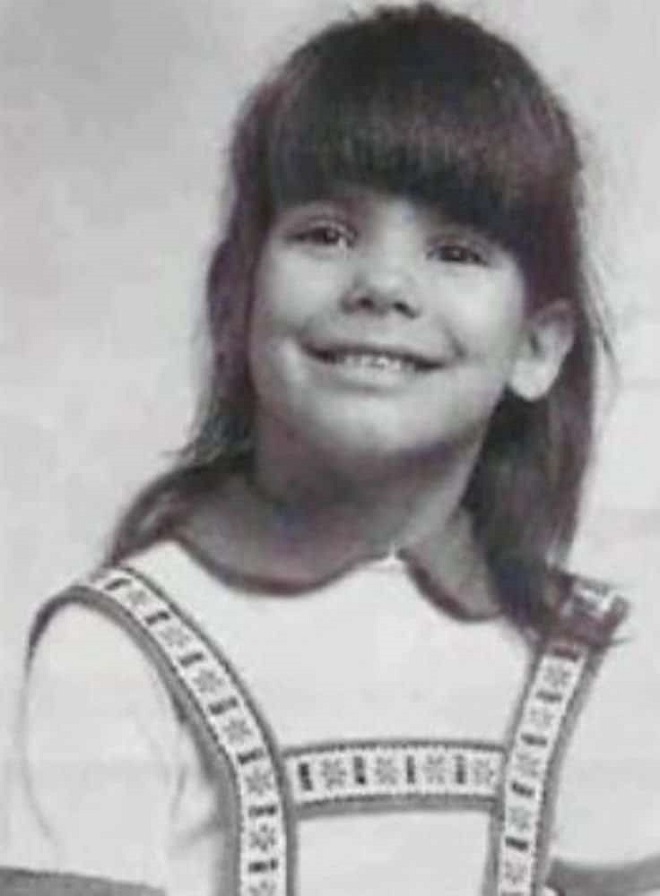 The Bullock family spent a lot of time traveling, often flying from America to the European continent in connection with their mother’s tour. When Sandra reached the age of 12, they finally settled in the States. At first, the schoolmates shunned the girl, considering her a foreigner. But after a while, Sandra’s sociability forced her peers to take her side. She was even entrusted with an honorable mission – to lead the support group of the school’s football team.

After graduating from school, the young beauty entered the university for law school but soon realized that it was not her at all. The girl moved to New York, where she planned to become a flight attendant or model. Rosy dreams were not destined to come true – instead, a 22-year-old girl was to work as a waitress in a cafe. It was necessary to survive, and Sandra took on any job, having managed to try herself as a bartender and even a cloakroom attendant.

Working in cheap eateries, the girl did not give up the dream of becoming famous. Having saved up money, she enrolled in acting courses, and after graduation, she tried to realize her talent in New York. In this city, the actress’s career did not work out, and the future Hollywood star moved to Los Angeles. As it turned out later, not in vain.

At first, Bullock starred in small roles in low-budget films. But it was enough to get her noticed by critics and began to give good reviews. They started talking about the young actress, and the directors began to invite her to shoot in a TV series. 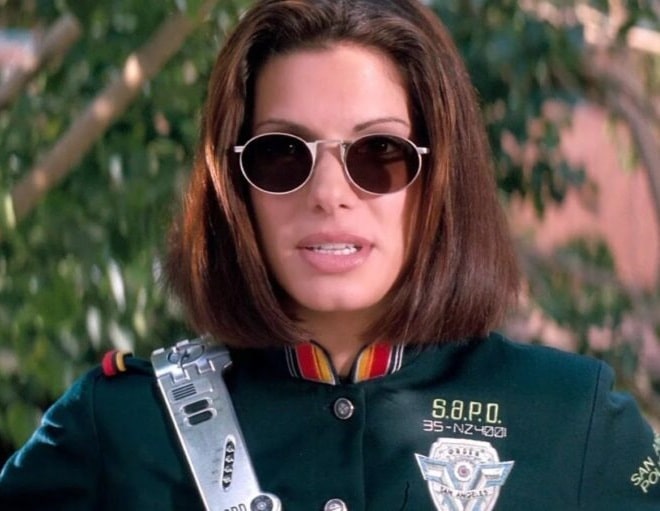 Her first serious acting work was the comedy film “Working Girl”, which the viewer watched in 1990. After that, Sandra disappeared from the screens for three years. But in 1993, the young star starred in five films at once, one of which was “Demolition Man” — an action movie with elements of fiction. Her partners on the set in this film were Sylvester Stallone and Wesley Snipes. Film critics and viewers took the film skeptically, but many appreciated the comedic performance of young Sandra.

Bullock’s work “Demolition Man” caused a mixed reaction among moviegoers. Despite the fact that the audience liked and remembered the aspiring actress, she was nominated for the Golden Raspberry anti-award as the worst actress of minor roles. 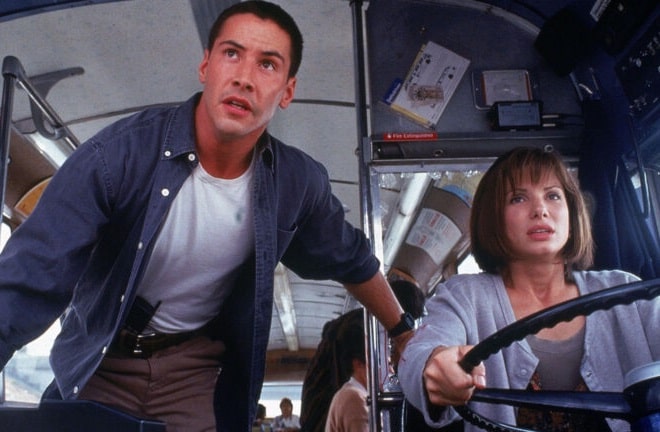 Sandra Bullock with Keanu Reeves in the movie “Speed”

The dubious success of Sandra did not confuse famous directors, and she was invited to Hollywood films for more significant roles. The real rise in her career happened in 1994 when the girl starred in “Speed” with Keanu Reeves. After the release of the film on the screens, Bullock became popular far beyond America. She was talked about as the most natural Hollywood star and the best actress who managed to embody action characters.

Sandra caught a wave, created her own production studio, and played the main roles in the films “The Net” and “While You Were Sleeping”. These films were a huge success with the audience, but then the career of the star declined. 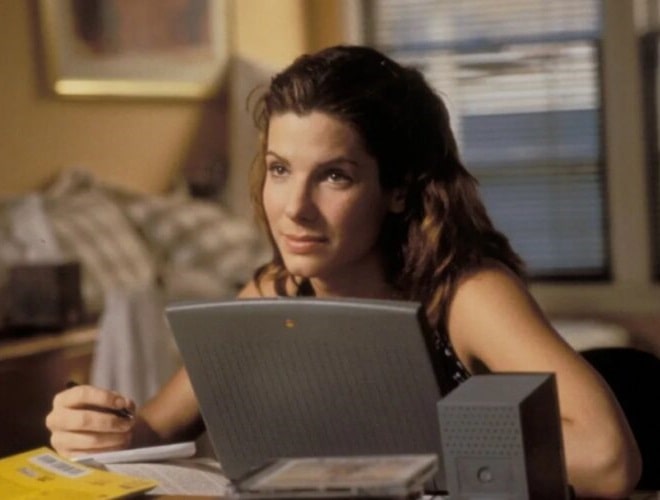 Sandra Bullock in the movie “The Net”

Bullock’s popularity revived in 2000 when the film “Miss Congeniality” was released. Here the comedic talent of the actress was fully revealed, the audience was delighted. The box office grossed more than 200 million US dollars. The role of FBI agent Gracie Hart brought Sandra a Golden Globe. As is often the case, the continuation of the film was not as successful. Such a failure forced the actress to declare the transition to low-budget films.

In 2002, the premiere of the romantic comedy “Two Weeks Notice” took place, where the handsome Hugh Grant became Sandra’s partner.

The film “Crash”, which had a budget of about $ 6 million, became the leader of the rental and three Oscar statuettes in different nominations at once. 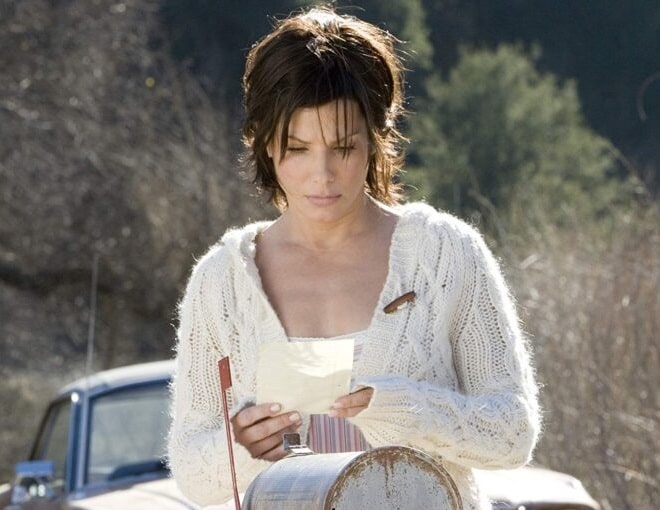 Sandra Bullock in the movie “The Lake House”

In the late 2000s, the star starred in a number of films, where she became the performer of the main roles: the drama “Infamous”, the melodrama “The Lake House”, the thriller “Premonition”.

In 2009, Bullock was awarded paradoxical awards: an Oscar and a Golden Globe for her participation in the movie “The Blind Side” and the Golden Raspberry anti-award for the worst acting performance in the “All About Steve”. 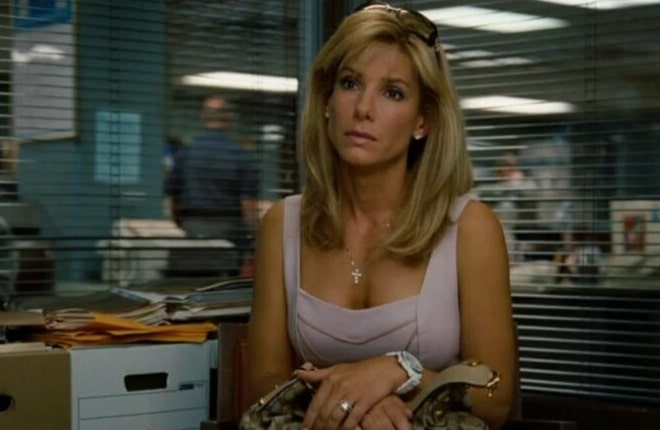 Sandra Bullock in the movie “The Blind Side”

Two more films, where the star in the main roles, were released in 2013. The comedy “The Heat” and the drama “Gravity”, which was recognized by critics as the best film of 2013. Bullock played one of her most powerful roles, and won an Oscar.

In 2015 the filmography of the actress was replenished with another main role. In the comedy film “Our Brand is a Crisis”, she played a political strategist whose task was to organize the presidential elections in Bolivia. 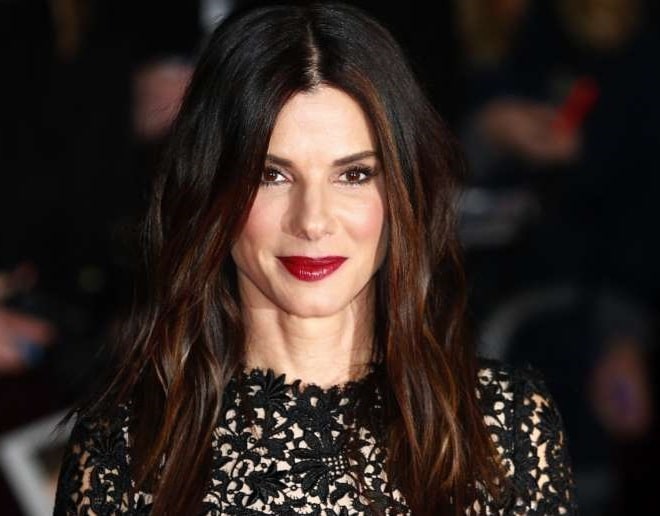 Now the actress continues to act in films. Sandra Bullock is a world-class actress. In her filmography, both brilliant masterpieces and failed films coexist. The film star has its own star on the Hollywood Walk of Fame.

Sandra Bullock got married at the age of 20. Her husband was the actor Jean Vincent. The union turned out to be very short-lived, and currently, the actress prefers not to remember about it. 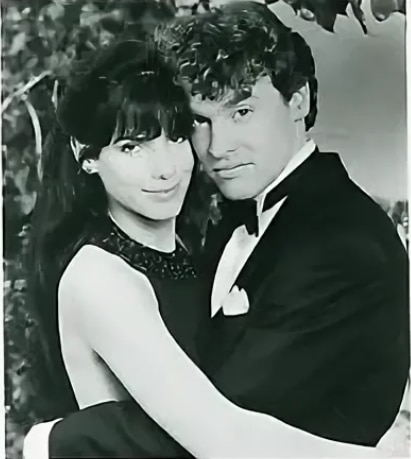 There was also a dream man in Sandra’s personal life–she considered Tate Donovan to be such. They met on the set of the movie “Love Potion Nr.9”, but soon separated. The actress was very hard going through the breakup, and for a long time could not overcome depression.

There were many interesting men of different ages in the biography of this bright woman, but all the novels ended in parting.

In 2004, Sandra married Jesse James. Six years later, the couple adopted a boy, Louis. During the same period, the press began to exaggerate rumors about Jesse’s adventures on the side, and Sandra was forced to file for divorce. In 2010, the family broke up. 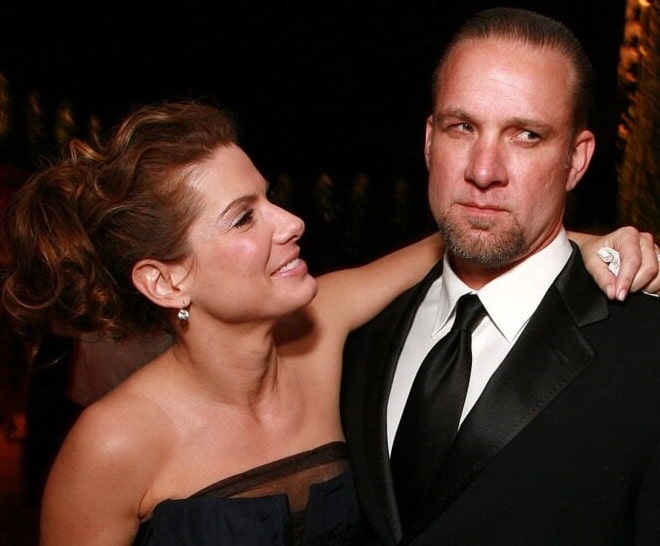 Bullock is now raising two adopted children, Louis and a girl, Lila, whom she adopted in 2015.

After the filming of the movie “The Proposal”, rumors about the actress’ love affair with Ryan Reynolds appeared. Both actors denied this information until Ryan broke up with Scarlett Johansson. After that, they stopped making a secret of their relationship, which, however, was short-lived.

In 2015, the press started talking about changes in Sandra’s personal life. Photographer Brian Randall was a new passion of the actress. Journalists vied with each other to publish the expected date of the engagement, which, in the end, never took place. 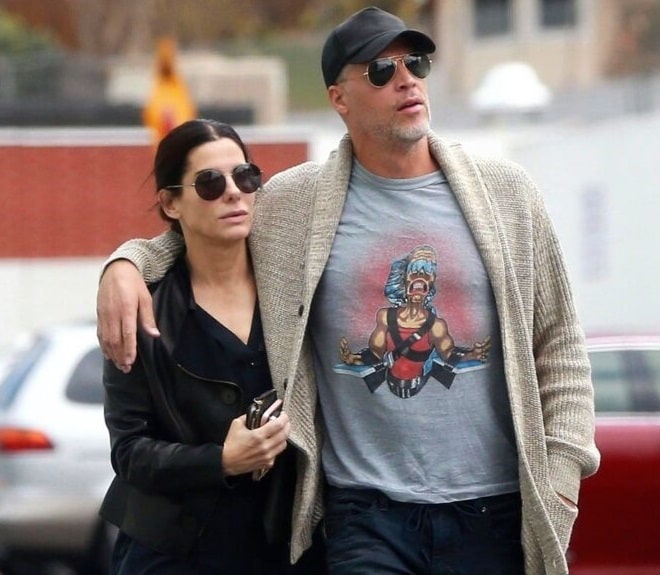 Did Sandra Bullock have plastic surgery?

Now Sandra Bullock, who was famous in Hollywood for the appearance of a “cute girl” from the thriller “Speed”, is already over 50. Fans of the star are perplexed: Sandra looks fresh and young. 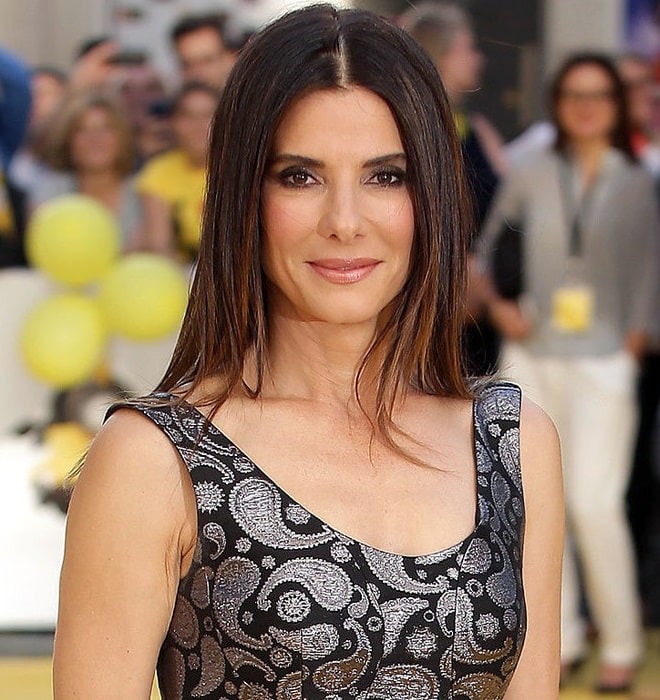 On the cover of the publication magazine “People” in 2015, Sandra’s photo appeared with the caption “real and shining”, because the star never abuses cosmetics, and tries to look natural even on the red carpet. Her unfading youth and toned figure cause delight and envy among millions of women.

However, do not assume that the favorite of millions remains forever young and beautiful. In order to look young and not lose her fans, the star decided on plastic surgery and cosmetic procedures. 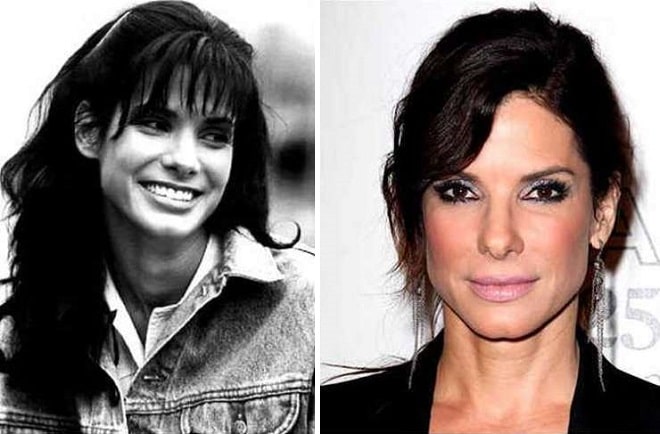 The experts suggest that the actress has a nose job. However, Sandra Bullock’s facial features have hardly changed after rhinoplasty. 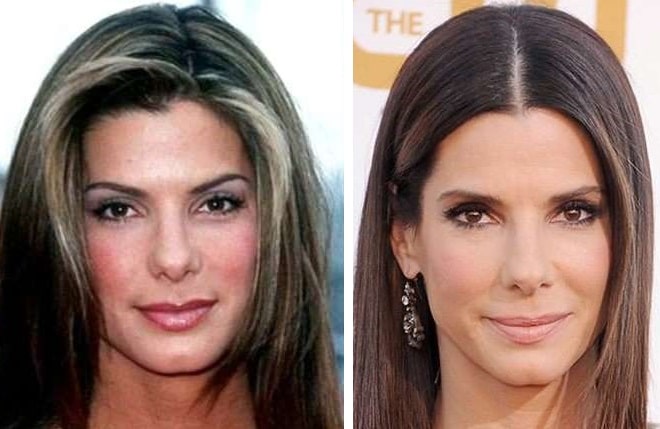 The press writes that to preserve her youth, Sandra Bullock had a facelift and botox injections. And also the star uses contouring with injections of fillers in the cheekbones, lips, and chin. 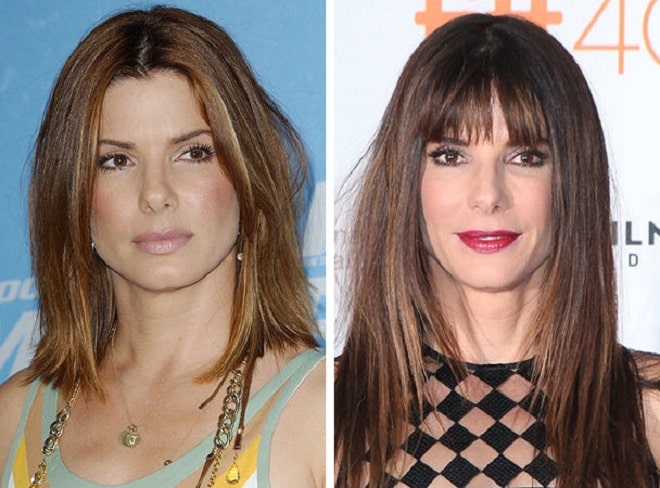 In Hollywood, Sandra is accused of a lack of facial expressions and a passion for fillers based on hyaluronic acid. The star refrains from comments and, contrary to all rumors, looks great.

In fact, Sandra is not at all a supporter of plastic surgery and cardinal cosmetic procedures.

“If you don’t like your body, do regular workouts,” — the star advises. “And I am completely satisfied with what I have.” 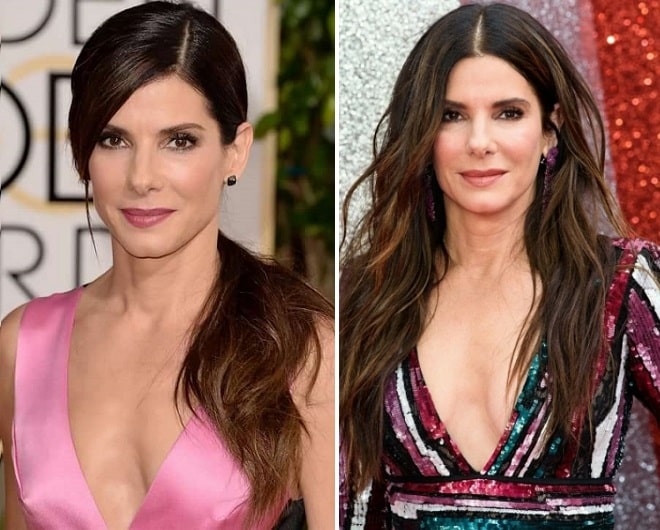 The actress sometimes jokes that she has undergone hundreds of liposuction operations and wants to do a breast augmentation!