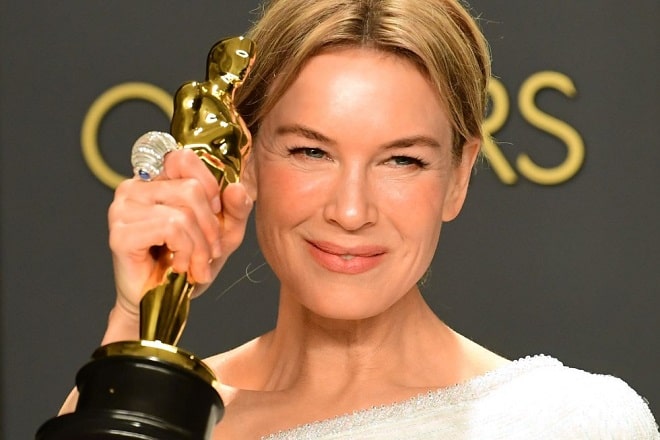 Renee Zellweger lost her natural charm after plastic surgery: her cheeks disappeared, the shape of her eyes changed, and even the shape of her chin changed. Bloggers, fans and journalists immediately passed an unflattering verdict – the actress has changed beyond recognition.

Awkward Bridget Jones became a symbol of the era. In the 2000s, the image of a 30-year-old loser, still hoping to meet a Prince and not losing her natural charm, found fans all over the world. And Renee Zellweger managed to embody it, who gained weight for the role. And although the actress then quickly lost weight through dieting and played in many serious films (for example, in “Chicago” and “Cold Mountain”), in the hearts of millions of fans, she will always remain not the ideal woman from” Bridget Jones’s Diary”: with extra pounds, narrowed eyes, plump cheeks and slightly pouted lips. 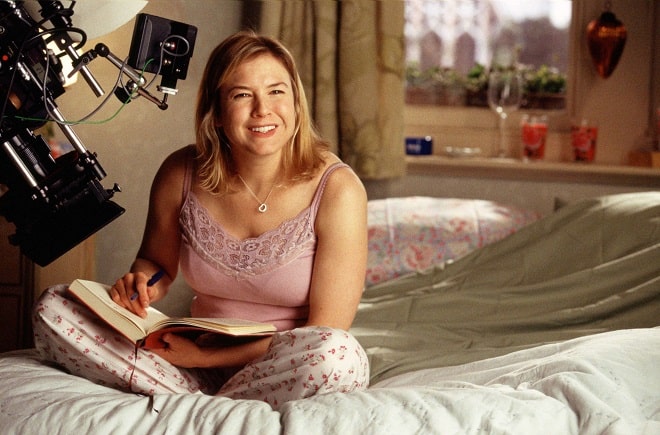 However, the latest social outings of the star prove that every year she is moving further away from her former image.

Fans were very surprised when a completely different Renee appeared in 2014. The press immediately began to find out what surgeries could lead to such drastic changes.

Several plastic surgeons analyzed the photographs of Renee Zellweger and concluded that the change in appearance was the result of age-related changes, weight loss, facelifts and visits to a beautician.

Apparently, blepharoplasty was performed. Lifting the eyelids changed the shape of the eyes and the look became more open and expressive. This operation greatly changed the face of the actress, the overhanging upper eyelids were her feature. 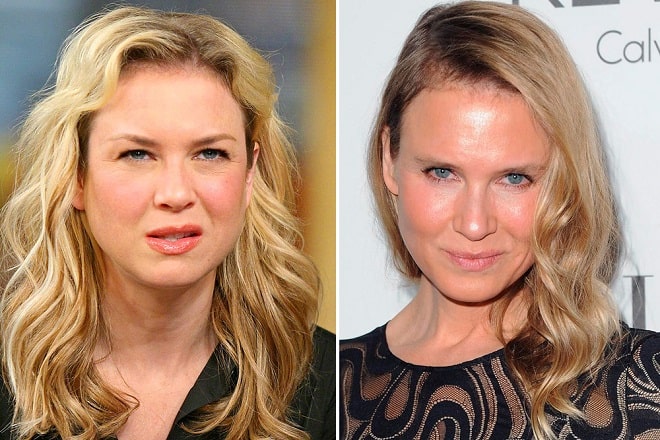 You can notice obvious changes in facial expressions, as well as in the shape and location of the eyebrows. Most likely, it’s because of the facelift. The perfectly smooth skin of the forehead indicates the use of Botox injections. Even if she laughs, her forehead motionless. 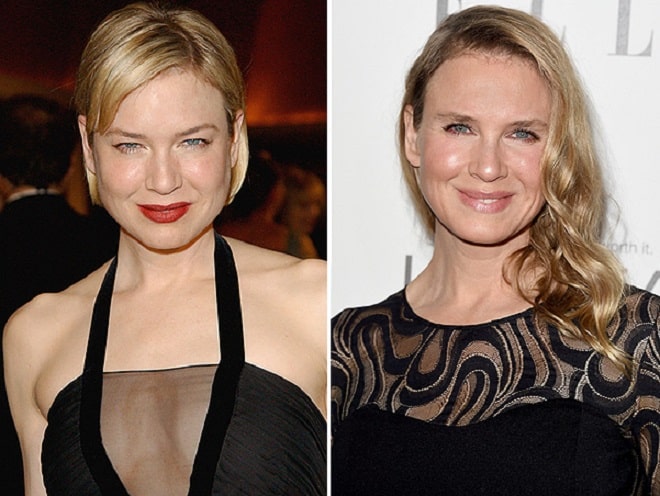 It can also be assumed that Renee injected lip filler injections to make them plumper. 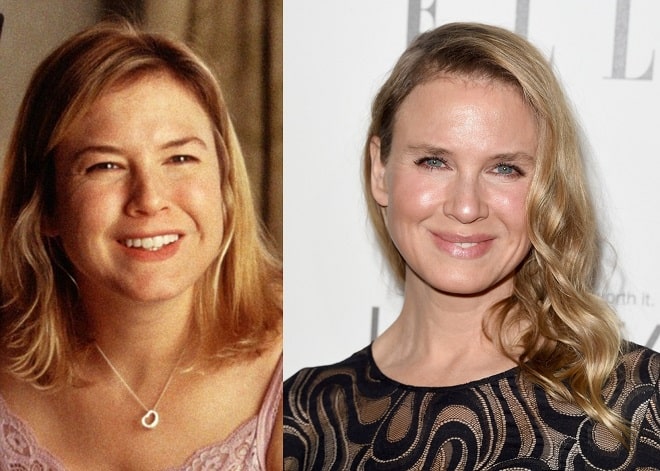 Cheekbones were probably corrected with fillers too. The oval of the actress’s face became clear and even – I think that there was contouring. 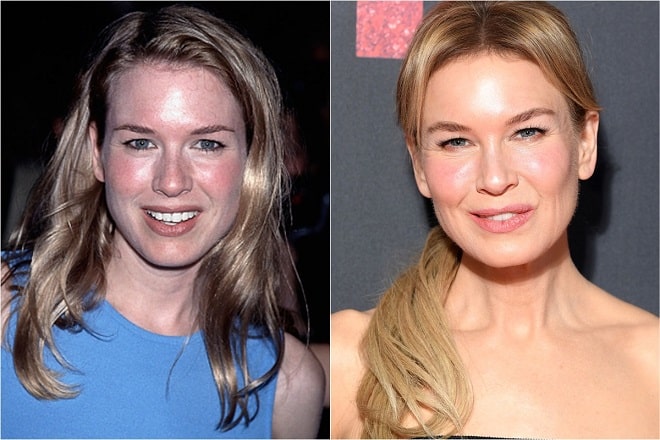 After losing weight, not only the roundness in the hips disappeared, but also the boobs. The star did not do breast augmentation, did not insert huge implants that would increase her tits by several sizes. She just corrected the shape with a push-up bra so that the breasts became more clear and expressive. 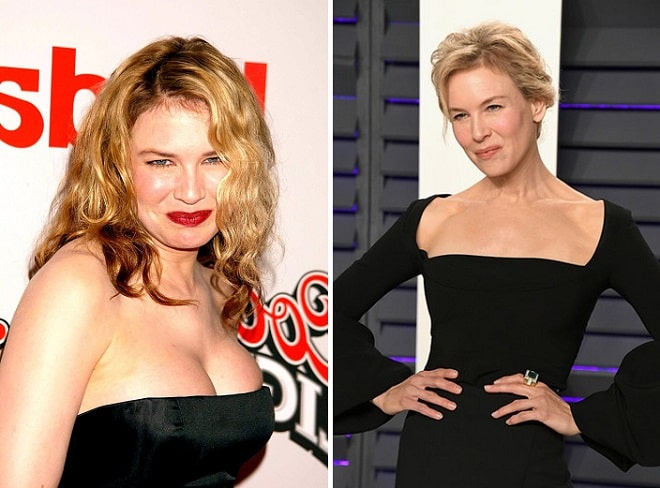 The nose didn’t change much during the whole time. In some photos, the bridge of the nose looks a little narrower, but this is probably due to makeup. Therefore, there is no reason to assume that there was rhinoplasty.

In General, I can say that Renee Zellweger looks amazing for her age.

Renee Zellweger herself says that the reasons for the changes in appearance are a happy life and a boyfriend-guitarist Doyle Bramhall.

The result of this ambiguous story is summed up by one of the editors of the British newspaper Guardian, which sees nothing strange: “There’s nothing wrong with the actress’s face. There’s something wrong with us.” After all, the star is just trying to meet the modern standards of beauty that society and the world of show business impose on her.

At the Academy Awards in February 2020, on Rene’s face, fans noticed traces of new plastic surgery.

That evening, the star received not only the coveted statuette but also a lot of compliments about losing weight. In a form-fitting dress, she showed off her perfect figure. However, at 50 years old, it is not so easy for her to lose weight. 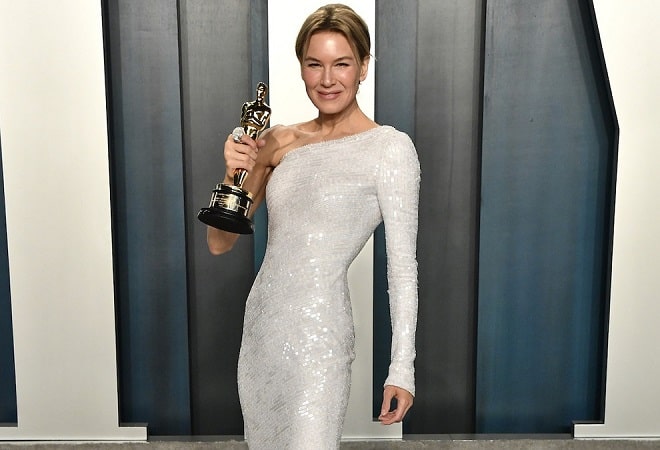 Many believe that the correction of appearance was beneficial, and today Renee shines in a toned body and with a young face. 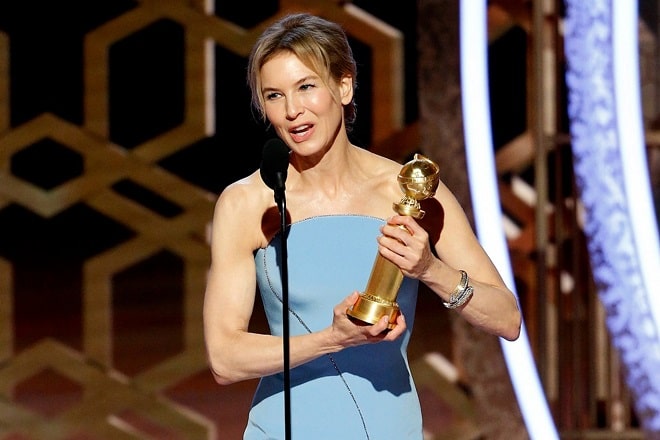