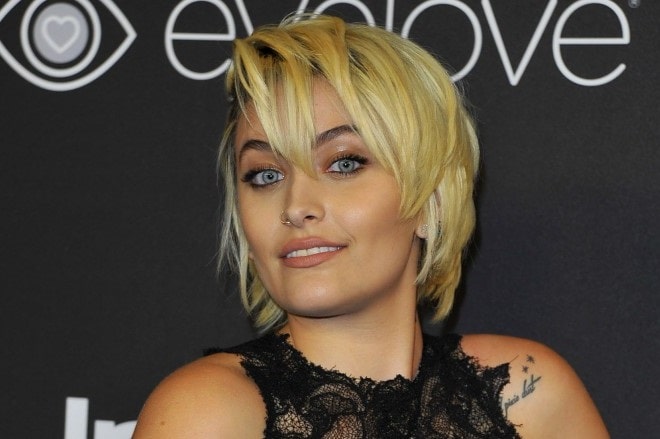 Paris Jackson, the daughter of the late pop king Michael Jackson, can be safely dubbed one of the brightest rising stars of show business – the girl is actively building a modeling career, simultaneously trying herself in the acting field.

Paris (born in 1998) is the daughter of the pop king who literally idolized her father, after whose death she tried several times to leave life after him. The girl, stunned by grief, hated the whole world, hated herself, and it is unknown how her future life would have turned out if at the age of 15 the girl had not been saved once again by psychologists. Gradually, she managed to get out of depression. 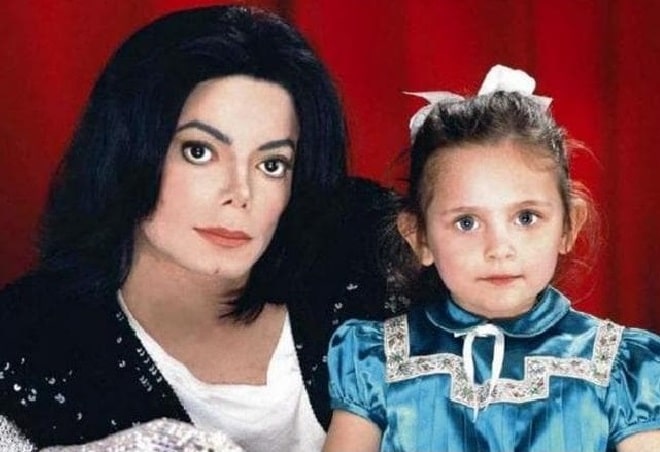 When Michael died, she and the boys were taken into custody by their grandmother, who tried her best to replace both mother and father for the children. But Paris started looking for her mother from the age of 13, then she only knew her name. 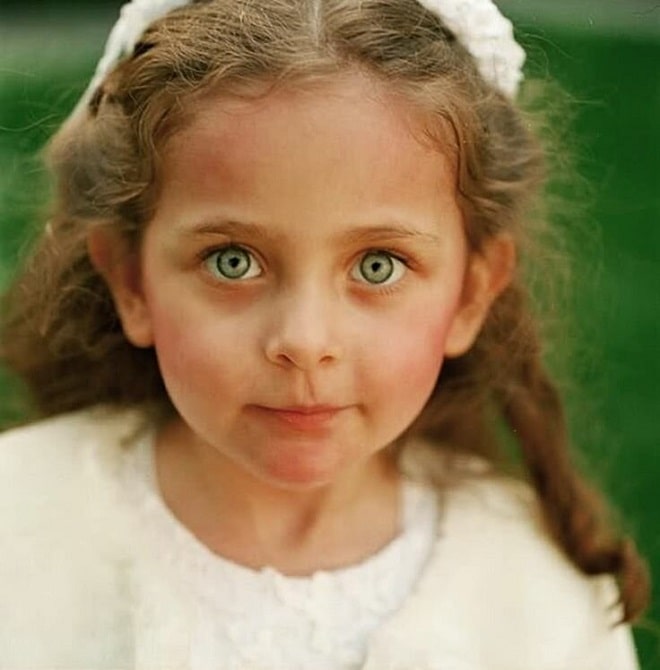 At the age of 13, Paris finally met her own mother. To date, they are incredibly close, and Paris is helping her mother in the fight against oncology. 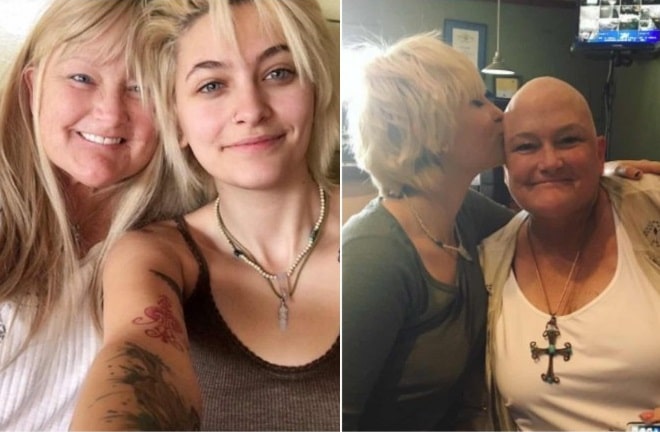 At a young age, the girl dreamed of a career as an actress. In May 2012, Paris was named the most beautiful teenager in the world by People Magazine. 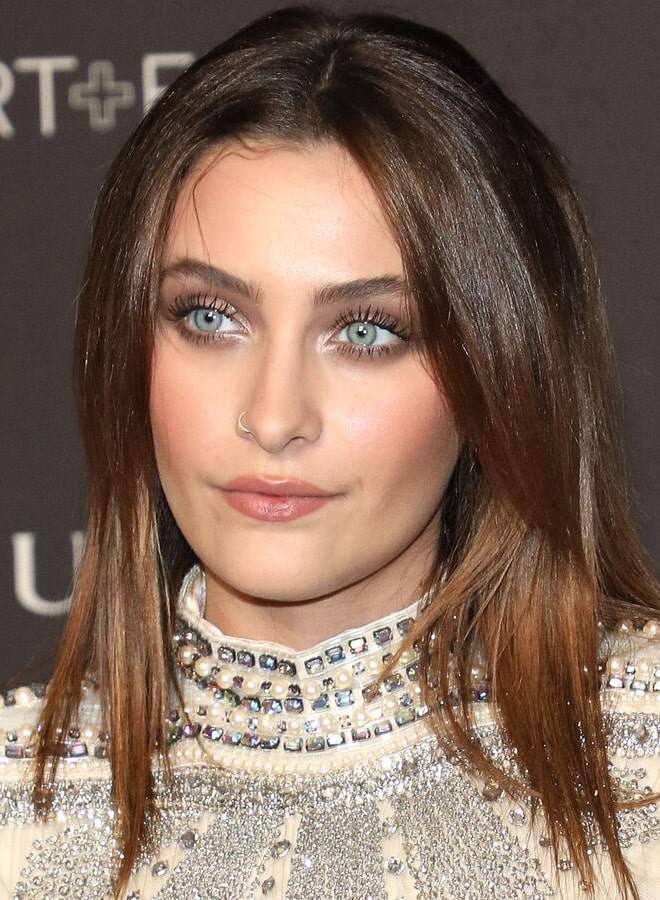 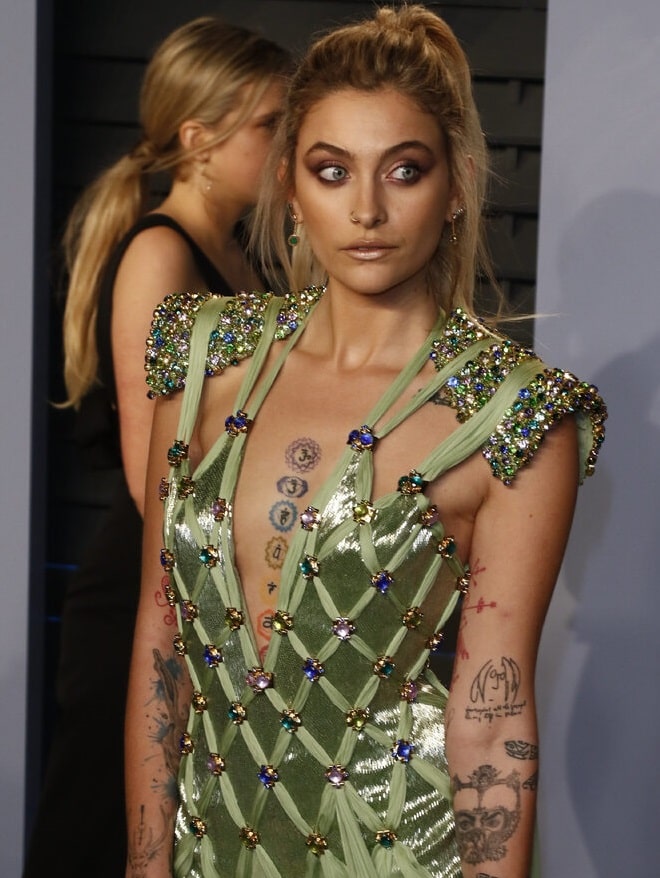 In addition, Paris debuted in the TV series “Star”, the action movie “Gringo”, starred in several music videos, including music videos. In 2018, the film “Dangerous Business” was released, in which Jackson made her full-length acting debut. And in June 2020, the daughter of a famous father presented the debut track Glorious.

Now Michael Jackson’s daughter is a real beauty, she is a successful model and actress. The girl often sees her brothers, they maintain good relations. In memory of her past happy life, Paris dreams of buying and restoring the Neverland estate, where once she and her brothers were truly happy with Dad. 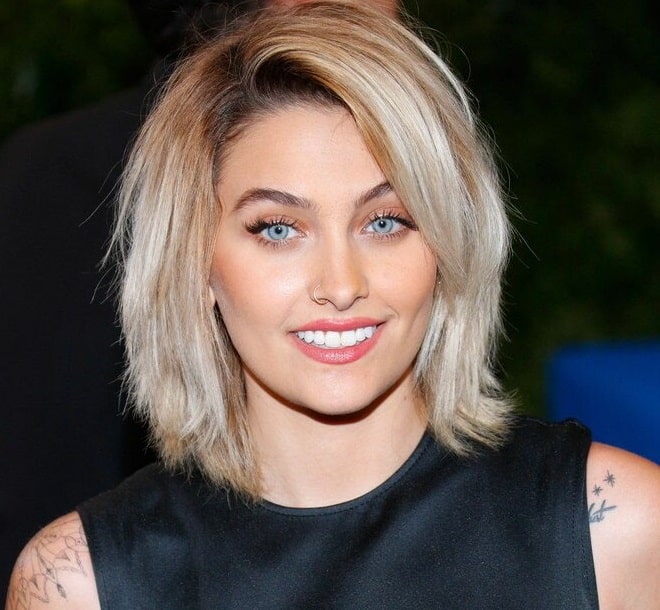 Did Paris Jackson have plastic surgery?

Most specialists in the field of aesthetic medicine believe that Paris Jackson’s beauty is absolutely natural. Nature created such perfect features for the face and body.

The Beauty Evolution of Paris Jackson

No less than the career successes of Paris, the media discuss her fashion transformation – today she pleases fans with sophisticated and feminine images, but not so long ago Jackson dressed like a real punk! 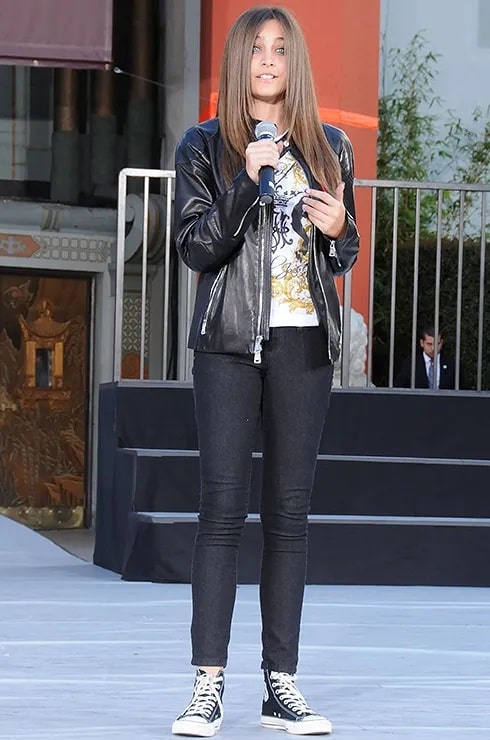 A very young Paris and the image of an ordinary teenage girl – there are no famous tattoos or experiments with hair yet. 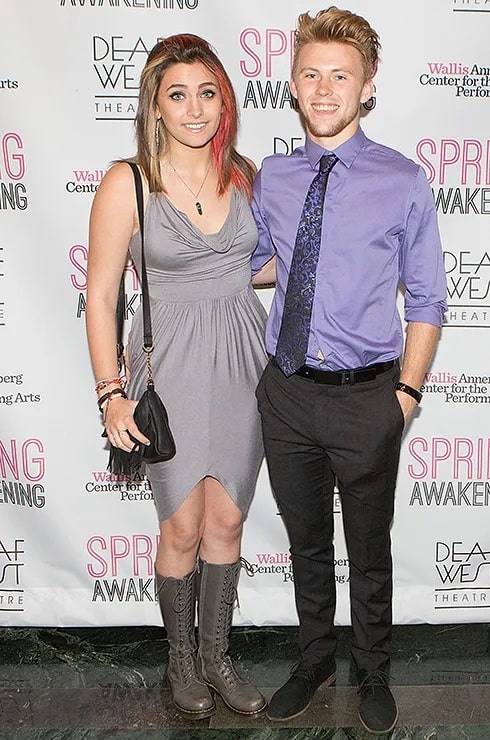 At some point, the daughter of the pop king got tired of the “cute” image and decided to try on “heavy” shoes, as well as change her hair color. 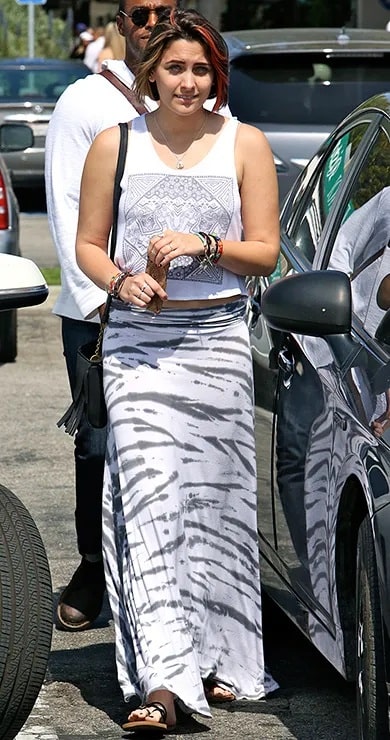 The next step towards changes in appearance is a short haircut, and Paris’ style meanwhile is more and more relaxed – fans sometimes reproach the girl for slovenliness. 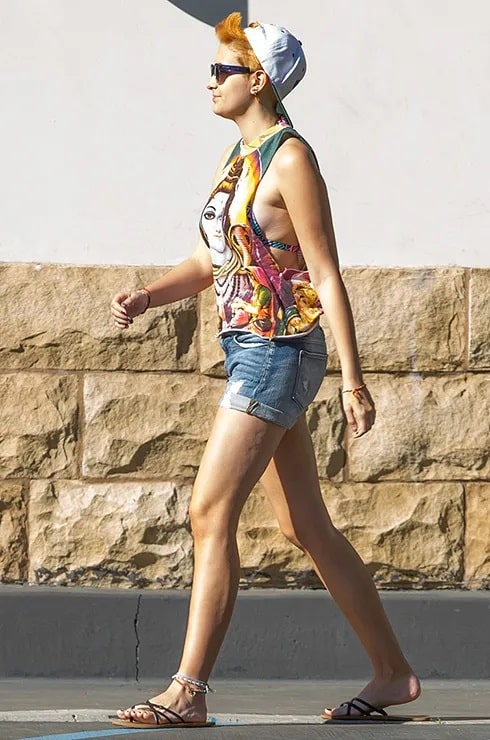 Orange “punk” hair, a baseball cap, denim shorts, and a stretched T-shirt — at some point Paris almost ceases to monitor her appearance. 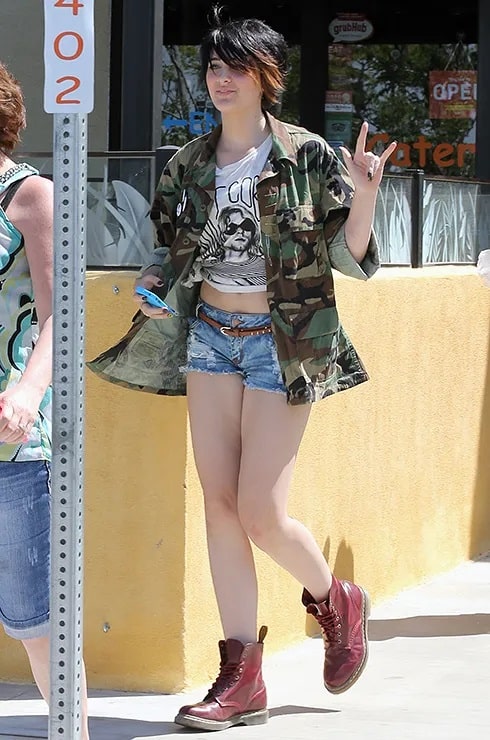 Increasingly radical coloring and deliberate carelessness in clothes – Paris later admits that at that moment she was experiencing severe depression.

Gradually, Jackson’s style begins to “level out” — she still loves “converse” and “martens”, plaid shirts, and numerous bracelets, but in general, the image of the young star becomes much more pleasant.

Despite the fact that the girl’s father was a legend of pop music, Paris herself is clearly closer to the grunge aesthetic — including in fashion matters. 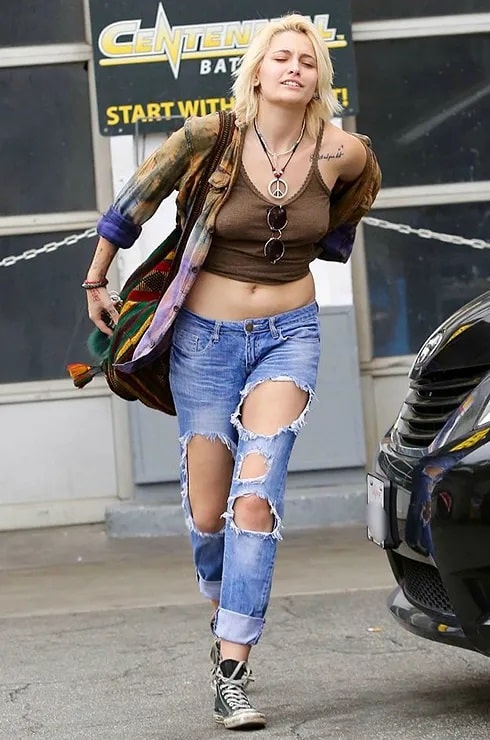 The grunge image of the model is “supported” by numerous tattoos, which the star managed to acquire in just a couple of years.

Jackson often appears in oversize things that emphasize her slender figure. However, sometimes fashionable laziness still overcomes the girl, and then she literally runs out of the house in the first clothes she comes across. 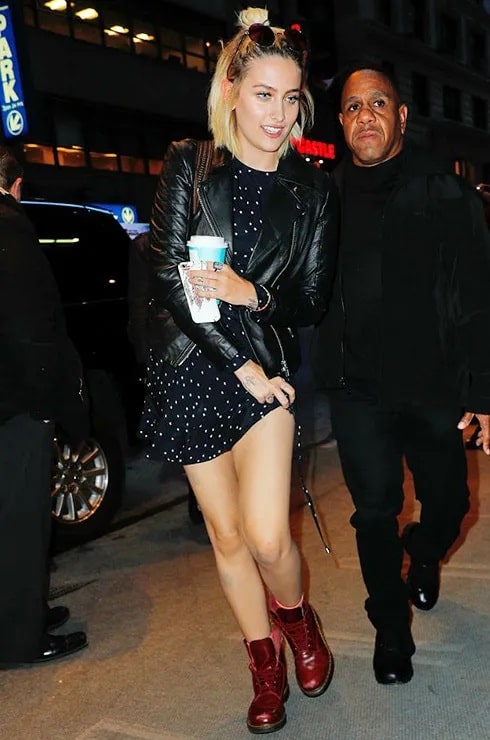 A leather jacket, a mini-dress and “martens — Paris looks very rock and roll. 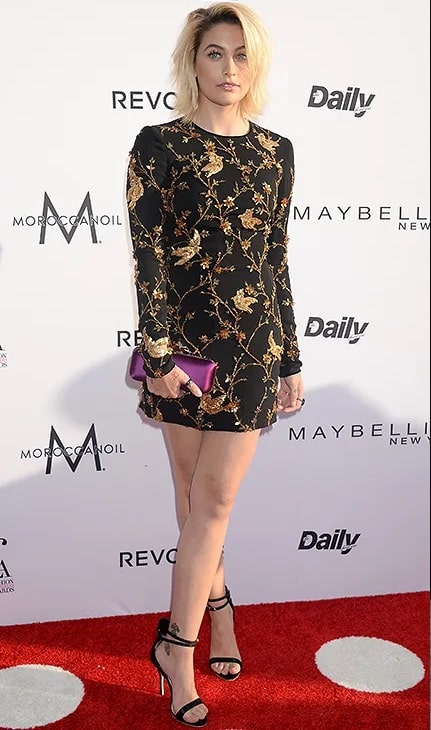 However, in general, it is impossible not to notice the changes in the style of the model, which are especially noticeable in Jackson’s social outings. 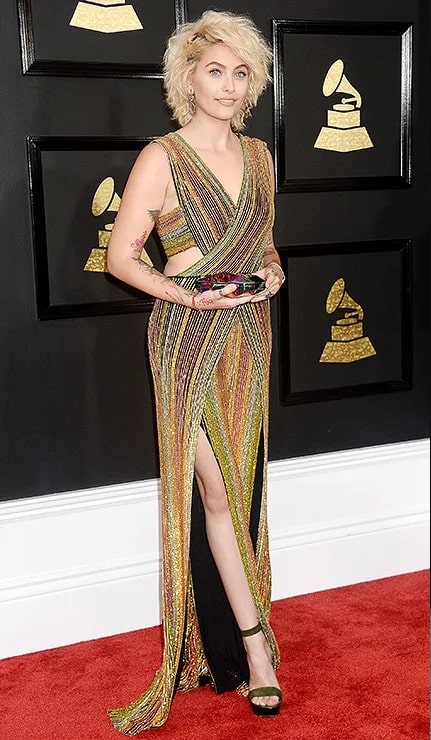 The bright appearance made Paris the muse of many famous designers who vied with each other to offer the girl their outfits. 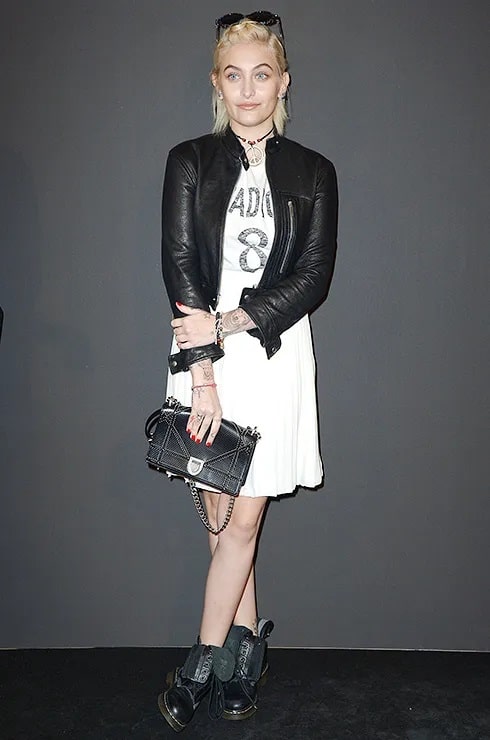 This style ​that most organically combines with Paris’ image. 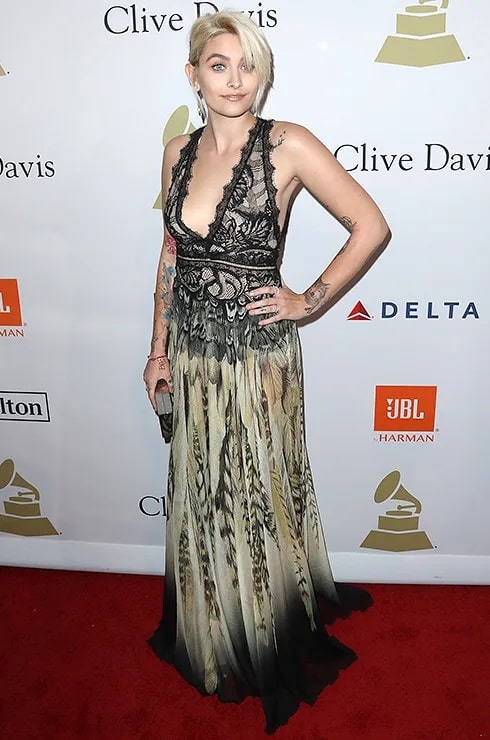 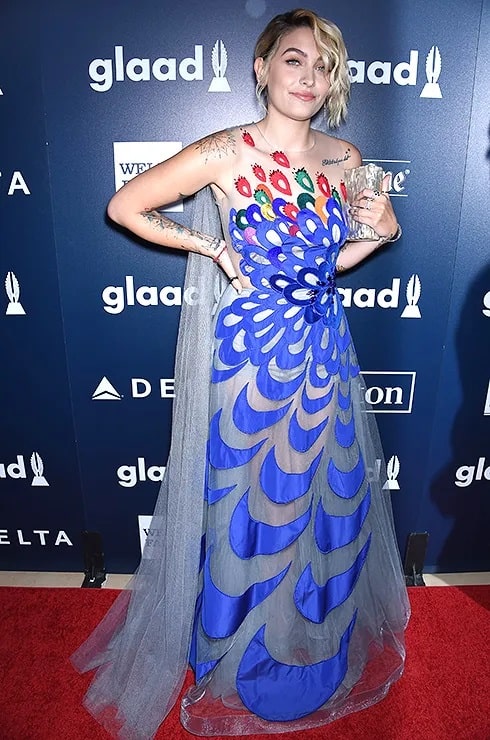 … and this motley outfit too. 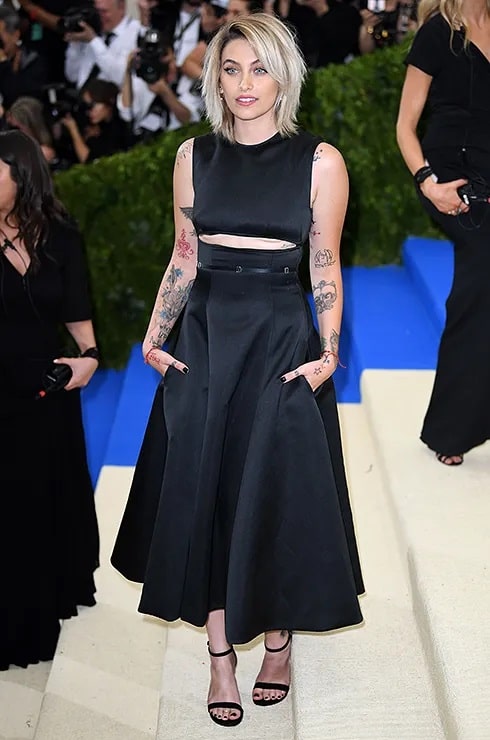 But the laconic and strict image of Jackson at the Costume Institute Ball caused only positive reviews both among fashion experts and in the camp of the star’s fans. 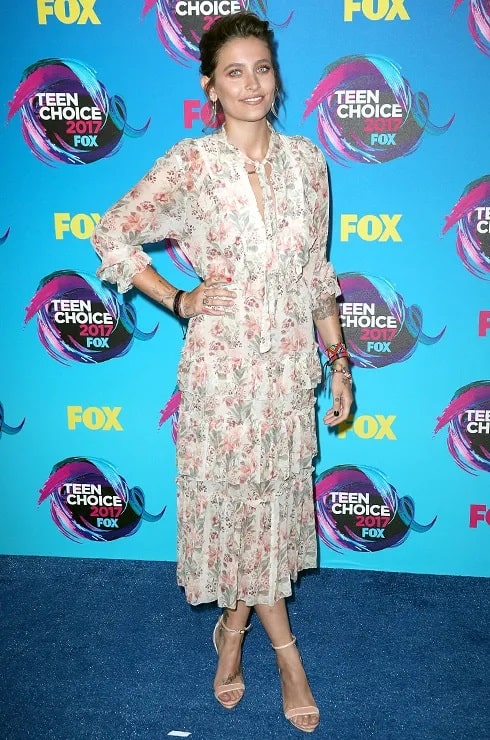 The most “delicate” outfit of Paris, which unexpectedly chose an emphatically feminine dress!