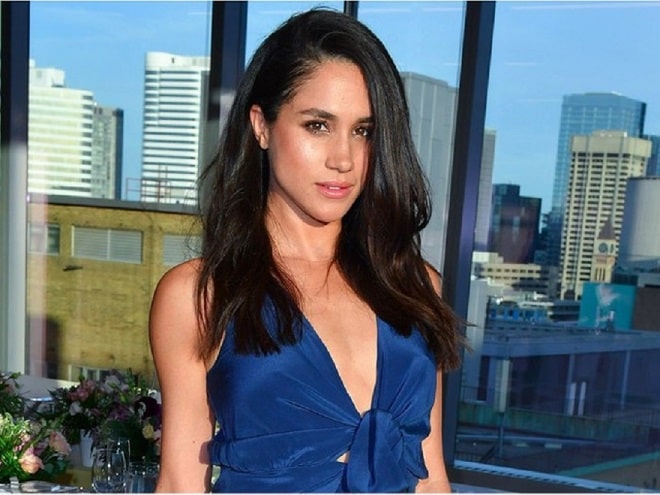 Millions of girls dream of marrying a prince, joining the royal family, and living in a palace. But not Meghan Markle! She was not afraid to resign as a duchess and chose to be herself. We talk about how her appearance changed depending on life circumstances.

Who is Meghan Markle?

“I never wanted to be the ‘lady who goes to lunch’. I’ve always wanted to be a woman who works,” Meghan Markle wrote on her blog.

A graduate of the Catholic College for girls did not dream of the status of a duchess and followed in the footsteps of his father on television. In 2002, the name of Meghan Markle, a 21-year-old native of Los Angeles, flashed in the credits of the top series “General Hospital” and then “CSI: NY”.

At the dawn of her career, Meghan Markle followed the fashion of the 2000s on the abundance of bronzers, thin eyebrows, and false hair.

She starred in the game show “Deal or not?” and changed her appearance at the request of the writers. Short dresses, a lot of makeup, and fake strands were on the set.

Achieved worldwide popularity because of the relationship with Prince Harry Meghan Markle does not like to remember this period, but perhaps it was he who became the impetus for the peak of fame.

Appearance, inherited by Meghan Markle from the mother of African American and white father, came to the liking of the Directors of the series “Suits” and the actress got the lead role.

With this moment happening the beauty-evolution of Meghan Markle.

Fame demanded perfection from the actress, perfection in everything, and she went on about Hollywood. 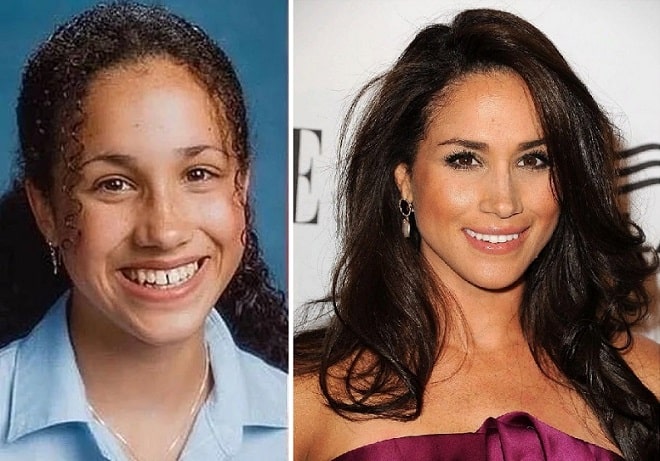 Meghan Markle installed veneers to make her teeth look perfect. Now she is the owner of a snow-white smile.

Another detail that did not escape the journalists is the changed shape of the nose and lips.

The press started talking about rhinoplasty Meghan Markle, and the long absence of the star in public fueled rumors.

American plastic surgeons analyzed photos of Meghan Markle before and after the nose job and came to the conclusion that, most likely, the actress corrected the nostrils, narrowed the bridge of the nose and the tip of the nose. 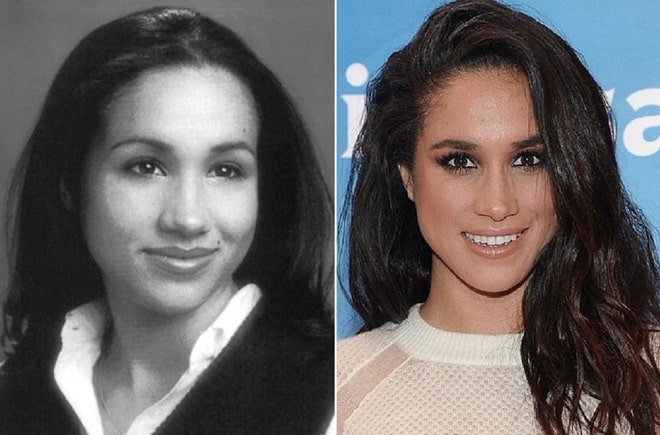 In joint photos of Meghan Markle and Prince Harry, experts note the changed volume of the lips and associate sensual swelling with injections of hyaluronic acid. 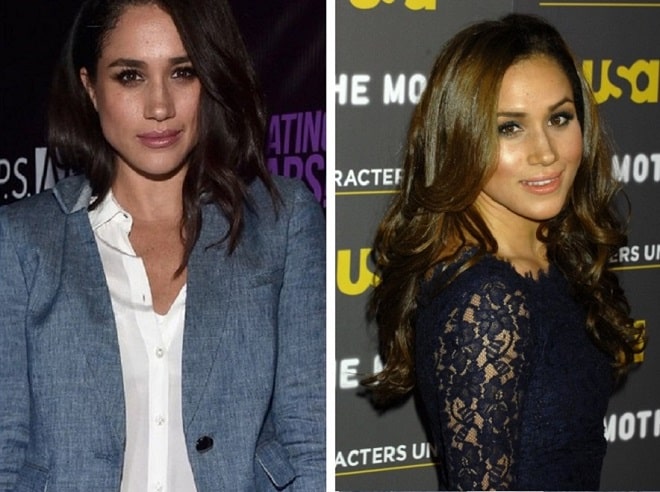 Stepping over the threshold of the 30th anniversary, the actress changed her attitude to freckles. Fervent pigment spots on the cheeks and nose of Meghan Markle almost disappeared due to the efforts of makeup artists.

Already an experienced actress goes to the red carpet with a chic styling, smooth tone of the face, and highlighted eyes.

In 2016, Meghan Markle struck up a relationship with the Royal person and transformed the appearance to the monarch’s heights. Now her hair is cast with glitter, the tone of the face is always perfect and the nose is even narrower.

Fans looking at photos of Meghan Markle 2016, do not exclude the possibility of re-rhinoplasty. Actress such suspicions are not commented on.

The secret of the royal smile

The young Meghan Markle had a charming smile. However, the girl obviously decided that with charm alone she would not achieve much success, let alone marry a prince. 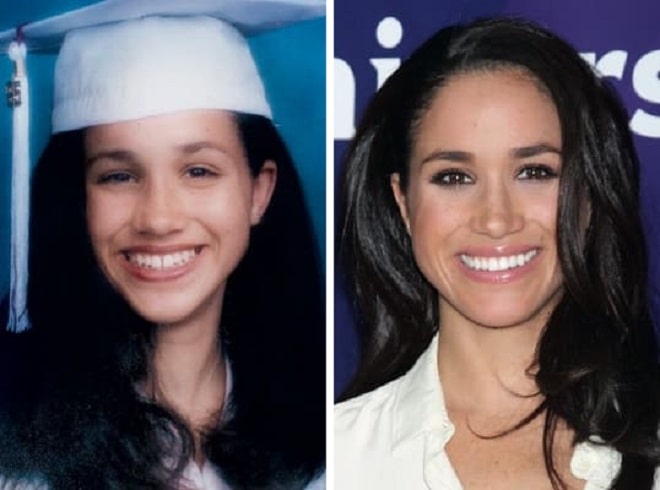 Judging by the photos in her youth, Megan was not super-beauty. Moreover, her smile had a clear flaw: a well—marked gap between the teeth in the front row. And the color of the tooth enamel left much to be desired. For the development of an acting career, this was unacceptable, so Meghan Markle probably first resorted to braces and did teeth whitening.

It is likely that the effect of the conducted whitening and orthodontic treatment did not satisfy the girl, although the teeth became smoother and lighter by a couple of tones. Therefore, all the following years she worked tirelessly on her appearance and especially her smile. By the time she met Prince Harry, Meghan already had ceramic veneers on her teeth, which were made superbly. There was no trace of the notorious ugly gap between the teeth, and the teeth became whiter and larger — everything is as it should be for a Hollywood smile.

It is unlikely that the beauty transformations of Meghan Markle would have caused a stormy debate, if not for the relationship with an eligible bachelor on the planet with Prince Harry. Megan is an extraordinary person, but her charity work, literary talent, and the struggle for gender equality are less interesting to society than her personal life.

Meghan Markle and Prince Harry began an affair in early summer 2016, and in August they were declassified by the paparazzi. Fans of the Prince predicted the rapid collapse of the union, but wrong.

The seriousness of Harry’s intentions proved a quick acquaintance of the actress with the Royal family, but Elizabeth II reacted negatively to the new passion of her grandson. According to press reports, the Queen’s subordinates collected a whole dossier on Markle and her family. 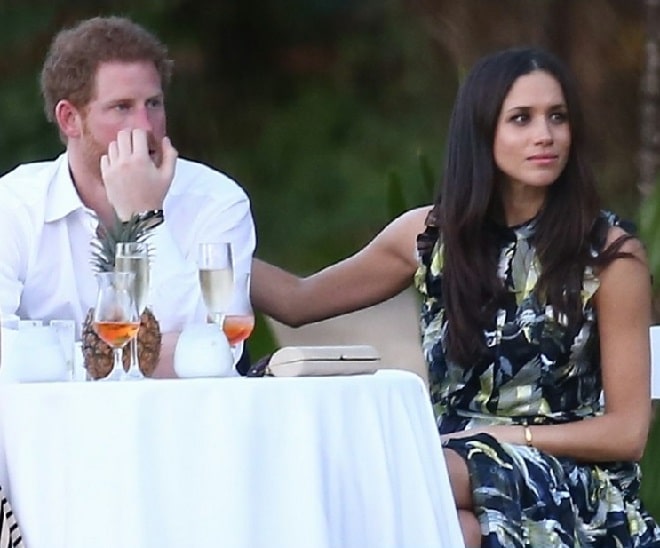 And yet the actress managed to maintain a reputation and even reassured the negatively tuned grandmother. Megan learned the rules of British etiquette, closed her own blog, and refused advertising projects. However, to settle the conflict with the stepmother of Prince Duchess Camilla the star has not yet been able to. Camilla Parker-Bowles is outraged by the choice of a stepson, believing that Markle builds a career on the publicity of the Prince.

In turn, Prince Harry does not pay attention to the opinion of his stepmother and makes sensational statements about readiness for fatherhood. 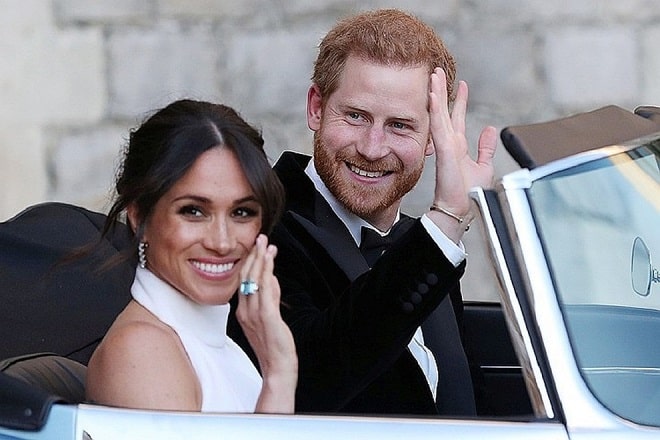 When Megan was in the status of a popular actress, her experiments with appearance did not bother many people. However, as soon as she went down the aisle with the prince, everyone immediately rushed to study her youthful photos and look for what has changed since then.

According to experts, the wife of Prince Harry corrected the shape of the nose and narrowed the nostrils, and also changed the shape of the upper lip. Most likely, she did it not with the help of injections, but thanks to lip surgery. Journalists even call the estimated time of work on the appearance-2011. Then Markle disappeared from sight and tried not to appear in public.

In addition, the profession obliged the girl to experiment with the image: she changed the style of clothing, the thickness, and shape of the eyebrows, hair color, and styling.

However, after joining the Windsor family, Meghan’s style became more restrained and elegant. She preferred pale makeup, laconic hairstyles combined with hats, and fitted dresses. The actress even refused to have a golden tan, and cute freckles disappeared from her face. Perhaps such recommendations were given to her by court cosmetologists to protect her from age-related pigmentation. 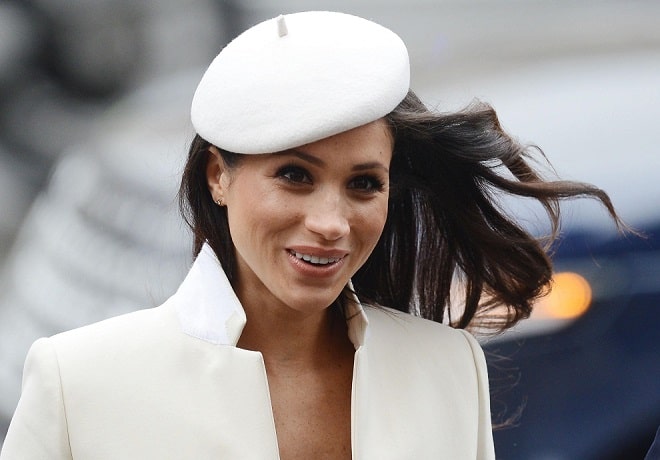 The birth of the first child

The Duchess of Sussex gave birth to a son in April 2019, at that time she was 37 years old. Throughout her pregnancy, she was closely watched by the paparazzi. Rumors were very different: from the opinion that a surrogate mother was carrying her child, to predictions that Megan would have twins. The fact is that the prince’s wife had an unnaturally large stomach, while she walked in high heels until the 9th month and easily squatted down. Interestingly, even while waiting for her son, Megan adhered to a vegetarian diet, which she has been a fan of for a long time.

However, after Markle went to the press after giving birth, the doubts were dispelled. The beauty had all the signs that ordinary young mothers have: puffiness, a swollen stomach, and pigmentation. The prince’s wife has greatly recovered and did not try to hide it. 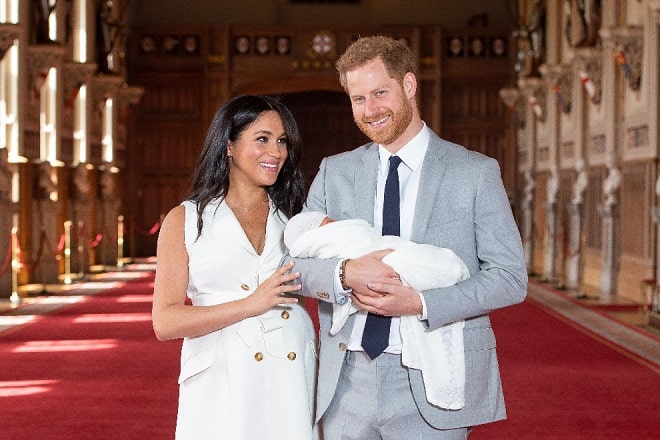 Megan did not rush to lose weight rapidly. She did Pilates and yoga for recovery, but not for the purpose of losing weight. For at least six months, the figure was hidden by voluminous outfits. In an interview, Prince Harry said that his wife wants to serve as an example for other mothers and demonstrates that it is not easy to get rid of the weight gained during pregnancy. 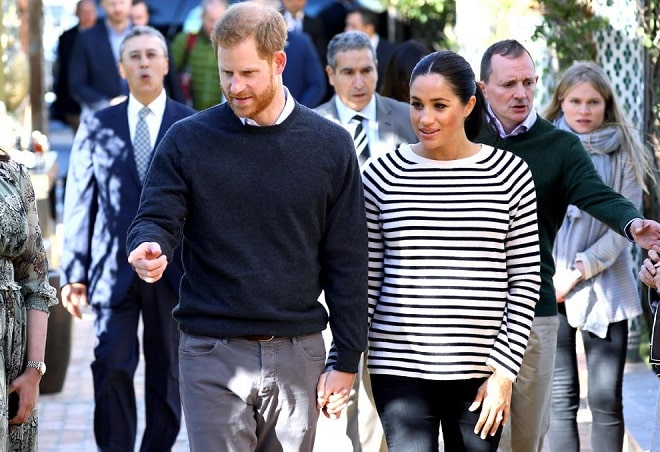 At the beginning of 2020, it became known that Meghan and Harry resigned as members of the royal family and renounced their rights to the throne. They decided to become financially independent and do business without regard to the opinion of Elizabeth II. 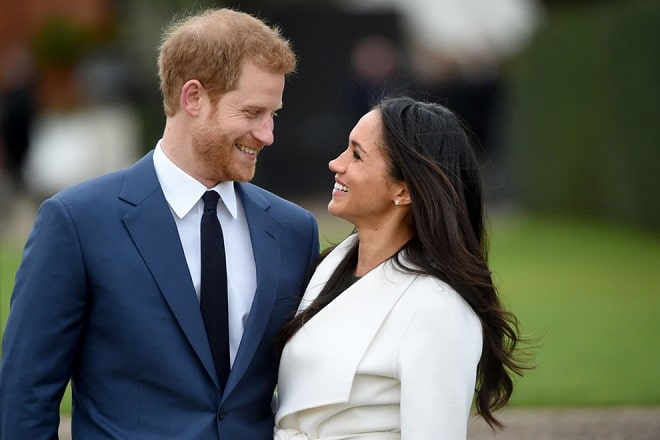 This decision influenced Megan’s style, it became freer again. She is not afraid to wear bold combinations of things and say in interviews what she really thinks. By the way, the figure of the actress looks perfect again. It is possible that soon it will appear again on the screens. 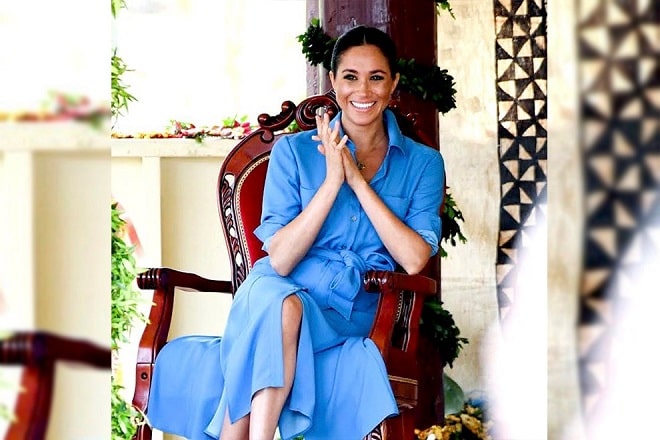 Meghan and Harry founded a company that will produce films, they signed a contract with Netflix and do not regret a bit about their desire to leave the royal palace.

On June 4, 2021, Meghan Markle and her husband, British Prince Harry, became parents for the second time.

How does Meghan Markle lose weight after the second birth?

For several months she practically did not appear in public, trying to spend time with the newborn baby. However, gradually the secular lifestyle resumed and the paparazzi noted that this time Markle got into shape much faster after giving birth.

The prince’s wife has always noted that she is not a supporter of strict dietary restrictions and grueling workouts, especially during lactation. In her opinion, the changes that occur with the body due to pregnancy are quite normal.

In many ways, this is why Megan was in no hurry to appear in public either after the first or after the second birth. She gives herself time to rest and relax, and only after that begin to get in shape.

After the birth of Archie’s first child, she did not hesitate to appear at royal receptions with a significant weight gain. And now her usual diet and physical activity have just become more orderly. It turned out that this was enough to quickly restore the figure.

Megan calls her diet “flexible”. She is based on the principles of the Mediterranean diet and includes a large number of vegetables, herbs, seafood, and healthy fats.

Meghan Markle’s morning, like many other beauties, begins with a glass of warm water with lemon — it helps to awaken the body and turn on the gastrointestinal tract.

She has breakfast with oatmeal on almond milk with the addition of agave syrup or an omelet with cheese and herbs, and sometimes she allows herself toast with peanut butter — a favorite treat from childhood.

The morning meal is the most satisfying.

Megan tries not to eat meat, so she mostly prefers fish or light soups for lunch. But if she wants a steak, she does not deny herself.

But dinner should definitely be light. Most often it is seafood and green salads, at least 3 hours before bedtime.

Megan takes the same relaxed approach to sports. No heavy training with iron or grueling cardio. Instead of them – yoga and Pilates, but almost every day.

Megan just loves these types of workouts so she does not get tired of them, but on the contrary, she is energized for the whole day. In addition, walks and games with children help to keep the body in good shape, according to her.

Sculpting manual or hardware massages help her get in shape, which not only gets rid of excess volumes but also tightens the skin.

5 thoughts on “Meghan Markle, Before and After”