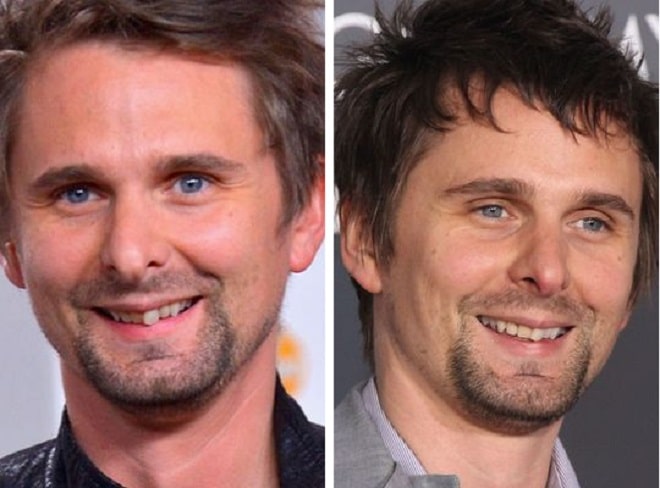 Matthew’s smile was far from ideal. However, he decided to fix his teeth after meeting Kate Hudson. After orthodontic treatment with braces, Bellamy’s smile looks, though not Hollywood, but very attractive.

Like many Englishmen, Matthew Bellamy’s smile was far from ideal. However, the future rock star was not at all embarrassed by the uneven dentition and protruding incisor. He devoted all his free time to music and eventually, together with his band, achieved such popularity that his smile became a peculiar feature. Many fans agreed that an outstanding front tooth even gives the musician a special charm.

What was the surprise of the band’s fans when Matthew Bellamy appeared in front of the public with even teeth. After starting an affair with Hollywood star Kate Hudson, the Muse soloist realized that changes in his image were inevitable and agreed to put braces on. There were rumors that Kate Hudson herself insisted on correcting Matthew’s bite. Of course, braces on teeth are still not very well suited to the image of a rock star, but, anyway, now Bellamy’s smile looks, though not Hollywood, but very attractive.