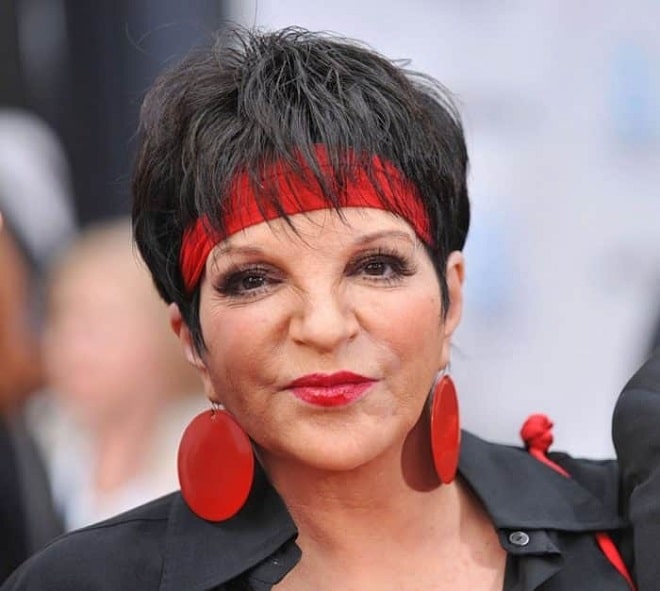 Liza Minnelli is a true legend of American cinema. A whole era in Hollywood is connected with her name. Bright roles, stormy novels and numerous awards of American film forums – that’s what the life and fate of this inimitable actress consisted of. Did Liza Minnelli have plastic surgery? How did she look in her youth and how has her appearance changed now?

Liza Minnelli was born on March 12, 1946. Lisa, the daughter of Hollywood star Judy Garland and successful director Vincent Minnelli, had everything that other girls can only dream of. In their huge Hollywood house, magnificent children’s parties were often held, where the children of other celebrities were invited. Her father took Lisa to where thousands of talented actors would like to go — the baby played among the scenery in the shooting pavilions of the Metro-Goldwyn-Mayer studio. And when Mom gave concerts, Lisa sometimes ran out on stage to dance next to her in the spotlight. The audience was touched. Of course, she never saw any other fate for herself, except to become an actress. Lisa got her first role at the age of three.

Lisa’s magical childhood ended when her parents separated. Lisa was only four years old at the time. It turned out that her mother is one of those women who never grow up. Judy Garland led the life of a bohemian beauty: endless parties, lots of fans. She married several more times. She gave birth to a son and a daughter, whose care later fell on the shoulders of the growing Lisa. Terrible depressions due to the “failed life” Judy Garland suppressed drugs. And she periodically told the children that she was going to commit suicide.

Is it any wonder that, barely reaching the age of fifteen, Lisa decided to leave home and enroll in a theater school in New York? Judy was against it and refused her daughter financial support. Lisa left anyway with only a hundred dollars in her pocket. She worked part-time as a model and was very surprised when she was invited to act, because she never considered herself beautiful.

The beginning of Minnelli’s career was overshadowed by constant comparisons with the famous mother. “Lisa is just a copy of mom,” critics wrote, and the young singer was terribly upset. They really were very similar. Lisa had a warm relationship with her mother, but Minnelli did not want to look like this hysterical person at all. One day Lisa was invited to perform with Judy at the London Palladium. During the performance, Garland, who was still waiting for the emotion of “Oh, how the baby looks like her mother,” suddenly discovered that her daughter was performing no less brightly and talented than herself. And the audience clearly liked Lisa more! Judy couldn’t hide her emotions. 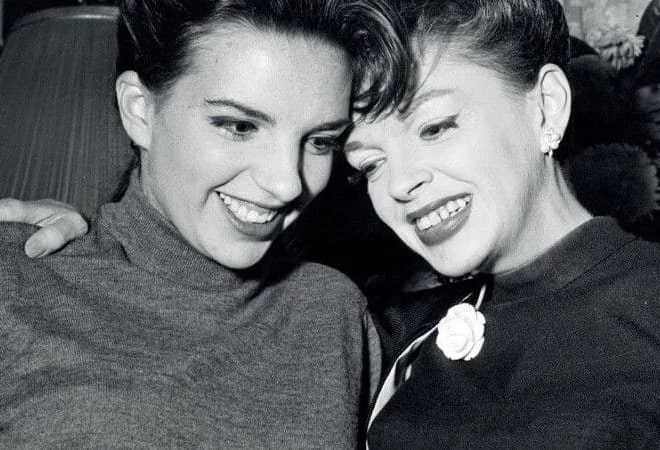 “I was on stage with my mom, but suddenly she stopped being my mom… She became Judy Garland.” — Lisa later recalled.

According to critics, Lisa looked incomparably brighter: more beautiful, more artistic, more ringing. Judy Garland had noticeably faded by then, not least because of alcohol and drugs. Two concerts in London were the sunset of one and the ascent of another star. It was from that moment that a cat ran between the two women.

In March 1967, Lisa married singer and composer Peter Allen, a friend of her mother. It was rumored that Alain was gay and that he spent his wedding night with one of his friends. This far from idyllic marriage lasted seven years. 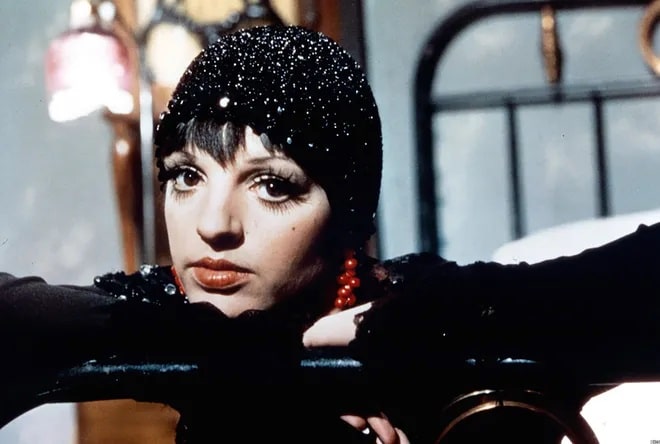 Bob Foss’s film “Cabaret” was released in 1971 and became the main one in Lisa’s career. She carefully thought out her image. For example, she did all her hairstyles on her own.

“I am convinced that many actresses cannot break through just because they do not know how to present themselves. Maybe sometimes you need a little plastic surgery, and sometimes it’s just enough to change your makeup to look completely different. As for me, I have no doubt that it was a short haircut that was crucial for my career. And in general, I believe that a woman can use any means to feel confident in her own body,” — said Minnelli. 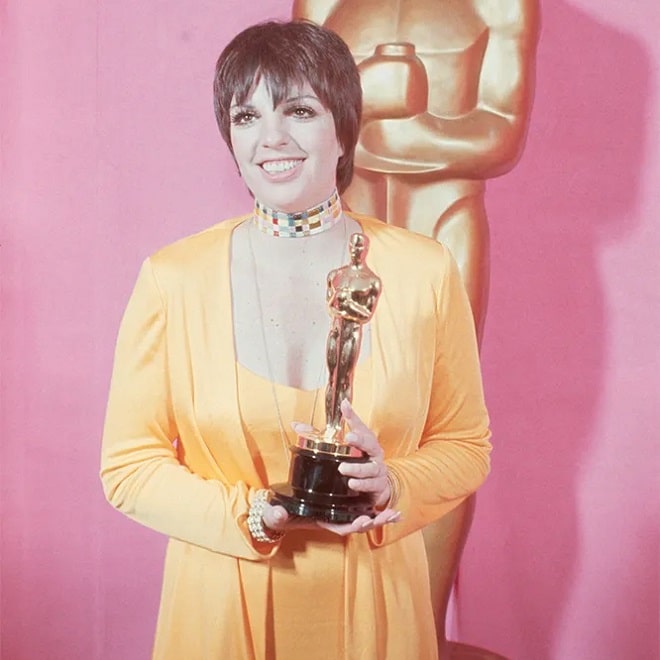 The image of a fragile, detached from reality and eager for love dancer brought her the adoration of the whole world. Minnelli has collected a whole crop of awards: an Oscar, a Golden Globe Award in the USA, a British Academy Award, two Italian top film awards – the David di Donatello Award and the Valentino Award. The soundtrack to the film, fully voiced by Lisa, found a lot of fans and sold half a million copies. 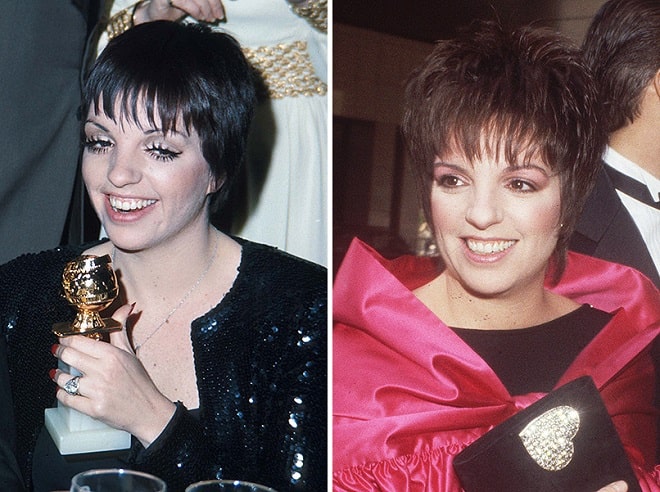 Her career was just beginning. Lisa’s lovers and husbands replaced each other, and the press dubbed her a “sexy shark”. Her second husband was Jack Haley, and her third husband was Mark Gero.

Minnelli was very afraid to repeat her mother’s fate, but she could not do anything: none of her infatuations turned into a strong marriage for life. The singer tried to get pregnant several times, but nothing worked. She had at least three miscarriages. Subsequently, she gave up trying to have a child because her health problems became too serious. Out of desperation, she drank, used drugs and regularly got into drug treatment clinics… 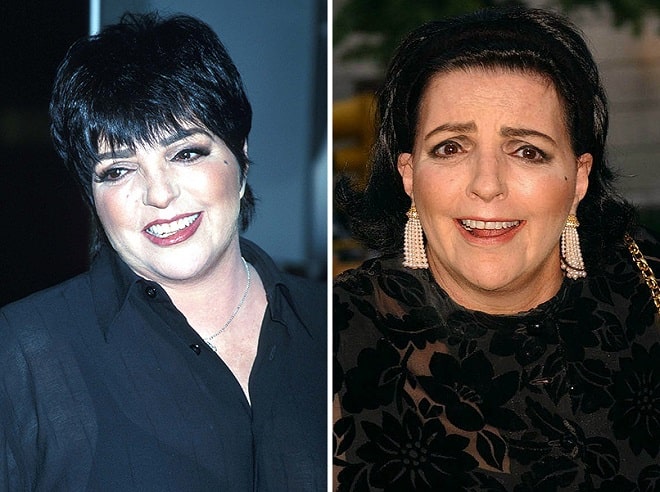 “The role of a woman standing on the edge of the abyss is already behind me. I hope forever. But, although I do not drink, do not abuse medications, do not spend nights in noisy companies and sleep eight hours a day, I am still afraid of relapse,” Lisa said when she turned forty. She had just completed another course of treatment at a drug treatment clinic. 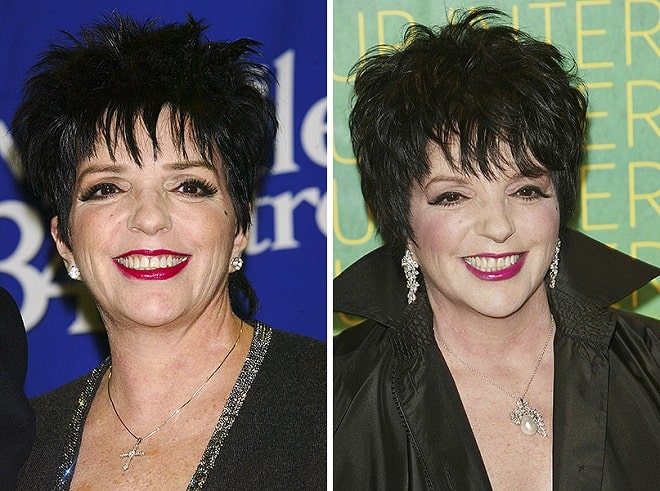 The fourth marriage broke all the scandalous records previously set by Minnelli. In March 2002, she married concert producer David Guest, a childhood friend of Michael Jackson. Together with the singer, Gest became addicted to plastic surgery back in the 80s. He did facelifts, several blepharoplasty and rhinoplasty surgeries.

The couple lasted together for a year and a half, until July 2003, after which, during the divorce, sensations surfaced one after another. Guest claimed that Lisa regularly beat him badly and now has to pay him moral damages. Minnelli did not remain in debt: according to her, her ex-husband stole two million dollars from her, is on drugs and generally tried to poison her. 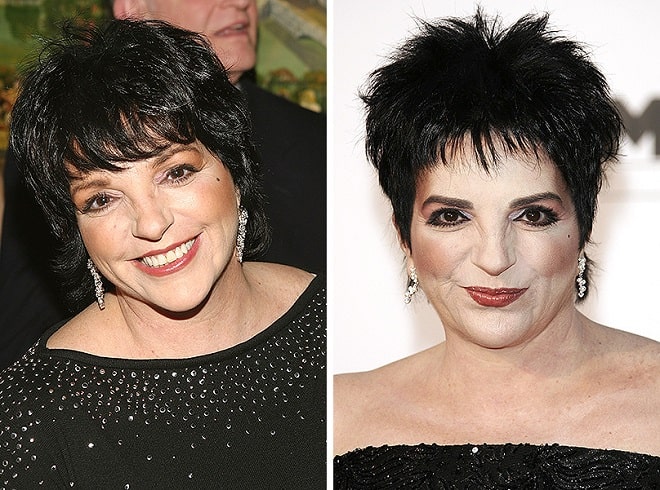 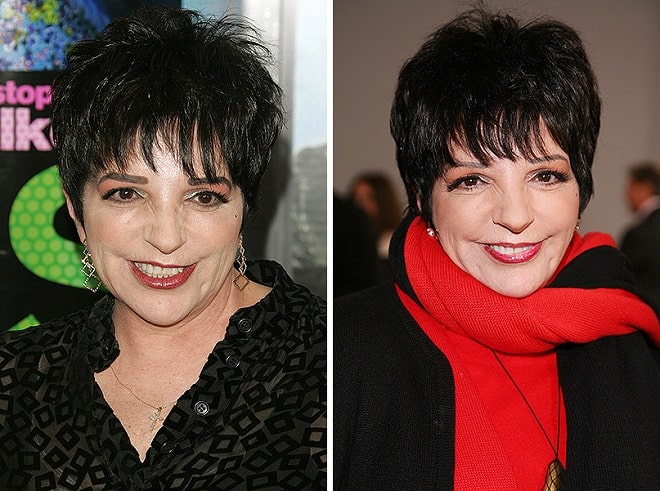 The trial with Gest dragged on until January 2007. The parties have finally come to an agreement that they are separating amicably, without payments and compensations. Then Lisa has moved away from her worries a little and has blossomed. She was rumored to have had a facelift in early 2008. For some time now, the singer constantly looks slightly surprised because of the raised eyebrows: it seems that the surgeon overdid it a little. 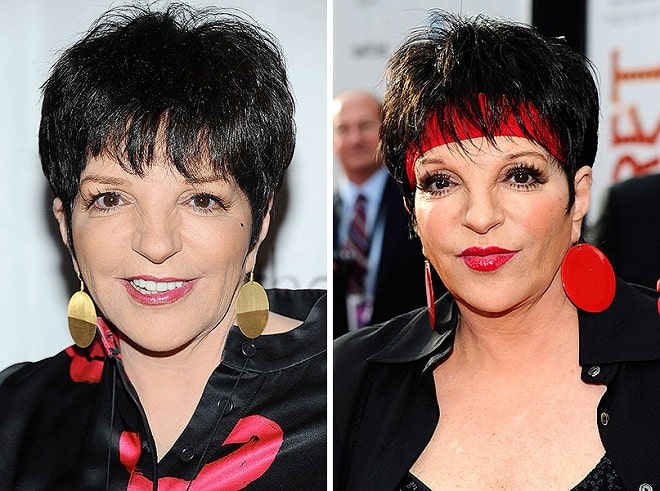 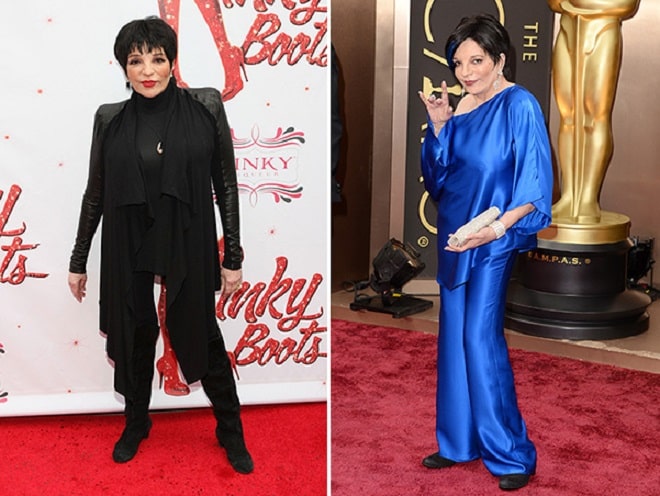 Minnelli is one of those who does not radically change the image. Unlike most actresses, who almost every month appear with a new hair color, a new hairstyle and a new skin tone, Lisa has always adjusted her image very carefully. All her life, the actress prefers makeup with an emphasis on the eyes: black eyeliner, incredibly long false eyelashes. She has been thickly eyelining her eyebrows, but in her youth they were not so black. Now bright eyebrows are also part of her image. Styling has changed quite a bit since the days of “Cabaret”: in the 80s, her smooth haircut became more lush. To her contrasting appearance, Liza always quite correctly chose no less bright clothes. 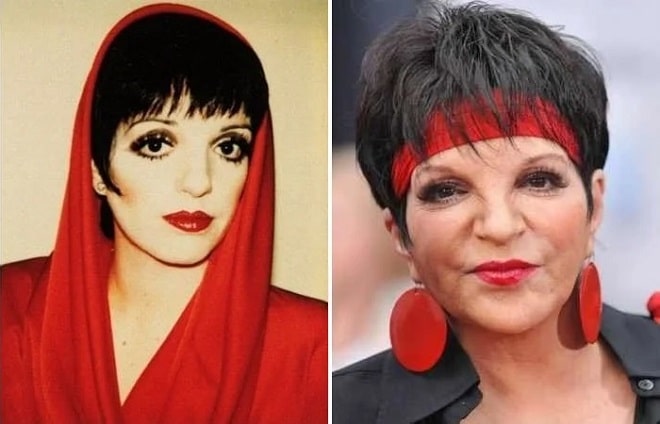 Liza Minnelli has never openly admitted that she went through plastic surgery. But in 2010, the singer attended a social party in New York. Lisa posed for photographers, smiled and looked completely unrecognizable. Her eyes seemed to get even bigger, and there was not a single wrinkle on her face, which looked rather suspicious for a 64-year-old woman.

In general, it seemed that it was very difficult for Minnelli to move the upper part of her face. It was as if the eyebrows were frozen and did not want to move. In addition, the actress’s lips also seemed very unnatural, which suggested that she had botox injections.

Liza Minnelli herself did not comment on journalists’ questions about her appearance. 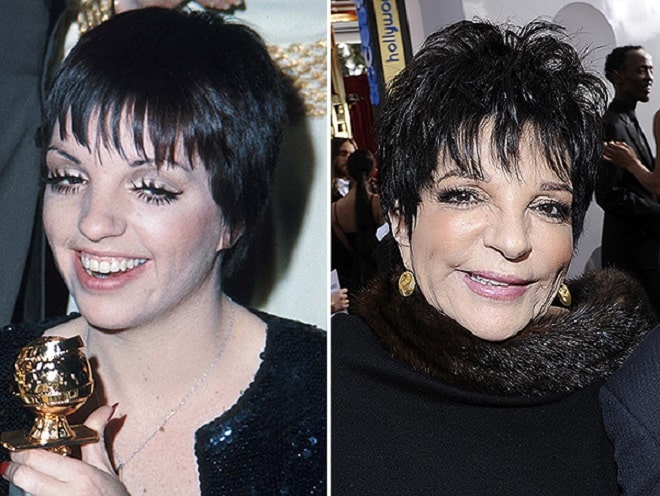 Comparing photos of different years, you can see that Lisa’s eye section has become a different shape, there are no wrinkles on her face, and her eyebrows and forehead do not move when talking. This only confirms that the great actress has repeatedly crossed the threshold of plastic surgery clinics, performing lip surgeries, blepharoplasty and facelift. Apparently, this great woman is no stranger to dreams of eternal youth.