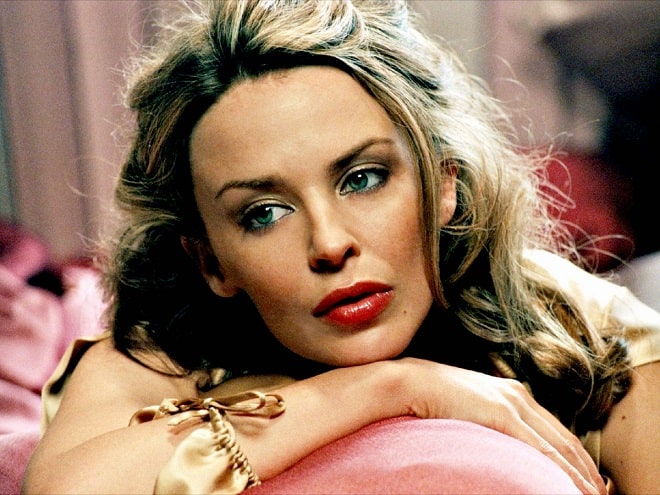 Kylie Minogue is not only a talented and very sexy woman but also a strong, bright and kind personality. Although sometimes celebrities like her are perceived by the public exclusively within the framework of the stage image of the “seductress”.

In addition, Kylie looks younger than her age even despite having suffered a terrible illness (the singer has been struggling with breast cancer for a long time).

Today, the famous beauty is touring again, and also actively participates in charity events in support of women who have faced the same terrible ordeal as her.

Kylie Minogue in her youth

The singer was born on May 28, 1968, in Melbourne. Kylie’s father, Ronald Charles, of Irish descent, worked as an accountant. Her mother, Carol Ann, was a dancer.

Kylie has a younger brother and sister. Brother Brendan works as a cameraman on Australian television.

Kylie’s younger sister, Dannii Minogue, tried herself as a singer and songwriter but did not achieve such popularity as the elder Minogue. The girl also worked as a journalist and fashion model.

Kylie became famous at home and in Europe when she was still a teenager: in the mid-80s she played the role of schoolgirl Charlene Robinson in the Australian television series “Neighbours”.

The song that started Minogue’s musical career is called “I believe”. 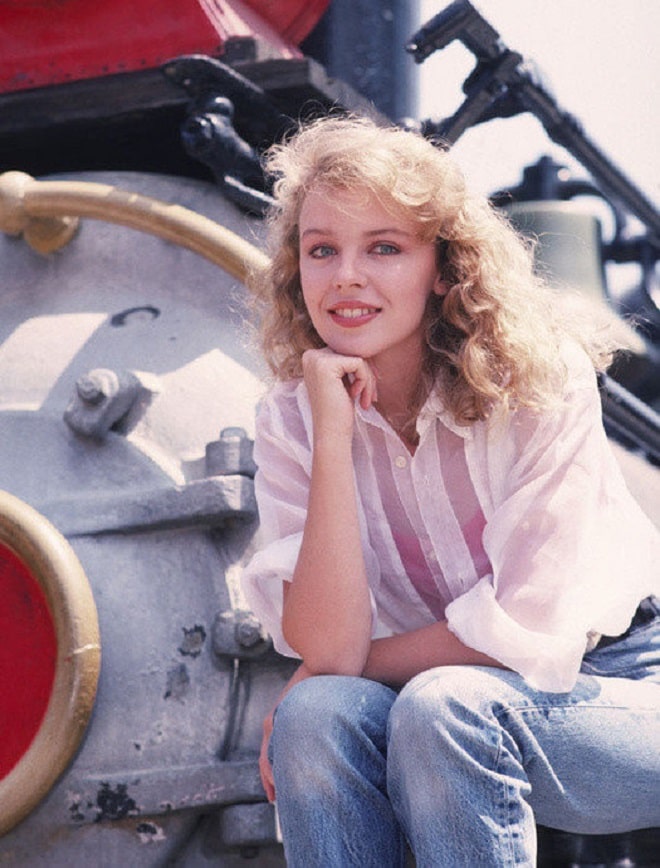 Kylie’s first hit, the song “I Should Be So Lucky”, was written by London musicians in 40 minutes while the girl was waiting for them in the reception (everyone simply forgot that Minogue was supposed to arrive on that day).

Nevertheless, the song, written in haste, stayed at number one in the UK chart for 5 weeks.

In a very short time (from 1989 to 1992), Kylie Minogue underwent radical changes. Having left the image of a pop girl so popular in Australia, she opened up from a completely new, rather “hot” side.

At the dawn of fame, Minogue’s photo did not leave the glossy covers. On them, the young singer was next to Michael Hutchence, the vocalist of INXS.

Roman was ruined by too different tour schedules. At the same time, Michael and Kylie were able to remain friends until Hutchence’s death. His suicide in 1997 knocked Kylie out of the rut for a long time.

The singer completely focused on her music career and stopped acting in the series. The results were staggering: Kylie’s first 13 singles hit the top ten of all UK charts. Even ABBA, The Beatles, Madonna, Michael Jackson, Elton John, Oasis, and David Bowie could not achieve such a result at the time.

The album “Fever” (2001) won two Brit Awards and became multi-platinum in the USA.

By the way, at the same time, the movie “Moulin Rouge!” is released on the big screens, for her work in which Minogue receives a statuette of the MTV Movie Awards for the best episodic role.

At the age of 36, doctors give Kylie a terrible diagnosis – breast cancer. The first reaction, of course, is shocking.

Then there was a course of chemotherapy and surgery, and depression. The consequences of chemotherapy, are known to everyone (hair loss, dramatic weight loss, worsened skin condition).

Also, the press interest and the constant persecution of the paparazzi could not but affect the singer’s mental health.

However, the support of loved ones and fans was stronger. Olivier Martinez was with her the whole time. The singer admitted that it was he who became the best medicine for her. 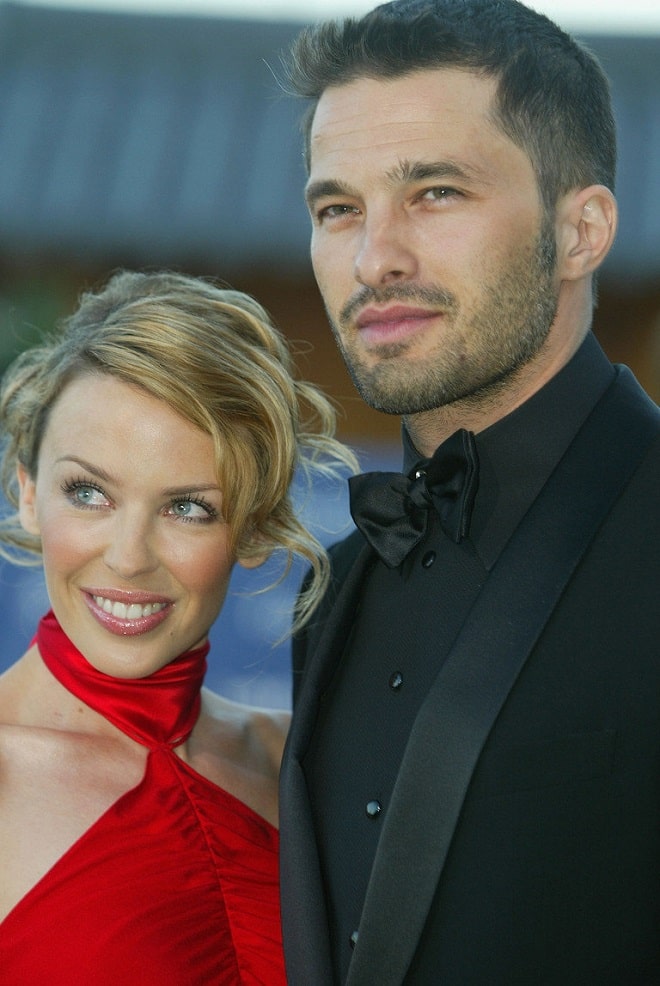 The boyfriend also supported Kylie in an effort to attract public attention to the problem of breast cancer.

Already in 2006, Kylie Minogue returns to the stage. At the same time, she manages to combine his musical career with the release of the first children’s book “The Showgirl Princess”, work on his own perfume “Darling”, and the release of other products under the Kylie Minogue brand.

In 2008, the British finally appreciated Kylie’s contribution to their musical world — at an official ceremony at Buckingham Palace, Prince Charles awarded the singer the Order of the British Empire.

During the same period, Kylie was waiting for huge changes in her personal life, in 2007, she broke up with Olivier. For many fans, it was a shock, because the couple went through the most difficult trials. How so? 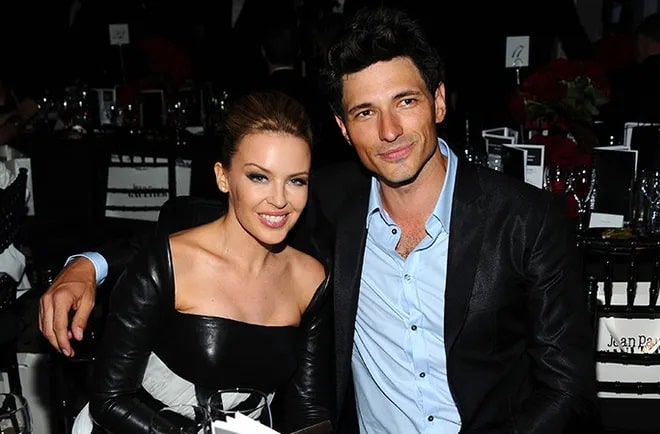 A year later, Minogue met model Andres Velencoso, with whom she spent 5 years. Just six months before the singer’s 45th birthday, the couple announced their separation. 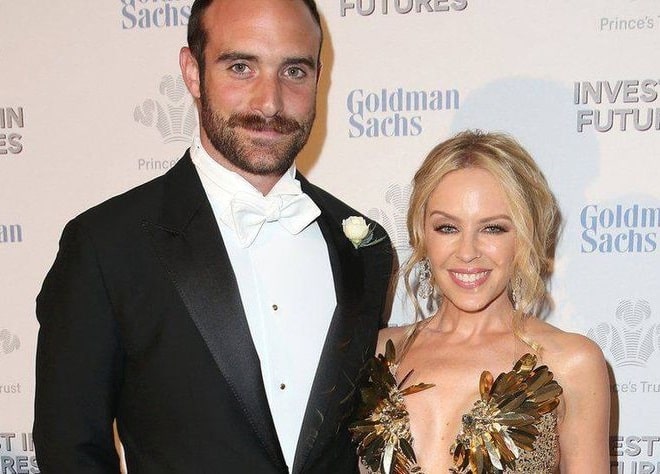 After, Minogue had an affair with an actor Joshua Sasse. 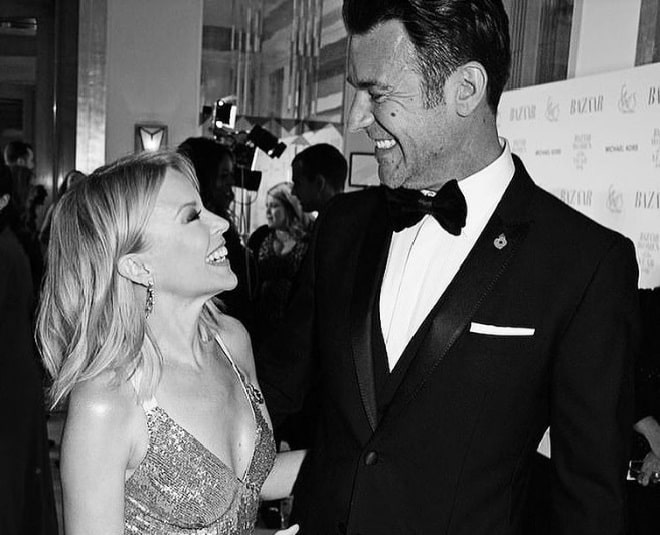 Since February 2018, her lover is Paul Solomons. In early February 2021, it became known about the engagement of the couple.

The once plump-cheeked pretty singer Kylie Minogue conquered the world precisely with her simplicity and pretty appearance. But as the years go by, the singer decided that it was time to resort to more radical methods. Of course, the terrible disease left its mark and after a long rehabilitation period, the star made every effort to look as young as ever. But she overdid it a little with fillers, now her face turned out to be somewhat pointed. 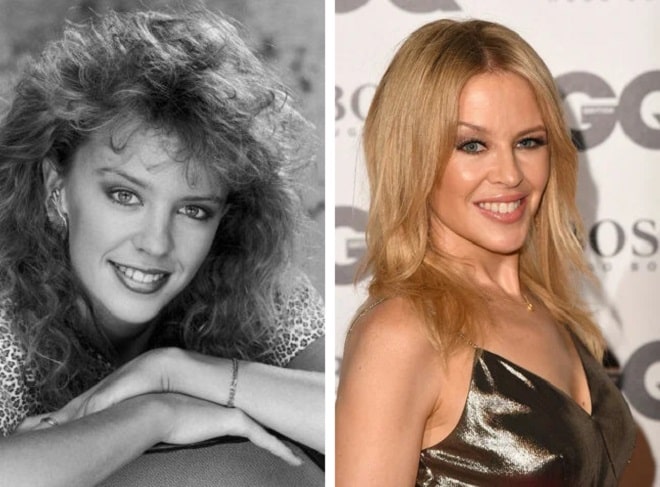 According to the singer, she always felt pressure from society, which demanded that she look perfect. Therefore, the girl often experimented with her appearance, trying to seem younger and more attractive. However, in 2010, she decided to completely abandon botox injections, saying that she was not shy about wrinkles on her face, and preferred a good cream to plastic surgery. And if you need to make beautiful photos for magazines, you can always use makeup or Photoshop! 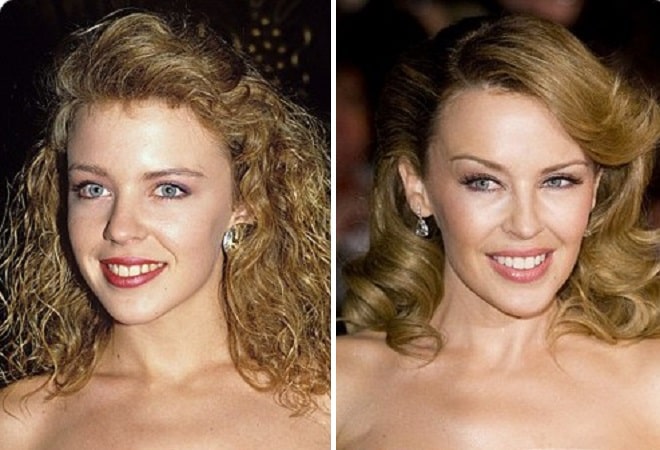 There are rumors that the singer did a lip augmentation, and indeed in some pictures, the singer’s lips look much more voluminous than she was given by nature. As for lip surgery, the singer did not comment on this.

The Australian star regularly attend social events, but at one of them, it was not Kylie Minogue’s bright dress that surprised others, but changes in her appearance. After unsuccessful plastic surgery, one of the singer’s eyes became half-closed. 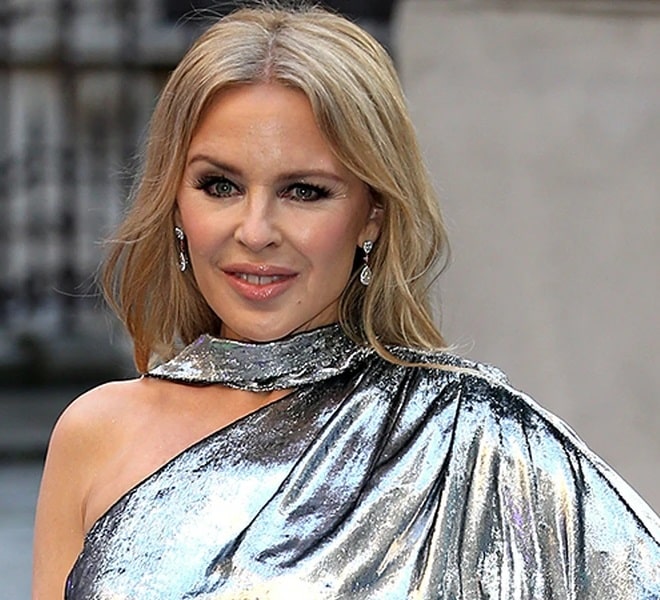 In June 2019, the grand opening of the exhibition “Royal Academy of Arts Summer” took place, which was attended by many stars of the world of show business. Among them was Kylie Minogue, who chose a silver-colored dress for the event. By the way, critics did not appreciate the outfit of the star. But fans paid more attention to the 51-year-old singer’s face, which has changed beyond recognition. They noticed that Kylie Minogue’s left eye was half-closed, and her face seemed distorted.

Experts have long argued that the Australian star too often turns to plastic surgeons, trying to preserve his youth. Kylie uses Botox to smooth out wrinkles in the forehead area, which is why the eyebrow line is sinking more and more. In addition, the singer abuses fillers that are injected into her cheekbones. The chin area is probably left untouched by doctors, as a result of which the cheeks become “heavy”.

There are also rumors that earlier the singer, in addition to injections, also went under the surgeon’s knife, wanting to do a facelift.

By the way, Kylie Minogue has long been recognized as a style icon. Every appearance of the singer becomes an event for fans who admire the beauty of the idol.