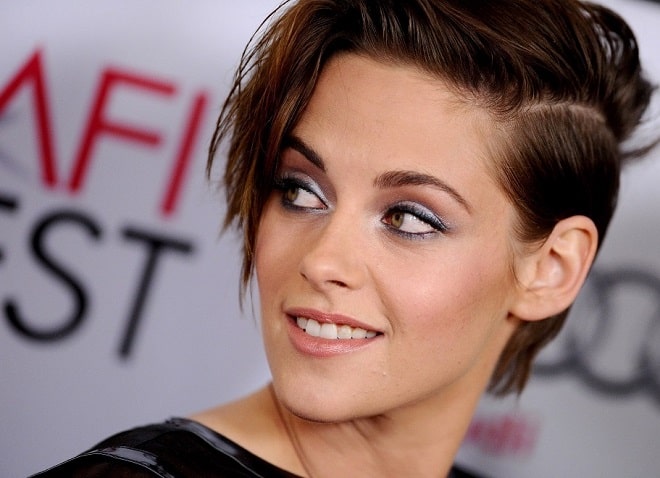 Kristen Stewart is an American actress who plays the role of Bella Swan in the Twilight film series. Her creative biography includes starring roles in films by cult directors and numerous awards at film festivals. In 2012, Forbes magazine reported that Kristen Stewart is the highest-paid actress.

Kristen Stewart in her youth

Kristen was born in April 1990 in Los Angeles, California. The girl spent her childhood in the states of Colorado and Pennsylvania, and only when she was eight years old, the family returned to Los Angeles.

In an interview, Kristen, who made her film debut at the age of 8, admitted that as a child she did not dream of becoming an actress, but she liked to sign autographs to anyone who asked. 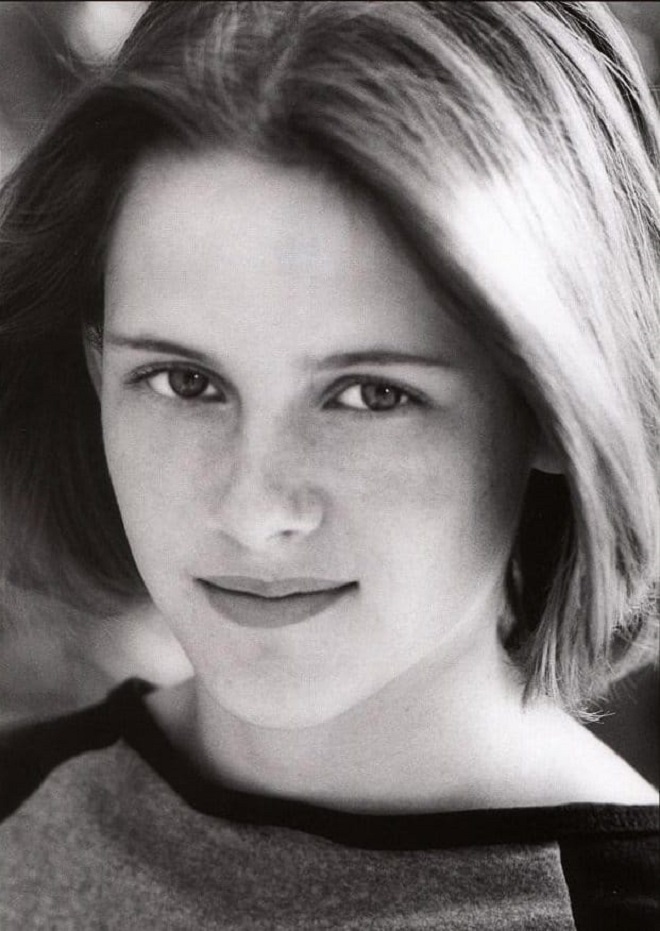 In 1998, during the performance of the song in a school Christmas production, a talent search agent drew attention to it. A year later, Kristen made her debut on the Disney Channel in the comedy TV movie “The Thirteenth Year”. So began Stewart’s acting career, for which she dropped out of school after the seventh grade and switched to homeschooling.

Kristen got a serious role a couple of years after “The Thirteenth Year” in Rose Troche’s independent melodrama “The Safety of Objects”. 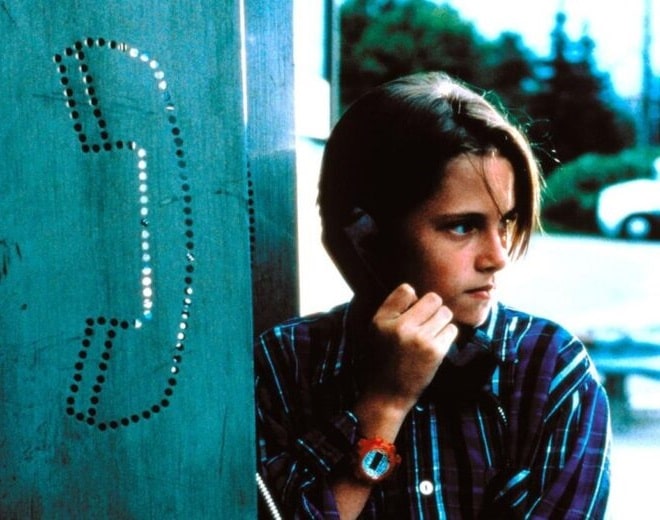 Kristen Stewart in the movie “The Safety of Objects”

The role in the film “Panic Room” by the cult director David Fincher, released in 2002, brought Kristen a nomination for the Young Actor Award. Stewart was in no way inferior to Hollywood stars Jodie Foster, Forest Whitaker, and Patrick Bosco, who was engaged in the film and played the role so convincingly that critics compared her to the famous Jodie Foster in her youth. Foster herself noted that Kristen does not throw out all the emotions at once and in the end, it turns out to be an interesting, smart game.

This was followed by the role in the thriller “Cold Creek Manor” (2003). Stewart’s career began to gain momentum when the teen comedy “Catch That Kid” (2004) was released on the screens, in which the performer played the main role. At the same time, the psychological drama “Undertow” was released. 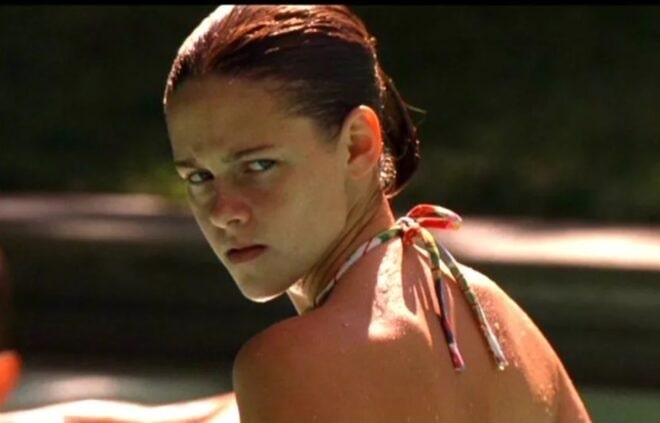 Kristen, at the age of 13, played a difficult role in the film “Speak”.

In 2007, three notable films with Kristen Stewart were released at once: the dramatic movie Sean Penn “Into the Wild”, the horror film “The Messengers”, and the psychological drama “The Cake Eaters”.

The movie “Into the Wild” was a success and collected 23 awards, received a Golden Globe for the best soundtrack, and was recognized by the American Institute of Cinematography as the best film of the year.

In the fall of 2007, Kristen was approved for the role of Bella Swan in the vampire saga “Twilight”. Participation in the film made the actress a world-class star. For playing in the second part, Stewart was awarded two prestigious MTV awards at once, including for the best kiss with her partner in the film Robert Pattinson. 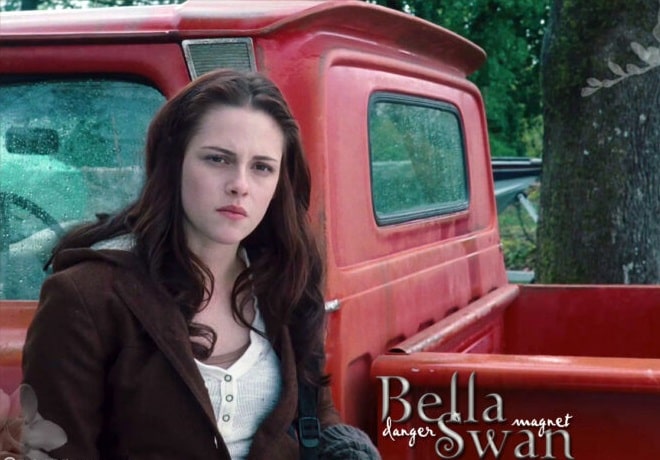 Kristen Stewart in the movie “Twilight”

In 2008, the film “What Just Happened?” and “Jumper” with the participation of the actress were released. In 2009 the melodrama “Adventureland”. In 2010, in the film “The Runaways” starring Dakota Fanning. Stewart demonstrated her excellent vocal abilities.

For the sake of playing the role of a prostitute in the movie “Welcome to the Rileys”, released in 2010, she learned to dance a striptease. The filmmakers saw Kristen in this role to such an extent that they waited two years until she came of age. 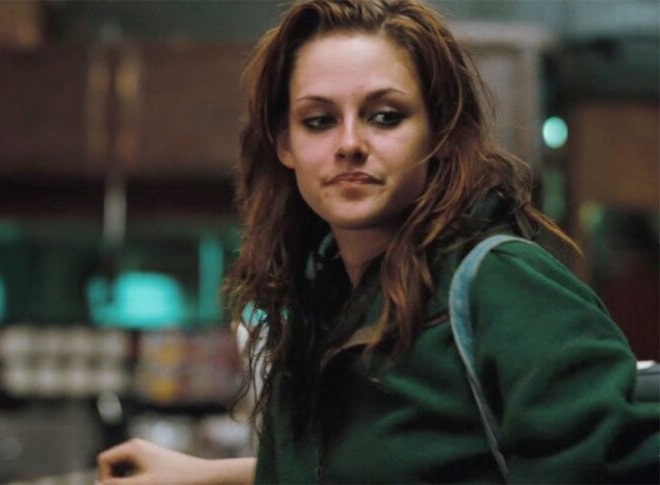 Kristen Stewart in the movie “Welcome to the Rileys”

In 2012, the actress starred in the adventure film “Snow White and the Huntsman”. The film won an Oscar in two technical nominations. Stewart was nominated for the Golden Raspberry for her work in the film.

Interesting diverse roles went to the actress in 2014 – a prison guard in the film “Camp X-Ray”, a student of Columbia University in the independent drama “Anesthesia”, as well as Lydia in the film “Still Alice”. 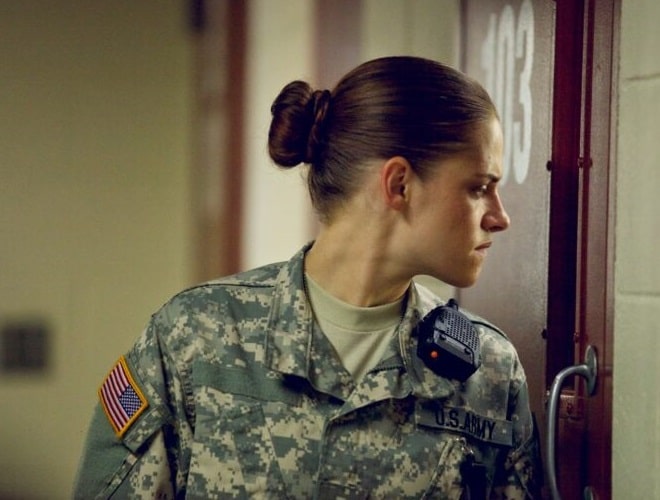 One of the first professional awards Stewart received was not for the role of Bella in “Twilight”, but for the best performance of a supporting role in the 2014 film “Clouds of Sils Maria” by French director Olivier Assayas. Kristen Stewart was awarded the Cesar Award.

In 2015, Kristen starred in the comedy thriller “American Ultra”, which failed at the box office. A little later, the actress tried herself in the genre of “dystopia”, together with Nicholas Holt playing in the fantastic film “Equals”. 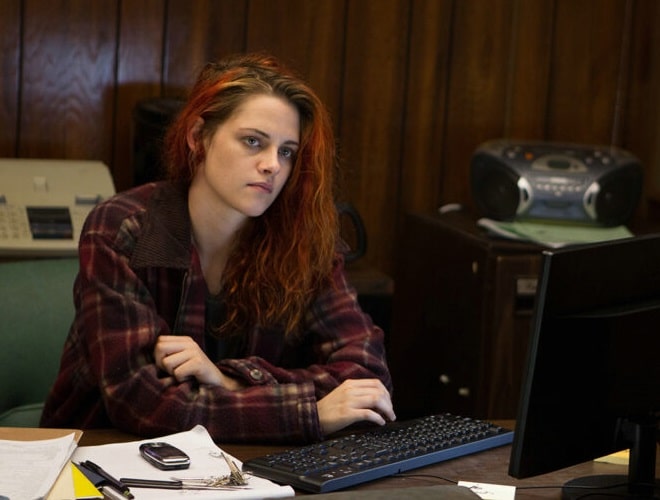 Director Olivier Assayas in 2016 released the psychological thriller “Personal Shopper”, where Stewart was assigned the main role. The collaboration proved successful for both. Assayas won the Palme d’Or at the Cannes Film Festival as the best director, and Stewart won the prize of the Oaxaca FilmFest International Film Festival as the best actress and was nominated for nine more prizes.

In 2018, Kristen starred in the biographical drama “JTLeroy”. 2019 was the most fruitful year in Kristen Stewart’s creative biography in terms of the number of awards. Kristen received the Deauville Award for Talent, the Spotlight Award at the Mill Valley Film Festival, and the Golden Eye Award at the Zurich Film Festival for her leading role in the film “Seberg”. 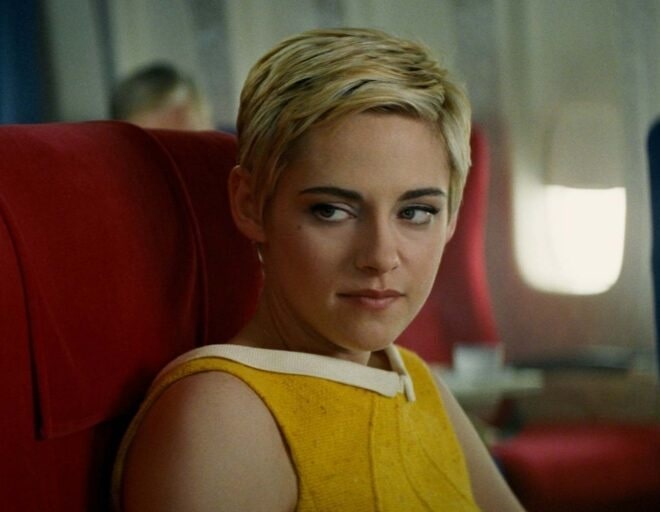 Kristen Stewart in the movie “Seberg”

In 2020, the romantic comedy “Happiest Season” with Stewart in the title role was released. The actress has truly started a happy season – on January 9, 2020, the Hollywood Film Critics Association presented Kristen Stewart with the Actress of the Decade award. 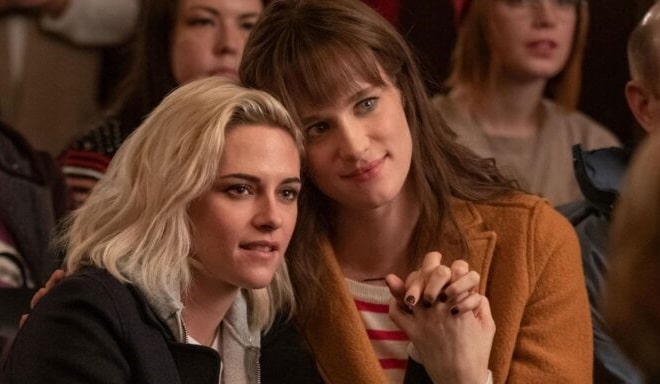 In 2021, Kristen starred in the film “Spencer”. Stewart played the role of Princess Diana. The actress approached this role with extreme seriousness. She hid from journalists for a while, not wanting to discuss criticism after her approval for the role of a princess. In one interview, she admitted that she wanted not just to play Diana, but “to get to know her unconditionally.” A lot of effort had to be made to “catch” the voice of the princess, her unique accent. Many fans are sure that Stewart does not look like Princess Diana.

Did Kristen Stewart have plastic surgery?

The appearance of the girl began to be actively discussed in the press at the time of the release of a series of fantastic films based on the books of Stephanie Meyer’s “Twilight”. Since then, the debate about her beauty has not stopped: some consider her a refined and attractive girl, others criticize her angular forms.

We studied Kristen Stewart’s photos and watched several films with her participation in the main roles to understand why her appearance causes so much controversy and whether her beauty can be called ideal from the point of view of aesthetics promoted today in modern society. 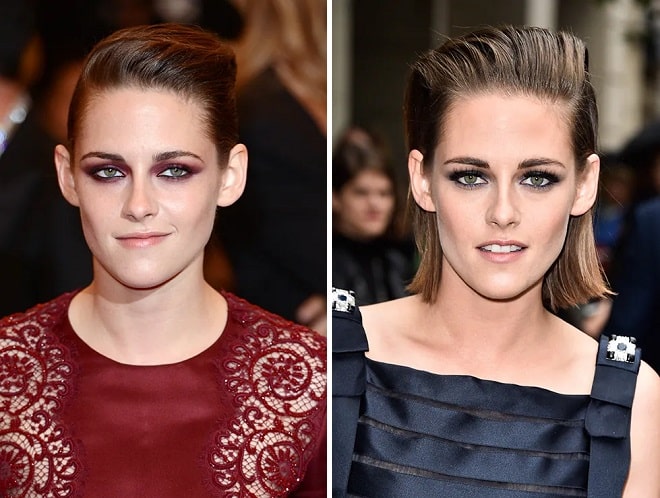 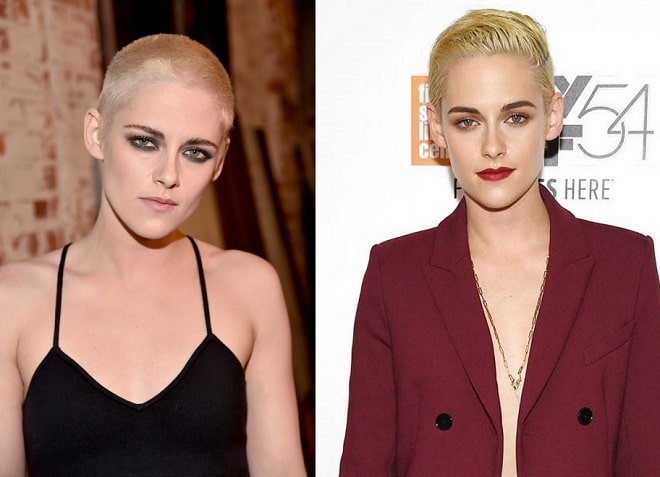 She does not have a complex about small breasts and loves herself the way she is. But in Hollywood, rumors keep popping up that Stewart visited a plastic surgeon and had a boob job.

Did Kristen Stewart have a nose job? 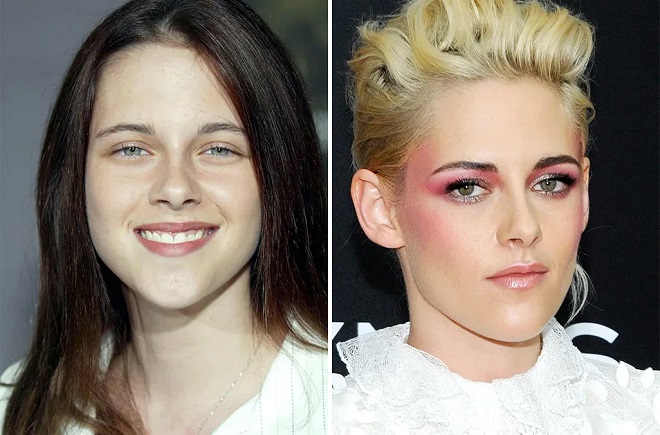 The actress once said that she thinks women who voluntarily go under the knife of a plastic surgeon are crazy. Really, Kristen? And how, then, did you miraculously change the shape of your nose? Is it just a successful makeup or was it rhinoplasty after all?