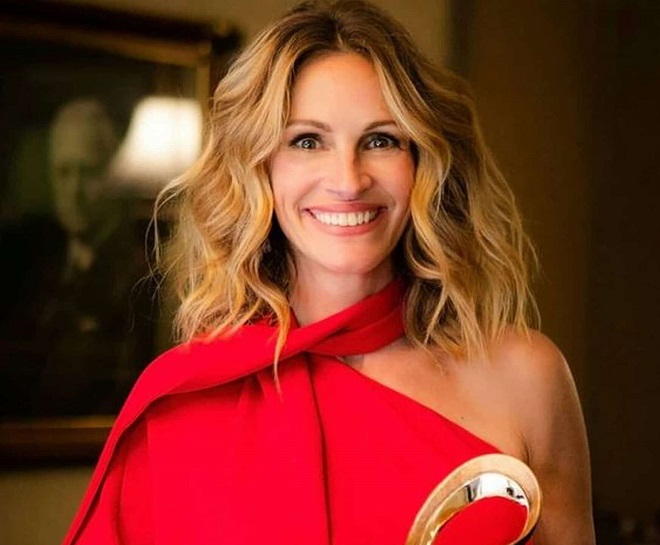 Julia Roberts, a popular Hollywood actress, one of the most sought-after stars, whose fame was brought by the role in “Beauty”. The actress is an Oscar and Golden Globe winner. Roberts’ filmography includes several dozen films, each of which certainly became a box office success thanks to Julia’s irresistible smile and her acting talent.

Julia Roberts in her youth

Julia Roberts was born on October 28, 1967, in Smyrna, Georgia. She is the third child in the family. She has a brother Eric and a sister, Lisa. Julia’s father, Walter Grady Roberts, an actor and writer, was engaged in the sale of water mattresses. Her mother, Betty Lou Bredemas, an actress, served as a secretary in a church parish. The parents of the future star taught at the children’s acting school in Decatur. It is not surprising that all their own children have chosen the acting profession. 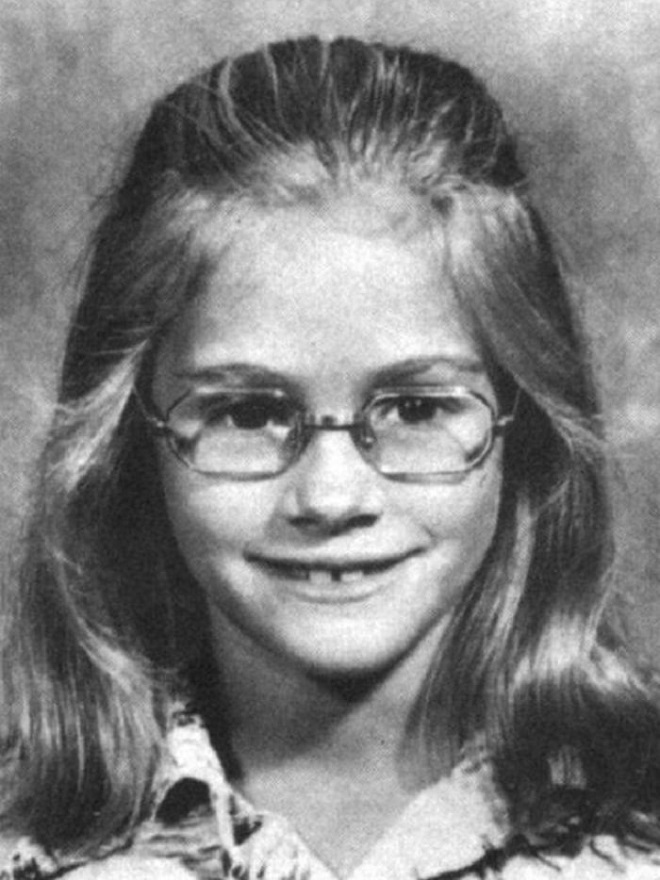 When Julia was born, there were difficult times in the family – there were not enough funds for existence. If not for the help of Coretta Scott King, the widow of the famous black rights activist Martin Luther King, whose children were students of the Roberts studio, it is unknown how Julia’s mother would have coped with the situation.

In 1971, when Julia’s parents divorced, Eric stayed with his father and moved with him to Atlanta. Betty Lou Bredemas married theater critic Mile Motes a year later. In this marriage, Betty gave birth to a third daughter, Nancy Motes. Her husband did not like children from his first marriage and did not even try to hide it. He often let his hands loose and the children got the most. Julia Roberts never told the press about, unlike Eric, who made several frank statements.

As a child, Roberts was very friendly with her sisters. When Julia was a ten-year-old girl, her father died of oncology. Julia has fond memories of him.

When Michael Motes left the family, the mother of four children found herself in a difficult situation again. From the age of thirteen, Julia, to help her mother, worked as a waitress, first in a pizzeria, then in various cafes and eateries. 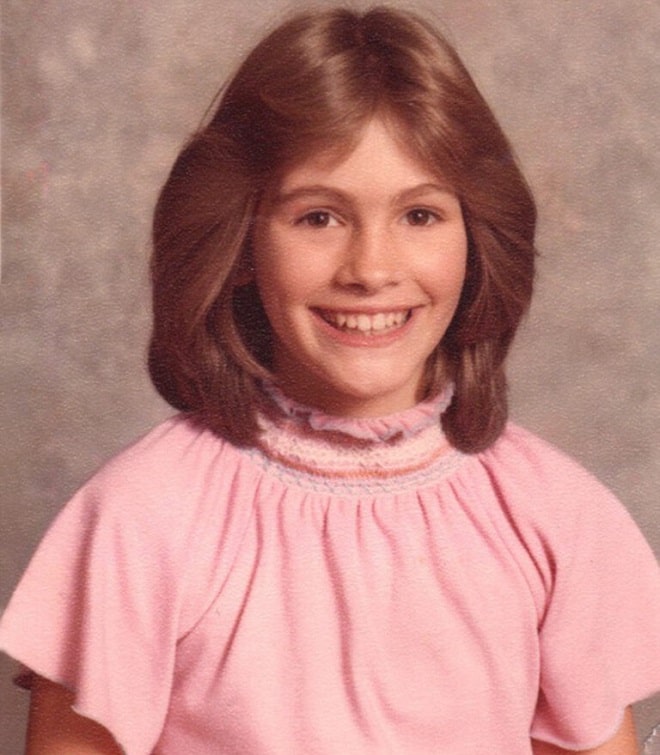 In her free time from school and work, she learned to play the clarinet and participated in beauty contests in the city of Smyrna. Every year she became more and more interested in the acting profession. Moreover, the elder brother was the first to make noticeable progress in this field. In 1972, he entered the Royal Academy of Drama in London, then the American Theater Academy in New York, a little later he began performing on Broadway.

After graduating from high school, Julia Roberts tried to enter the University of Georgia but failed. After, hoping to get to film auditions, she went to New York, by that time her sister Lisa had already settled.

She managed to get a job at the Click modeling agency and participate in the photoshoots. At the same time, the future star began to attend acting courses. 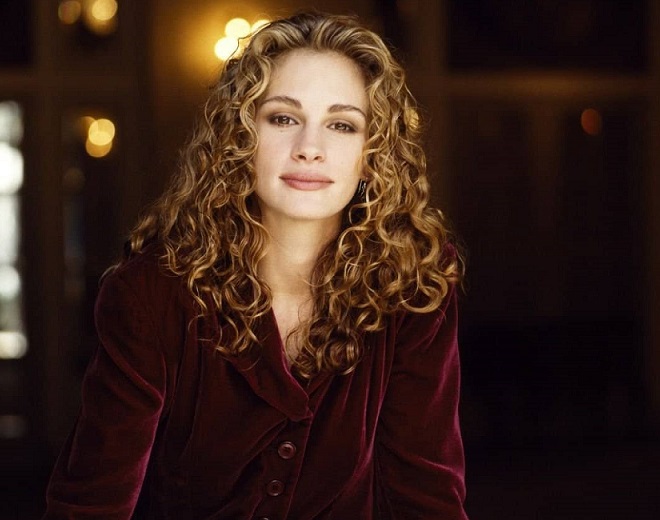 After a series of screen tests, Julia was finally approved for a role in the film “Firehouse” (1986). Not the film itself, not the debut of the actress did not become something remarkable in her biography.

The matter shifted when in 1987 Eric Roberts recommended her to his producers for a cameo role in the western “Blood Red”, where he played the main role. The film was released only three years later. During these three years, with the help of her brother, she starred in several more films.

For the role of a rocker in the movie “Satisfaction”, Julia learned to knock on drums and play bass guitar. And for filming in the romantic comedy “Mystic Pizza”, where she had the main role, she dyed her brown hair red, which later became her feature.

Julia’s next work in the film “Steel Magnolias” (1989) attracted the attention of not only viewers but also critics. For her role, she was awarded a Golden Globe Award and nominated for an Oscar in the Best Supporting Actress category. 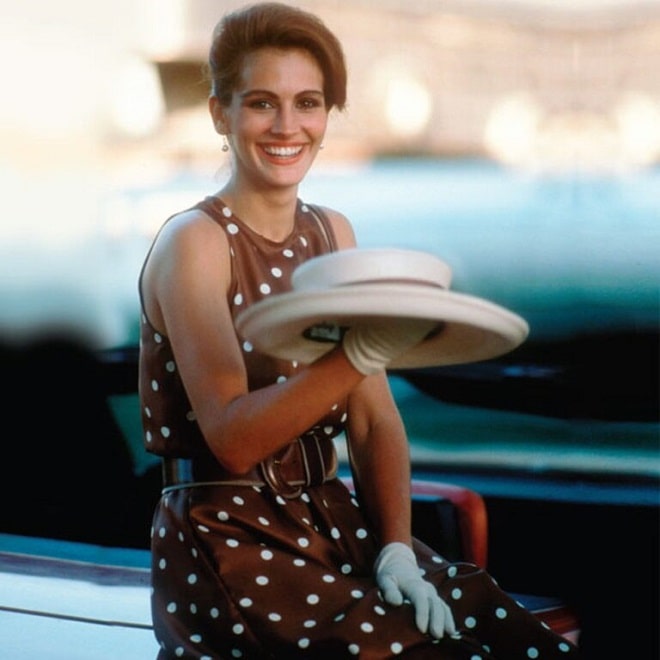 In 1990, after the release of the movie “Pretty Woman”, Roberts woke up famous, a real star of the world scale. She was awarded the Golden Globe again and was awarded a second Oscar nomination. From that moment on, the actress acquired the status of world-class movie star and became one of the highest-paid actresses in Hollywood.

After four films appeared with the participation of the Hollywood beauty: she starred in “Sleeping with the enemy”, “Dying Young”, “The Pelican Brief” and “Hook”, collaborating with such famous directors as Steven Spielberg, Joseph Ruben, Alan Pakul and Joel Schumacher.

A few years later, Julia took part in the filming of “My Best Friend’s Wedding”, which was liked by both film critics and viewers. Then she appeared in “Stepmom”, “Conspiracy Theory” and “Runaway bride”.

The real achievement in Julia Roberts’ profession, according to everyone’s opinion, was the role of an environmentalist in the biographical film “Erin Brockovich” (2000). The current topic brought the film “Oscars” in five nominations, one of the statuettes was received by Julia Roberts. In addition, she was awarded a BAFTA Award and a third Golden Globe. The film was an incredible commercial success, collecting 256 million dollars at the box office. 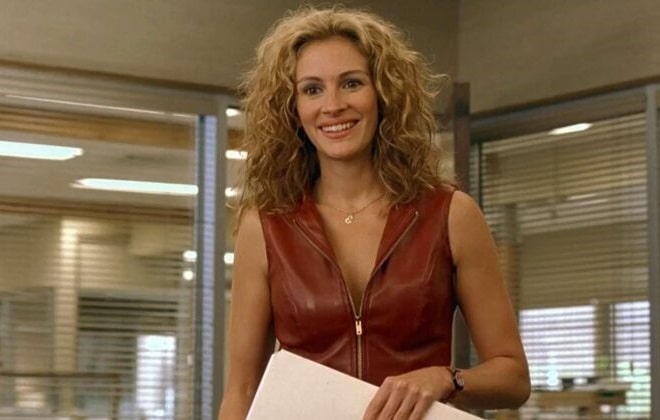 Further, the creative biography of the actress was only replenished with successful works. In the popular film “Ocean’s Eleven” (2003), the actress very successfully fit into the cast. For the role in the movie “Mona Lisa Smile” (2003) she received a huge fee of fifty million dollars.

Roberts deservedly received the next Golden Globe Award for her participation in the drama “Charlie Wilson’s War” (2007), in which her partners were Tom Hanks and Philip Seymour Hoffman.

Julia’s filmography boasts a variety of films, vivid roles, and incredible reincarnations. The role of a woman who goes to Bali in search of herself and God in the film “Eat, Pray, Love” directed by Ryan Murphy (2010) was very close to the actress, as she, by her own admission, is an adherent of Hinduism.

In 2010, for the twelfth time, People magazine included Julia Roberts in the list of the most beautiful people on the planet. 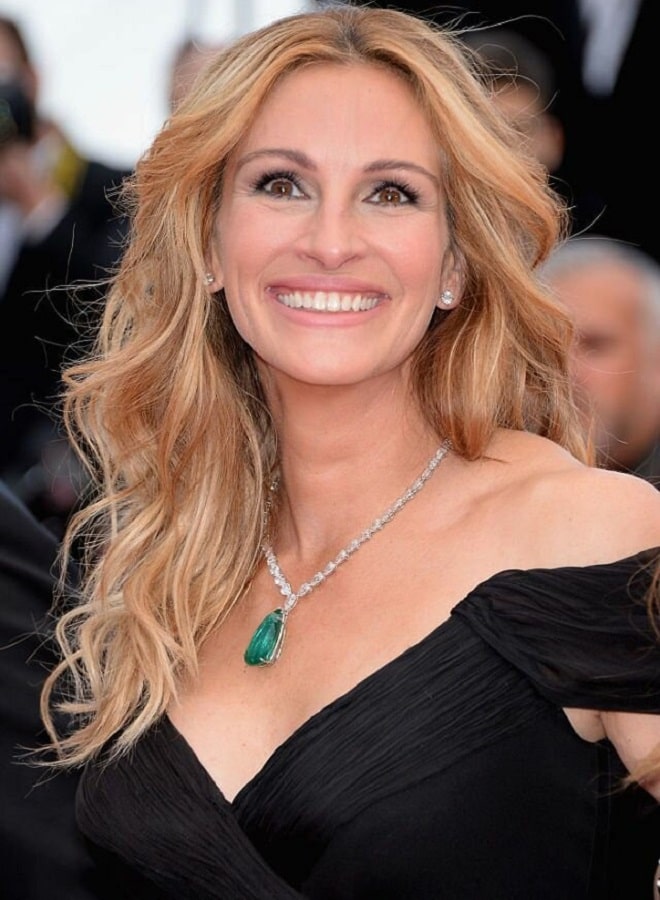 In 2018, the actress starred in the complex psychological film “Ben is Back” and in the drama TV series “Homecoming”.

Julia Roberts became the face of Givenchy, showing a pantsuit in men’s style and a lace blouse without styling and with a minimum of makeup.

The actress repeated her iconic image from the “Pretty Woman” in an advertising photoshoot of the Calzedonia brand, the face of which the actress has been for several years.

In addition, the Hollywood star cooperates with the French company L’Oreal. In 2018, she starred in an advertisement for the fragrance La Vie Est Belle of the cosmetic brand Lancome.

In her younger years, Julia Roberts had a very stormy personal life. She had affairs with many famous actors, including Kiefer Sutherland, Benjamin Bratt, Liam Neilson, Matthew Perry. All of them were accompanied by emotional showdowns, scandals, and infidelities. Several times the press reported on the appointed date of Julia’s wedding with her lover. 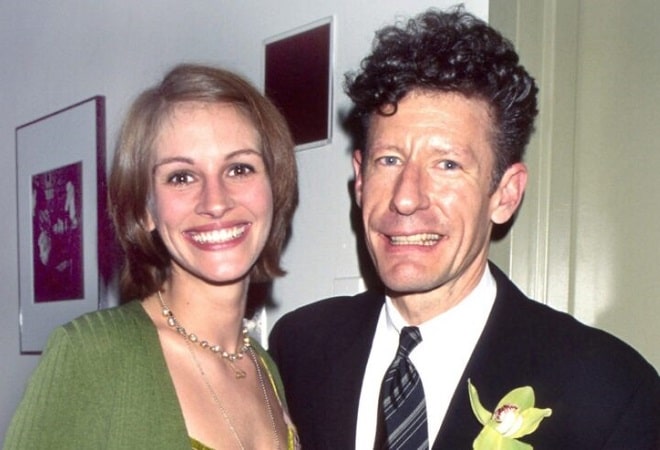 The first official spouse of Hollywood beauty was Lyle Lovett. The young man proposed to his beloved three weeks after the day of acquaintance, and Julia, without thinking twice, agreed. Two years later, Roberts and Lovett decided to end their marriage. 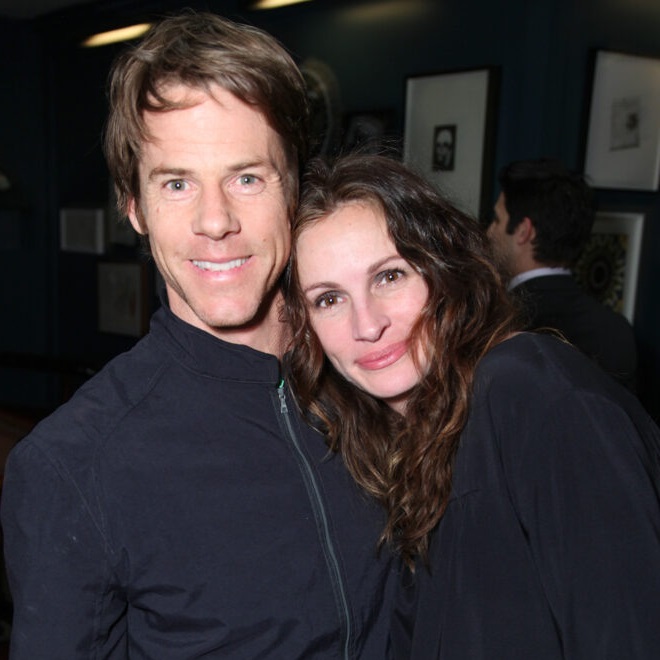 Julia’s second husband — Daniel Moder. At the time of meeting the actress, the cameraman was officially married, but could not resist the charm of Roberts.

On July 4, 2002, a magnificent wedding took place. In 2004, the couple had twins — daughter Hazel Patricia and son Finneas Walter, and in 2007 Julia gave birth to a third child – Henry Daniel. 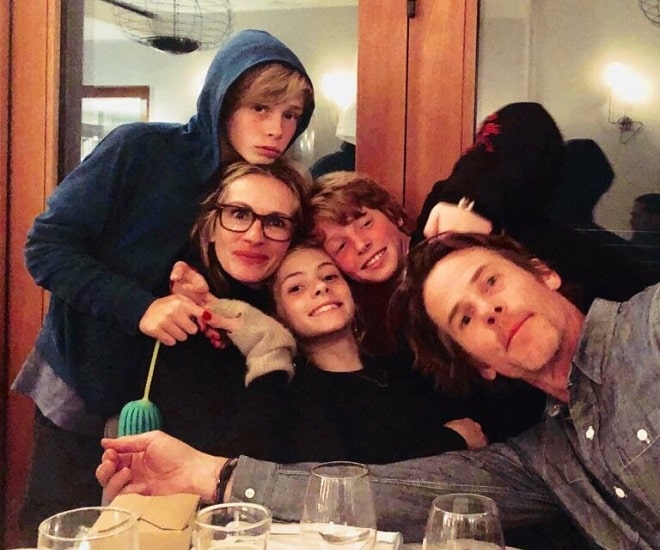 Julia Roberts with her family

Did Julia Roberts have plastic surgery?

The actress never ceases to amaze her fans with the slimness of her figure and the freshness of her face. In her interviews, Julia admits that she makes no effort to preserve her figure and is an opponent of plastic surgery. She believes that everything that happens to a person should naturally be reflected on his face. 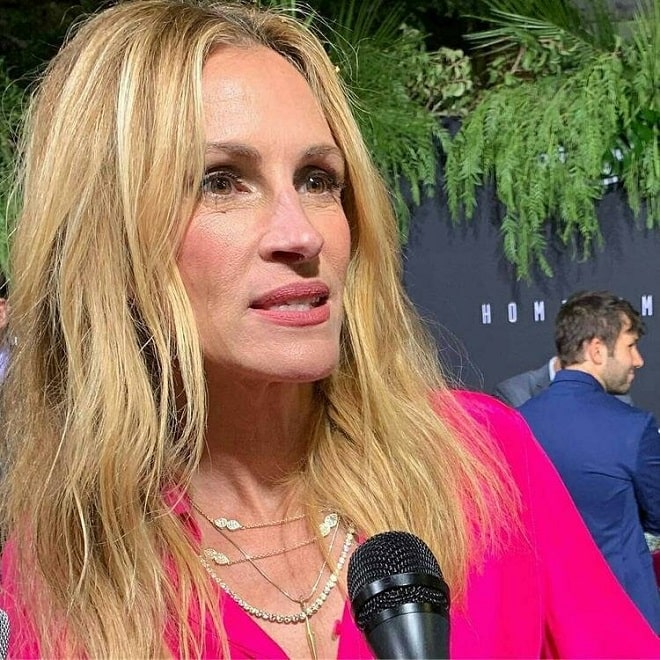 Julia Roberts is shining and does not give the impression of an age-old woman, despite the number of wrinkles on her face.

Maybe Julia’s secret is that she really follows her philosophy, professes natural aging, asceticism in makeup, and a conscious approach to life.

In an interview, Julia admitted that she can’t stick to a carbohydrate-free diet simply because she can’t give up bread. Of course, that doesn’t mean she eats pizza all day long. The Roberts family also adheres to conscious nutrition.

Julia has workouts four times a week. The star prefers yoga, practices Pilates, and swims in the pool.

Roberts is not afraid of aging and openly declares his negative attitude to plastic surgery. 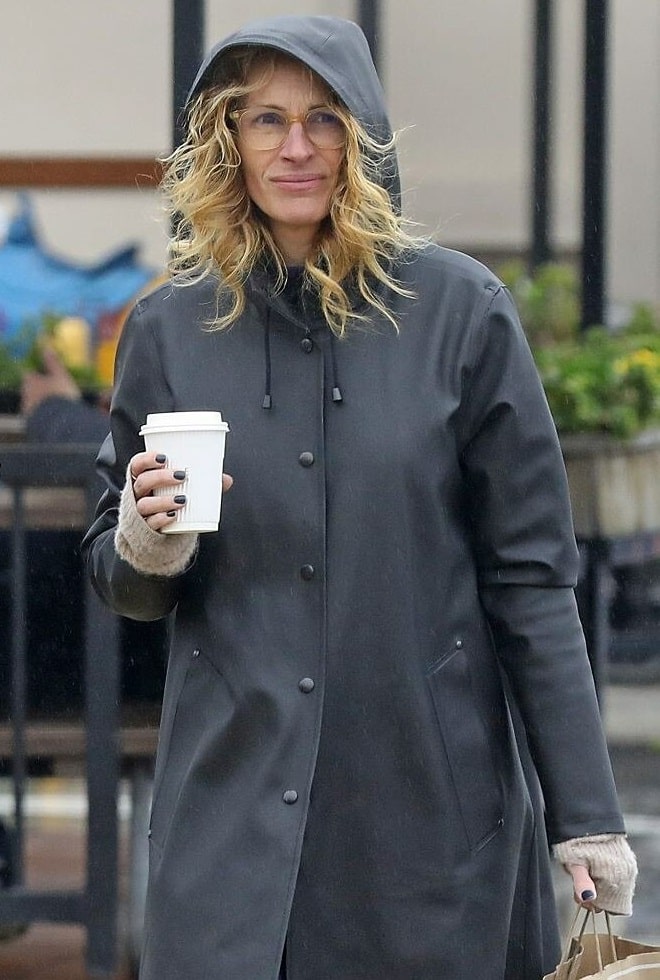 “Today I want to tell everyone that I don’t want to put up with cosmetics anymore. I don’t want to do makeup. I know I have wrinkles, but I want to see them. After all, I’m real. I want you to accept me for who I am.” – said Julia Roberts.