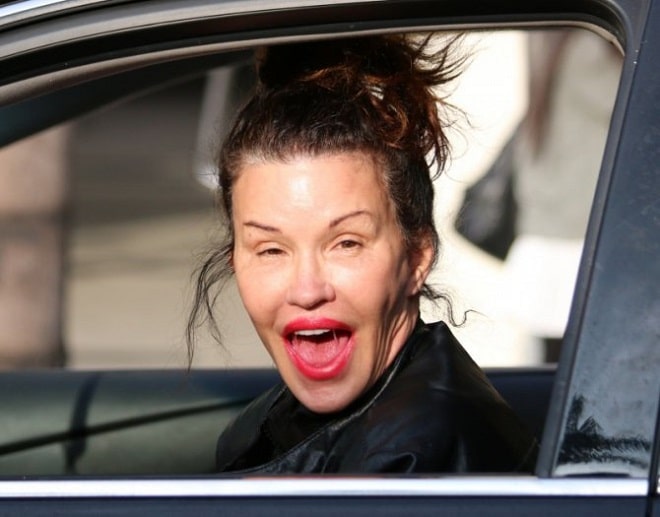 Today, the former supermodel of the 70s Janice Dickinson is known as the host of her own TV show “Model School of the witch Janice” and as a member of the jury of the famous model project of Tyra Banks “Top model in American style”. And the woman also claims that she is the author of the term “supermodel”, which became popular in the 90s.

Quarrelsome, disfigured by plastic surgery and injections, demanding and scandalous – this is how we see Janice Dickinson today. In her youth, the model rapidly soared to the fashionable Olympus, conquered everyone with her audacious beauty, and then, unfortunately, could not come to terms with the most natural life process of the human body – aging…

Janice was nicknamed “the witch” not so much for her magical beauty, but for her explosive complex character. But there were reasons for that, and they are hidden, as often happens, in a difficult childhood…

The future star of the world catwalk was born in one of the poorest areas of New York, in Brooklyn, on February 15, 1955. Her nurse mother was an emigrant from Poland, and her military father was from Ireland. In addition to Janice, there were two other daughters in the family: the elder Alexia and the younger Deborah.

The girls had to learn independence from childhood since their parents were not engaged in their upbringing. And no, not at all because they worked a lot… The mother and father had a long-term alcohol addiction – all the family’s money was spent on booze and a questionable snack.

When parents got drunk, they became aggressive: they could row noisily, even fight. Janice’s mother often walked in bruises and took out her anger on her little daughters. The girls grew up in a very unhealthy atmosphere almost from birth… Screams, scandals, slaps…

But that wasn’t even the scariest part. Later in her autobiography “No One will Protect” Janice will also talk about childhood moments that she would prefer to forget, and about her monster father. When the future model turned 9 years old, her father began to molest her dirty. And over her 5-year-old sister, he committed violent acts regularly…

Janice was cunning and brave, and each time she miraculously managed to avoid the abuse itself, which incredibly angered her father. The mentally unstable man literally hated the middle daughter and tried in every way to break her will. “You are nobody and you will always be nobody!” he often shouted in rage. And Janice, trying to hold back tears, promised herself that she would definitely become rich and influential, and then she would leave, getting rid of her monster father forever.

Time passed, and Janice gradually turned into a real beauty. On the street, the girl often caught the interested glances of men and envious ones of women. Someone from friends advised Dickinson to take part in a beauty contest, and the girl immediately jumped at the idea.

It was the beginning of the 70s, other beauty standards prevailed on the catwalk: blue-eyed blondes with chiseled figures were in fashion. However, Dickinson’s expressive beauty was appreciated – she won the national contest “Miss Haute Couture”. And resolutely began to storm the auditions in the most famous modeling agencies of the States, armed with her small and very poor portfolio.

In the legendary Ford Models, Janice was refused, considering her beauty to be ordinary and too “folk”. But the agency of Jacques Silverstein, where the girl lied that her main portfolio was under consideration by another employer, decided to hire Dickinson.

Having signed a contract with the agency, Janice immediately started working. And her very first photoshoot got on the “Vogue” page. In the future, the model decorated the cover of this edition as many as 37 times. 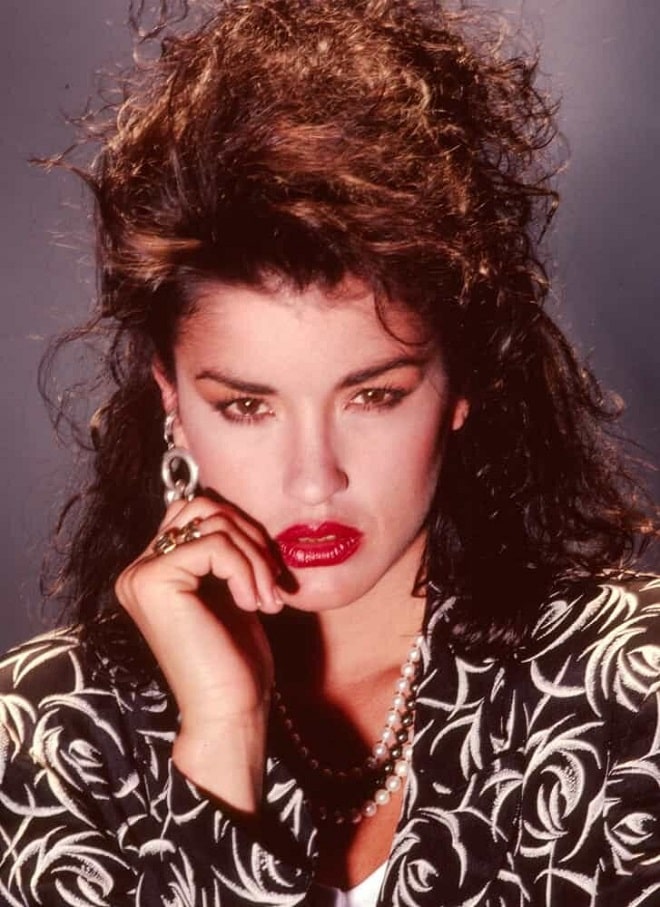 She worked first in the USA, then in Europe, then again in the USA. Everyone wanted to cooperate with Janice Dickinson: famous fashion publications, world-famous brands, the best photographers in the world. In the early 80s, Janice became the highest-paid model – for one shooting day, the girl received at least $ 2,000.

Since the age of 19, Janice has been firmly hooked on banned substances. The strangest thing is that the model did not hesitate to openly talk about her addiction in an interview. Many regarded such frankness as a bold PR, but in fact, with the help of narcotic drugs, the girl tried to cope with the nightmares of the past that tormented her at night.

One day Janice forgot herself so much that she came to the show in a state of alcoholic intoxication and fell from the podium directly onto a guest from the front row, who turned out to be the legendary actress Sophia Loren.

The beautiful model has always had a lot of men. She had high-profile affairs with famous bachelors of that time: Liam Neeson, Jack Nicholson, Truman Capote, Mick Jagger, Bruce Willis, Sylvester Stallone. 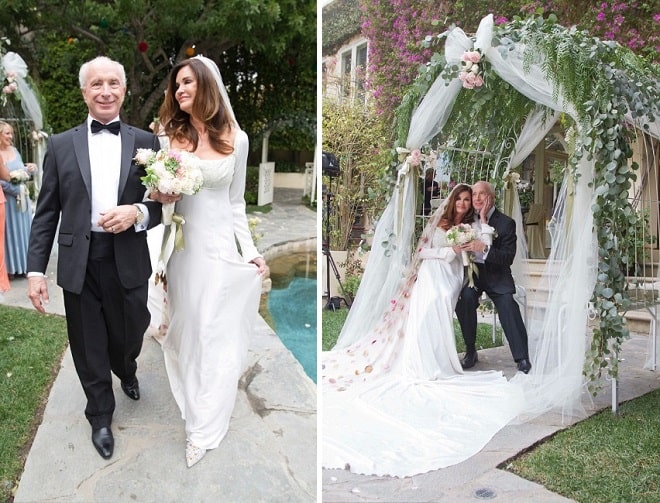 Janice has two children: daughter Savannah Dickinson and son Nathan Fields. Dickinson also behaved strangely with men: if something did not go the way she wanted, the woman began to make a row and could even let her hands loose. But motherhood seems to have had a beneficial effect on Janice: she did away with harmful addictions and night parties for the sake of children.

The first plastic surgeries appeared in the model’s life in the late 90s, when her career began to decline. Janice tried to hold on to her elusive youth with botox injections and a surgeon’s scalpel. As a result, the woman was so carried away by this senseless struggle that today there is no trace of her former beauty… 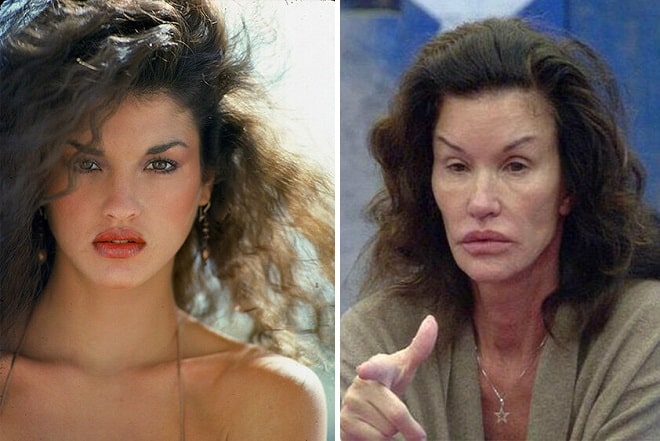 The supermodel has repeatedly become a client of plastic surgery centers. Janice Dickinson had breast augmentation, rhinoplasty, lip augmentation with injections of fillers.

Wanting to correct the external manifestations of a turbulent youth, Janice had a nose job, a face and neck lift, blepharoplasty, liposuction, and a tummy tuck. The star has repeatedly had Botox injections in the forehead and around the eyes. And she also uses fillers in the lower third of the face (lips, cheekbones, chin).

A series of plastic surgeries ruined the appearance, but the former model was not confused by this moment. Janice openly talks about her experience and demonstrates on camera the process of changing breast implants.

Let’s take a look at the photos and compare how Janice Dickinson looked in her youth and how her appearance changed after numerous plastic surgeries on her face and body. 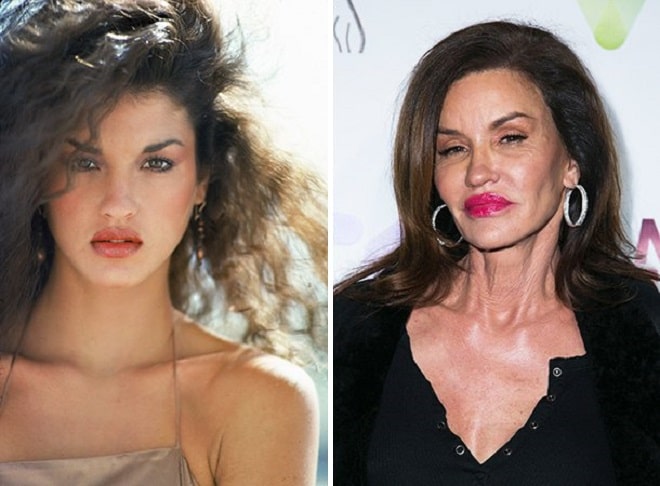 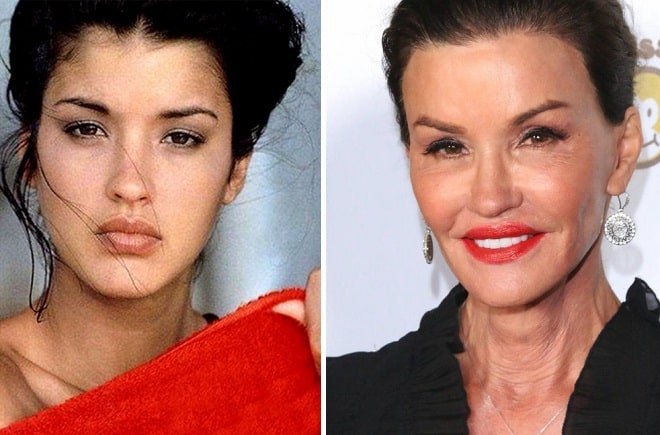 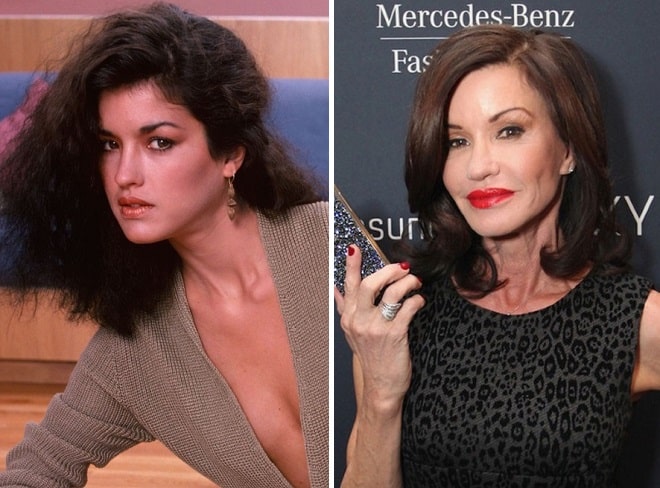 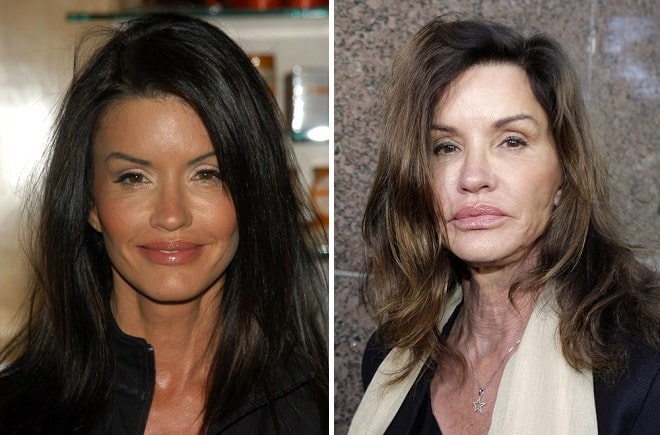 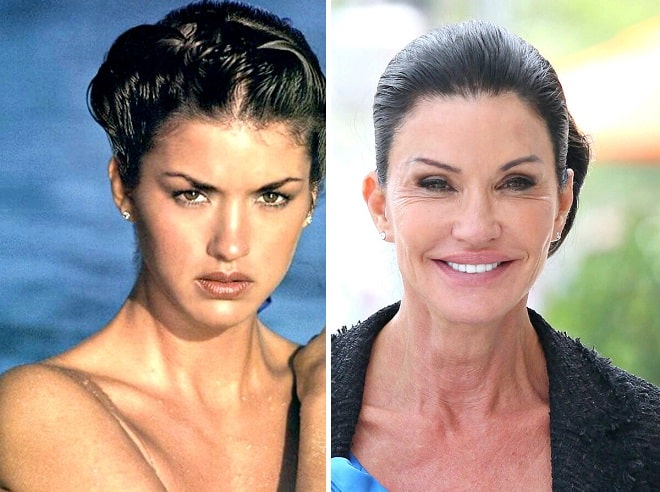 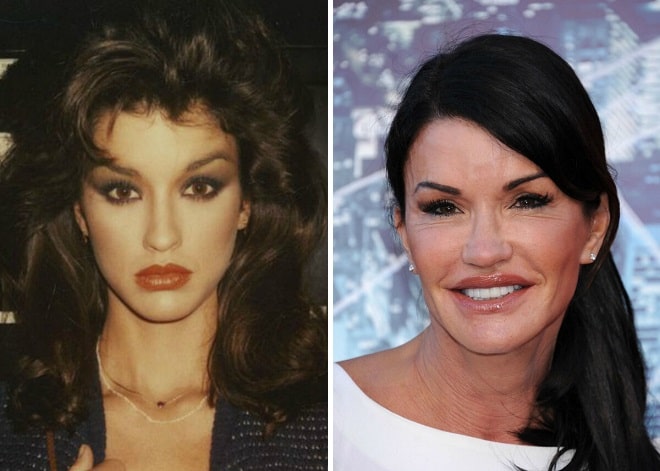 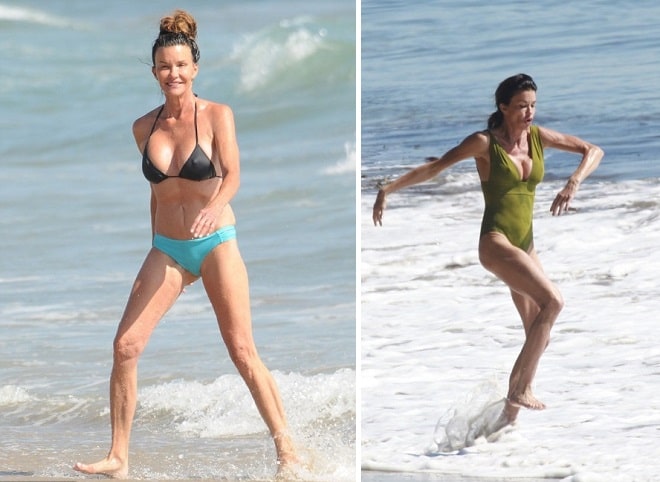 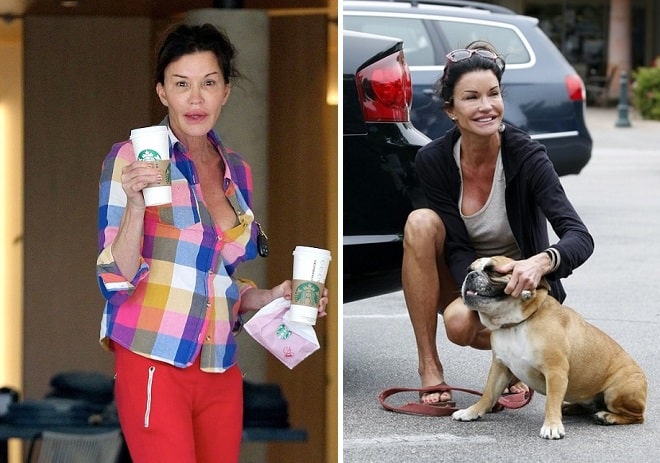