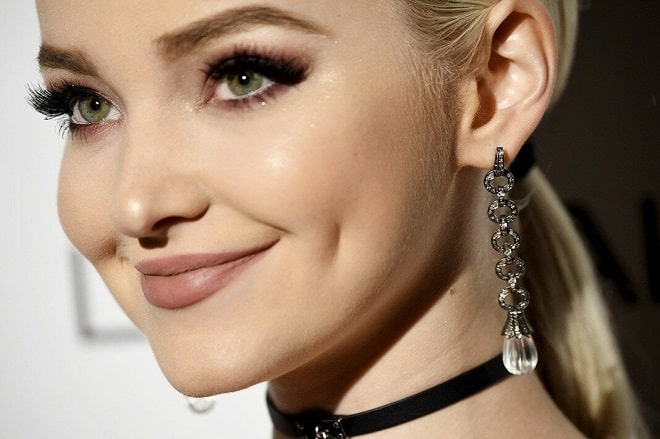 Dove was born on January 15, 1996, in Seattle, USA, under the name Chloe Olivia Celeste Hosterman. Later, having lost her beloved father at the age of 15, in memory of him, the girl took the creative pseudonym Dove, because that’s what the father called his little daughter.

The actress speaks fluent French, has French, Russian, Hungarian, Slovak roots in her ancestry. Perhaps it was the mixing of cultures that endowed the girl with talents, abilities, and incredible charm.

Dove has an older sister, Claire Hosterman (born 1989), a singer and vocal teacher.

Art has attracted Dove since childhood. At the public theater at Bainbridge Performing Arts, Dove played her first role. Moving with her family to Los Angeles, California, at the age of 14, Cameron sang in the National Choir of Burbank High School.

Dove remembers her school years reluctantly. In an interview, Cameron said that, since the 5th grade, she was constantly bullied in school. Despite the difficulties in communicating with peers, she always tried to follow her dream – to become a successful person in the field of entertainment.

The girl completely focused on building a career as an actress and singer. And nothing could stop her on the way to her dream. 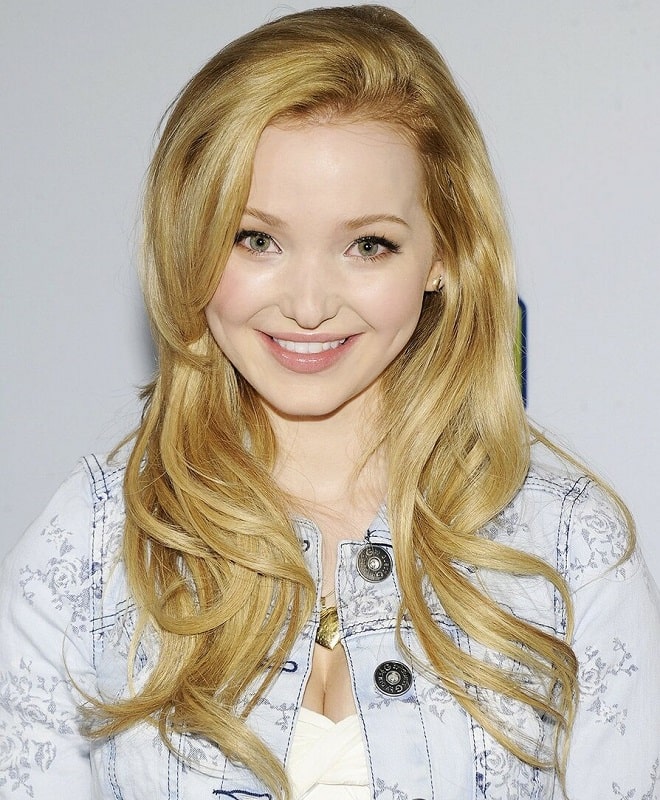 “I longed to become an actress and singer. I was consumed by this dream,” Cameron said.

Dove is not only a talented actress but also a singer. In 2013, Cameron released a cover of the song “On Top of the World” by the American pop-rock band “Imagine Dragons” as a single for the TV series “Liv and Maddie”, which lasted at the seventeenth place on the “Billboard Kid Digital Songs” chart for three weeks.

A little later, the young singer released the single “Better In Stereo” under the “Walt Disney Records” label, which became the first No. 1 hit for the aspiring singer. Her next single “Count Me In”, released in 2014, reached 1st place on the Billboard chart.

In 2015, Dove, along with Ryan McCartan, formed a band called “The Girl and the Dreamcatcher” and released several singles, for which video clips were also shot.

In 2017, Cameron confirmed that she had started working on her debut album.

Dove Cameron has never spoken publicly about plastic surgery. But her photos before and after eloquently say that she had a nose job. After rhinoplasty, the hump on the bridge of her nose disappeared and, in general, her nose began to look neater. 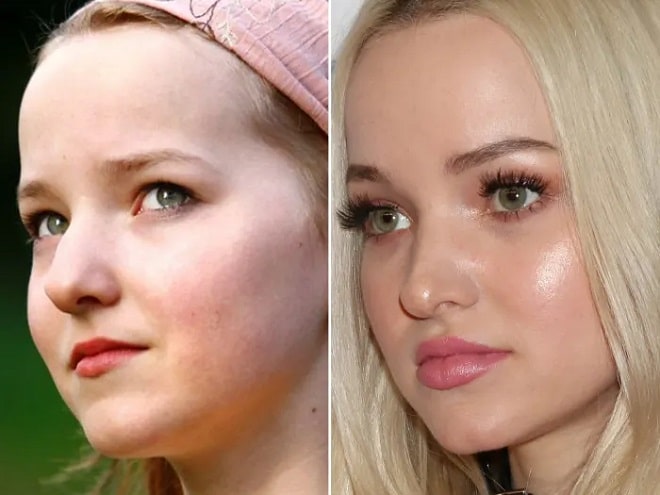 It is obvious that Cameron has done lip augmentation with the help of injections of fillers. In general, Cameron’s face looks sculptural, this indicates the use of contouring with fillers in the lower third of the face, in the area of cheekbones, lips, chin.

Dove’s eyebrows look more elevated than before and the upper eyelid looks a little bigger. Cameron may have had an eyebrow lift or botox injection.

They say that the actress is simply obsessed with artificial eyelashes and there is a lot of photoshop on her Instagram profile photos. She enlarges her eyes, lips, makes the waist thinner and reduces her nose with the help of photo editors.

Rumor has it that Dove Cameron had breast augmentation surgery with implants. 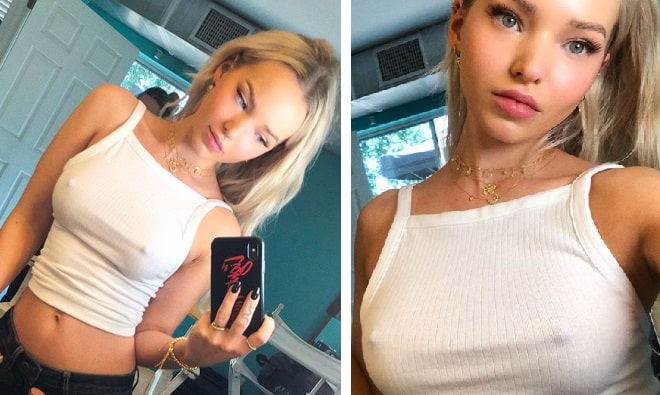 Dove shows off her breasts without a bra. The photos show the actress’s tits, which shine through the white top.

The Evolution of Beauty Dove Cameron 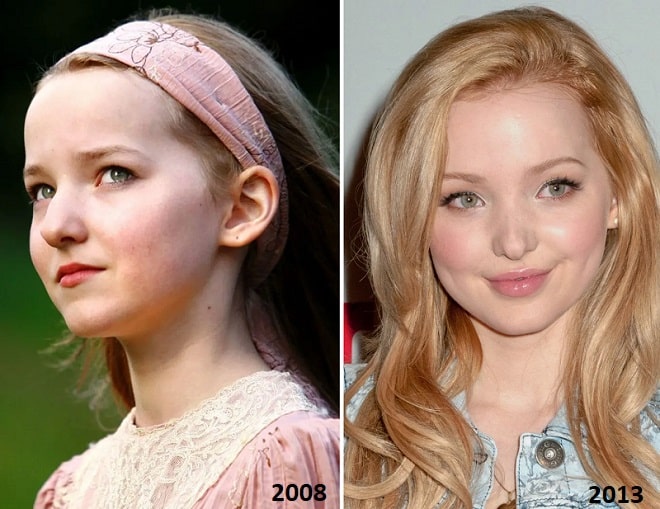 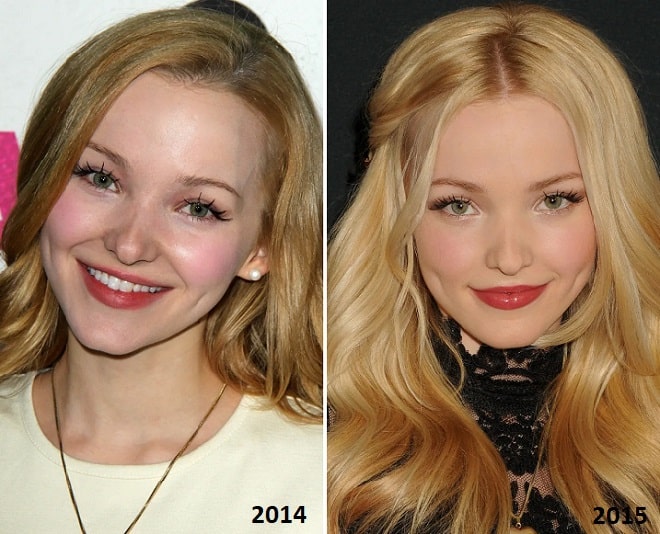 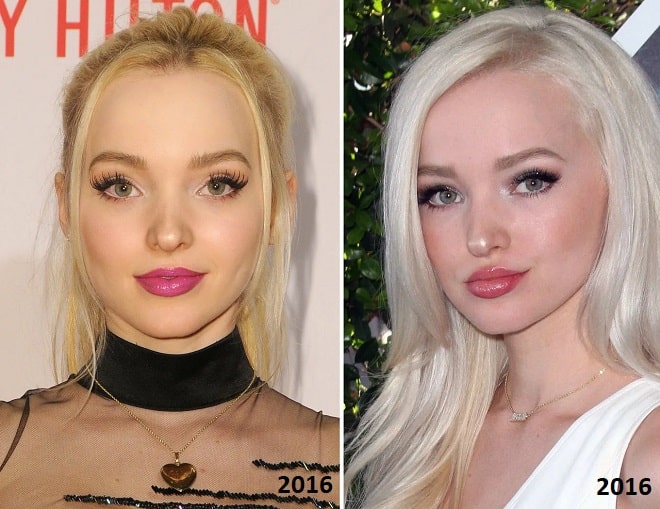 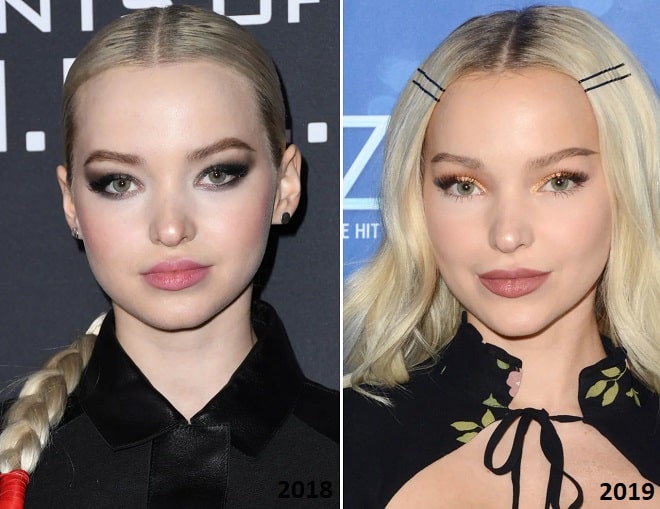 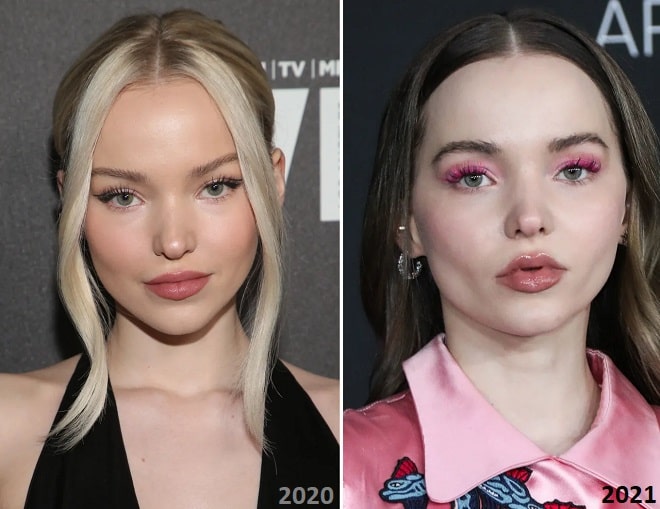