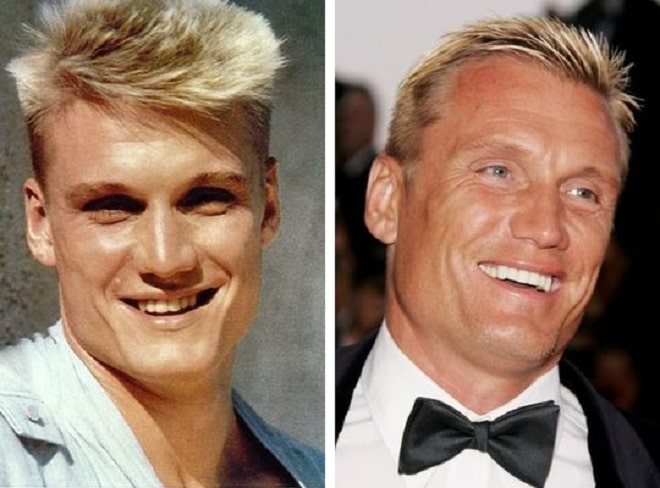 Dolph Lundgren – one of the main action stars of the 90s – got a Hollywood smile after the peak of his fame.

Like his colleagues, Dolph Lundgren came to cinema from martial arts – in his homeland in Sweden he was a very famous karate player. After moving to the USA, he changed many professions and even worked as a bouncer in a bar. In the end, the textured Scandinavian was noticed by the bosses of the film industry, but at the initial stage of his career he was forced to play mostly insensitive jocks. Perhaps it was also the fact that Dolph did not have a lively expression on his face, and his smile was not so attractive as to emphasize this.

Dolph Lundgren’s worldwide fame was brought by the role of the Soviet boxer Ivan Drago, who never smiled during the entire film. In the future, Dolph never managed to get rid of the role of the action hero – he starred in almost 50 films of a similar subject.

Anyway, Lundgren went to the dentist and installed snow-white veneers. In life, he is a very positive and versatile person, and with new beautiful teeth, the actor began to smile much more willingly.