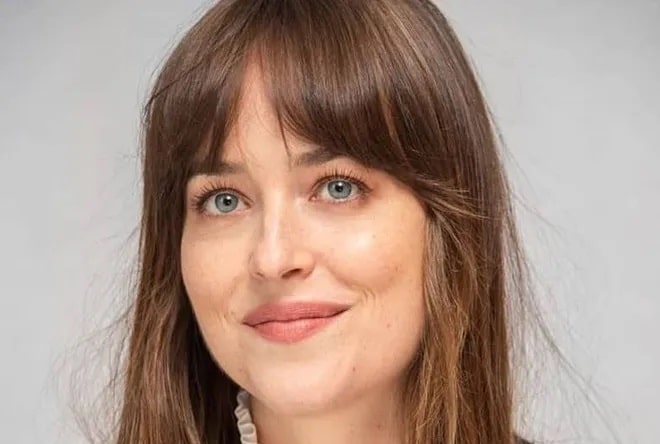 Dakota Johnson is an American model, Hollywood actress. The most famous role she played, was in the film “Fifty Shades of Grey”, filmed in 2015. For her, she was awarded the “People’s Choice Awards”. Was nominated for a BAFTA Award.

Did Dakota Johnson have plastic surgery on her face and body? How did she look in her youth and how has her appearance changed now?

Dakota Johnson was born into a stellar family: her parents are actors Don Johnson and Melanie Griffith, her grandmother is an artist Tippi Hendren. Despite the fact that Dakota’s parents separated when the girl was seven years old, she grew up in a close-knit family: her stepfather was Antonio Banderas, who took care of his stepdaughter. 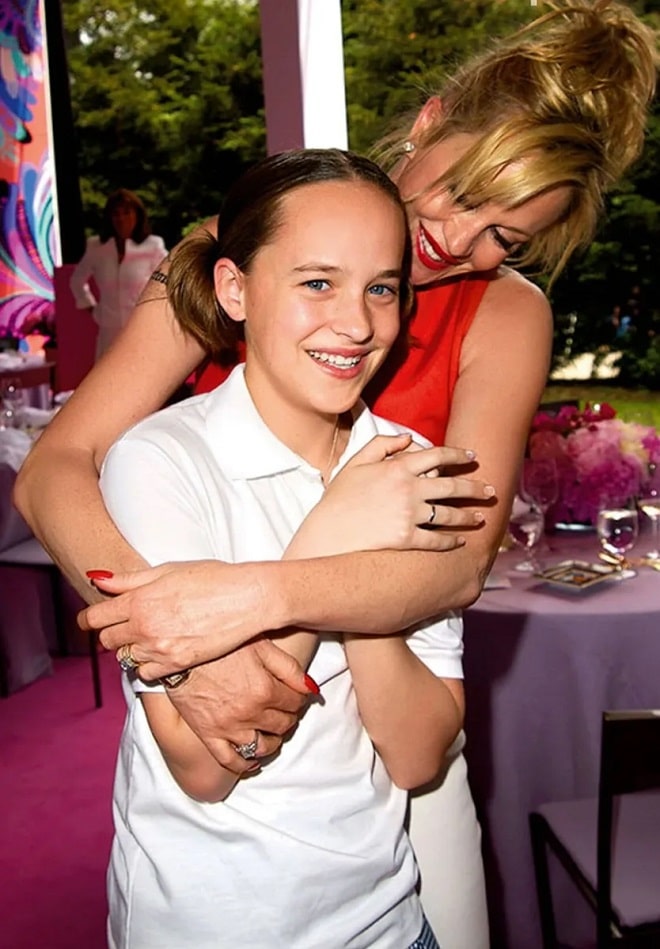 At school, the future star was fond of dancing, and after shooting for Teen Vogue magazine (it was a special photoshoot of celebrity children), she became seriously interested in modeling. In 2006, she signed a contract with the agency IMG Models. However, for Dakota, this cooperation was not so successful.

The actress Dakota Johnson had little experience of filming in a movie: at the age of 10, she starred in the film “Crazy in Alabama” together with her mother and stepsister Stella, and the film was directed by Antonio Banderas himself. In order to continue to get roles in films, Dakota turned to the William Morris Agency. Already the first film with the participation of 21-year-old Dakota “The Social Network” received critical acclaim and was nominated for an Oscar. 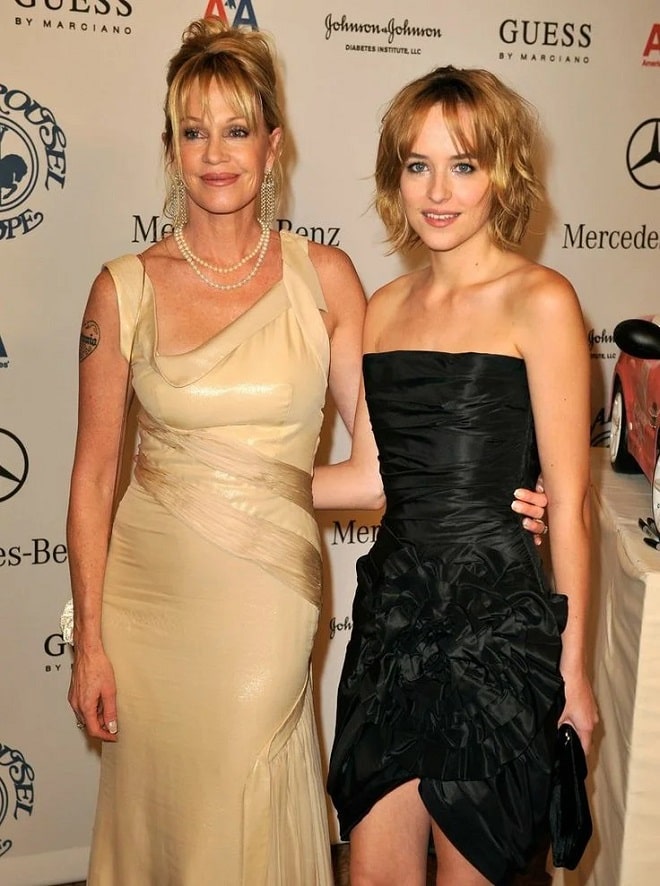 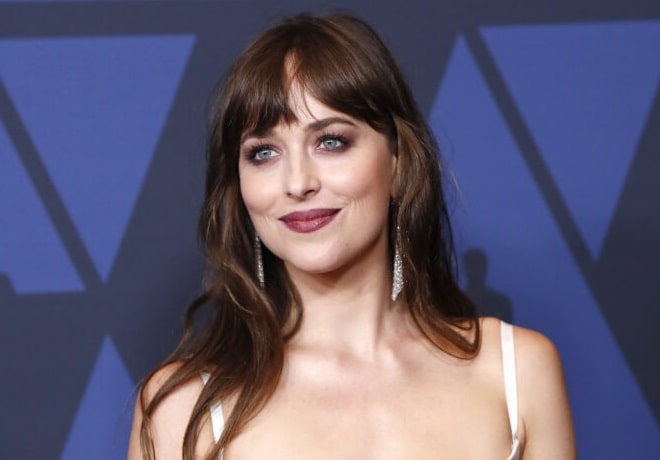 After the premiere of “Fifty Shades of Grey”, actress Dakota Johnson signed a contract to participate in two more parts of the film. And if for the first film the actress received a fee of $ 250 thousand, then for the next series the actress earned $ 7 million.

In the early photos, Dakota is still a pretty blonde with playful uneven bangs. That’s just her charming smile with a noticeable gap between the front upper teeth prevents her from being called Hollywood smile. And the use of bright red lipstick in the style of Marilyn Monroe for lip makeup only attracts additional attention to this disadvantage. 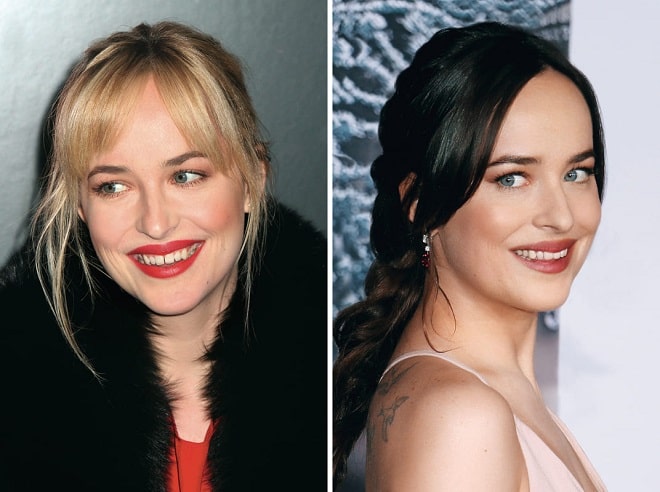 In 2019, 29-year-old Dakota Johnson attended the premiere of her new film “The Peanut Butter Falcon”. Fans paid attention to the changes in the appearance of the idol. 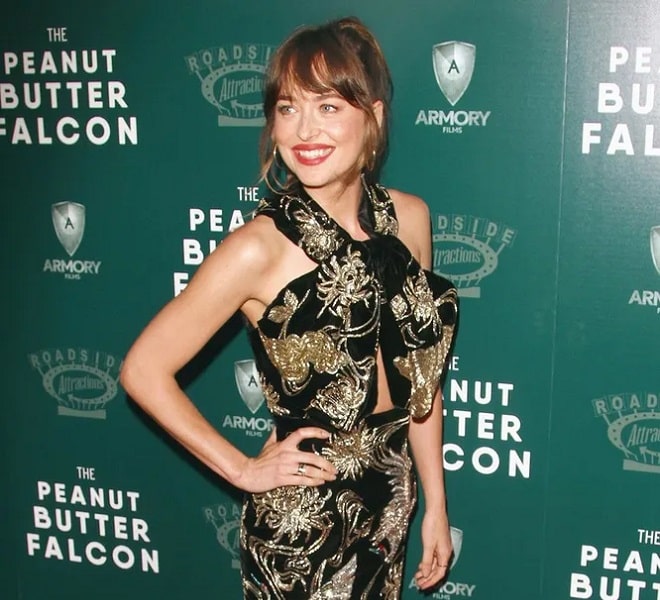 The star of the film “Fifty Shades of Grey” arrived at the premiere of the tape in Los Angeles. The actress wore a tight black mini dress with gold patterns. Two large bows were visible on the chest of the outfit.

Johnson made a high hairstyle but left a few curls loose. The actress emphasized her lush lips by putting on red lipstick. The star daughter of Melanie Griffith refused expensive jewelry, leaving only ring earrings.

Fans were pleased with the long-awaited appearance of the actress on the red carpet. But exactly until the moment when the stepdaughter of Antonio Banderas smiled at the photographers. It turned out that Dakota got rid of her main “feature” – a small gap between her front teeth. 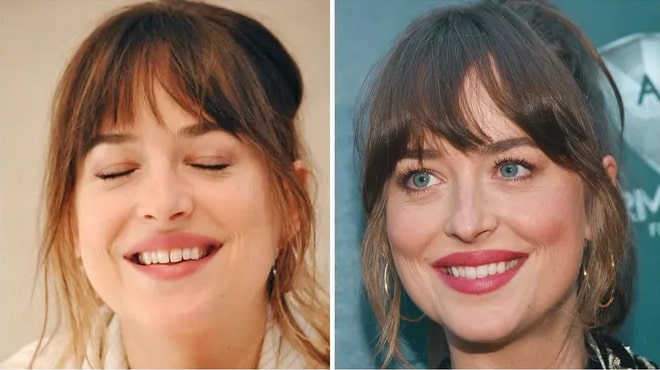 Fans expressed their dissatisfaction with the posts on Twitter. But some viewers felt that the star had the right to decide on her own what changes in appearance she should agree to. “Yes, it was part of her brand and, what to hide– the gap between the teeth gave her charm. But if it’s more comfortable for her, then it’s up to her to decide. The main thing is that Dakota likes it,” they challenged the opinion of the “dissenters.” 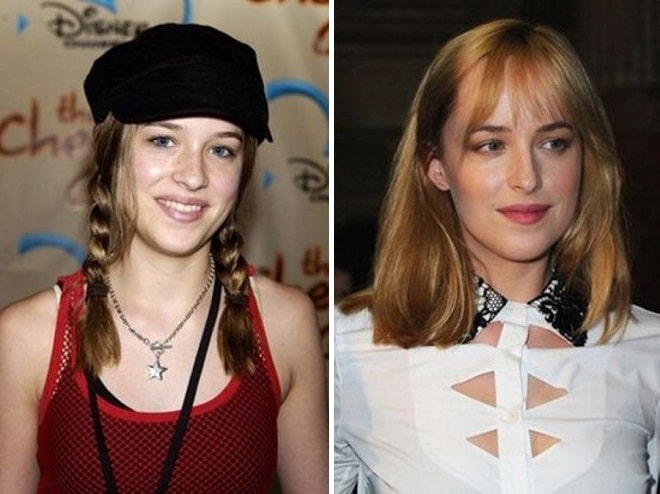 If you compare the photos, it becomes obvious that Dakota Johnson had a nose job. Before the rhinoplasty, her nose was wider, and after the nose became thinner. In addition, there are rumors that Dakota Johnson has done breast augmentation, lip filler injections, eyebrow lift, and eyelid surgery. But there is no convincing evidence of these plastic surgeries. Perhaps the actress had Botox injections in the forehead and around the eyes, so the eyebrows were slightly raised.