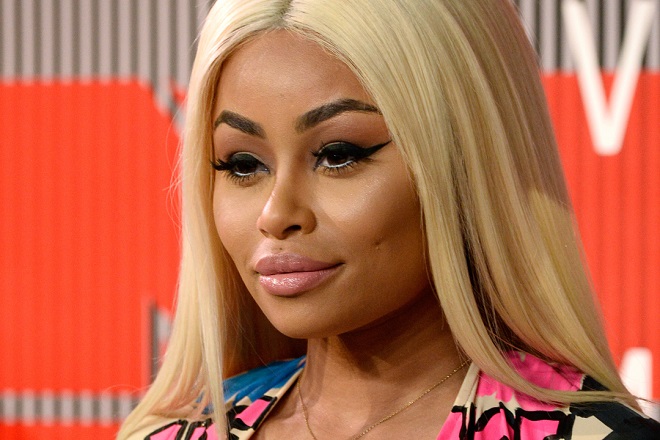 Blac Chyna is a bright, extravagant girl, known primarily for her romantic relationship with her brother Kim Kardashian – Rob. The owner of the buttocks impressive sizes often deserves comparisons with the most Kim and has many admirers around the world. Confirmation of these words is the fact that today her account on “Instagram” has almost ten million subscribers. Such incredible figures can boast not every beauty girl of Hollywood. Let’s get a look at the photos before and after to understand whether there was plastic surgery. 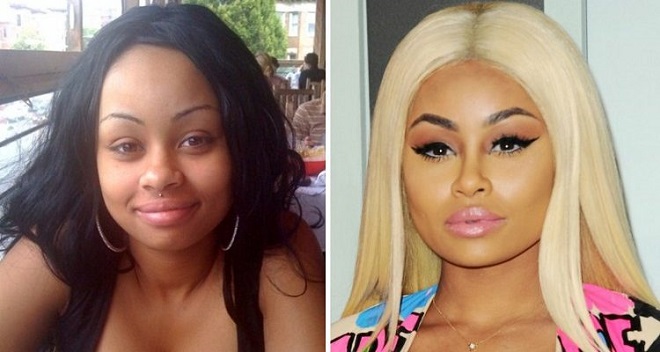 Blac Chyna was born May 11, 1988, in Washington state. It is known that at birth she was named Angela White. Unfortunately, the girl’s parents are not the stars of business, politicians or public people, so the details of their lives are unknown. 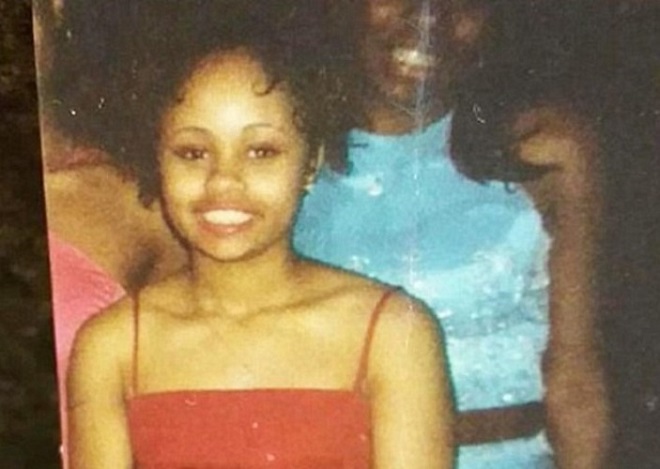 At the age of 16, Angela began to earn money by dancing on the pole in Nightclubs in California. In those years she took the stage name Blac Chyna. According to rumors, already at a fairly young age, she gained great popularity as a successful and talented stripper. In many ways, she helped the bright and extraordinary appearance. 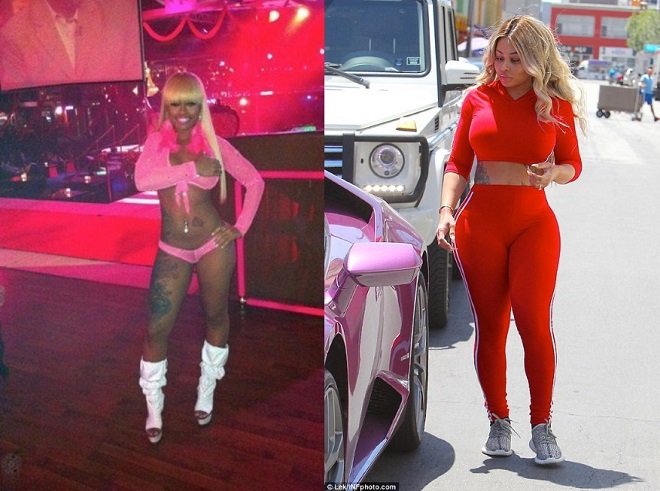 The girl had a curvy shape, especially in the buttocks, many were interested in how she kept on the pylon. But men highly appreciated Blac Chyna for the figure, and the girl starred in several videos of popular hip-hop artists. 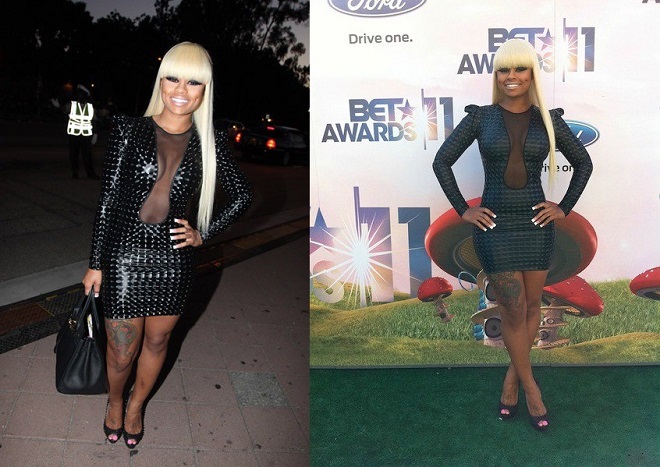 Rumor has it, that the Blac Chyna owes her success to plastic surgery to increase the volume of the buttocks. But to confirm or refute these statements is difficult since there is practically no photo before plastic surgery. 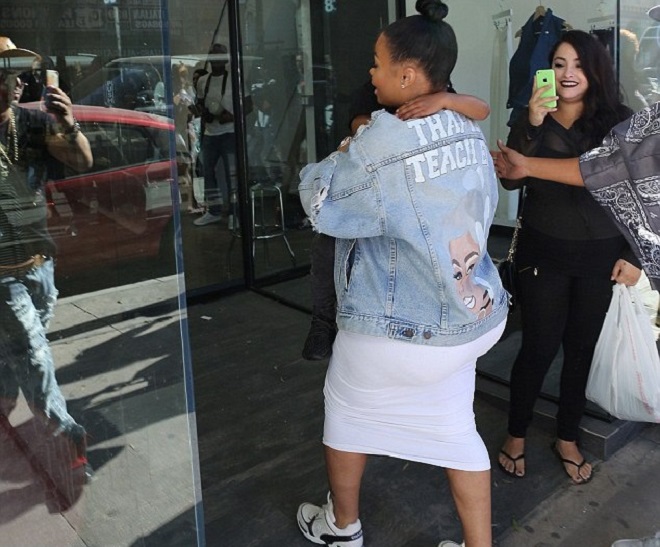 The beginning of stellar life

The real fame she received in 2011, when she entered into a civil marriage with a popular rapper Tyga and gave birth to a son named King. With musician, Blac Chyna lived together for several years, but in 2014 the couple broke up. According to rumors on the Internet, the civilian husband Blac Chyna left her for another beautiful Los Angeles-pretty Kylie Jenner. 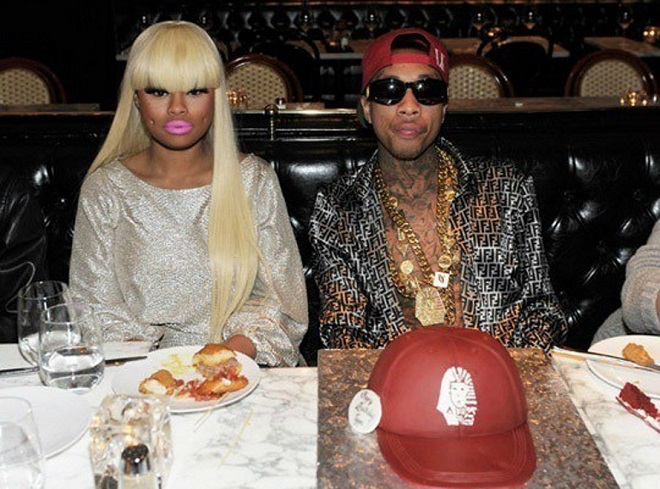 In the US today it is hard to find a person who would not have heard anything about the scandalous and brilliant Kardashian family. This is facilitated by the fame that Kim Kardashian and her relatives received on numerous television talk shows, scandals, and extravagant antics. 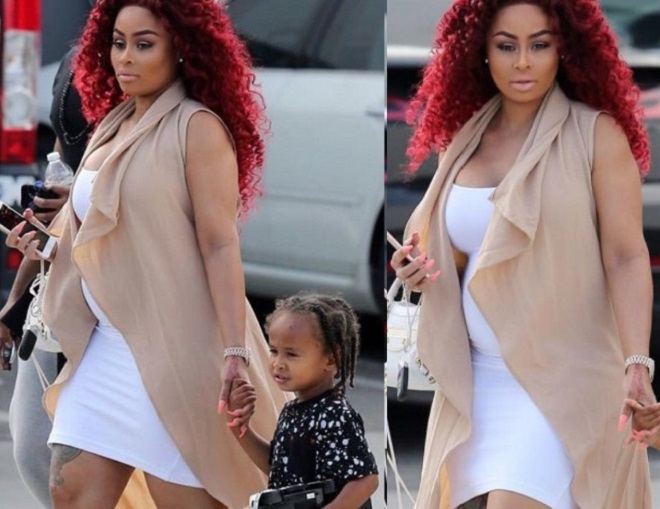 Recently, Blac Chyna has closely connected with the family Kardashian, and therefore doomed to worldwide fame. 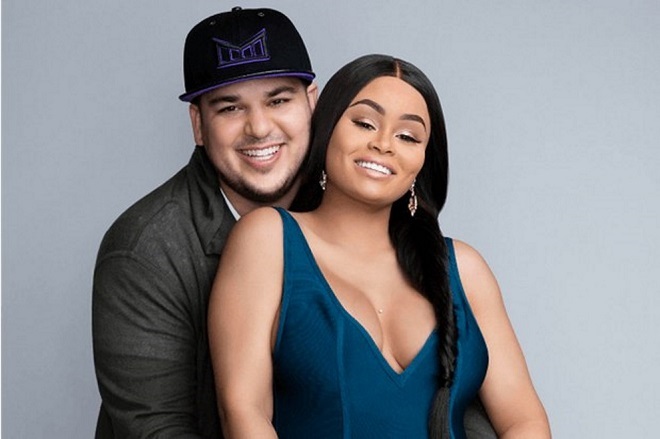 In January 2016, it became known that she was Dating Rob Kardashian, brother Kim and Kylie Jenner (the same girl, to which is gone rapper Tyga). 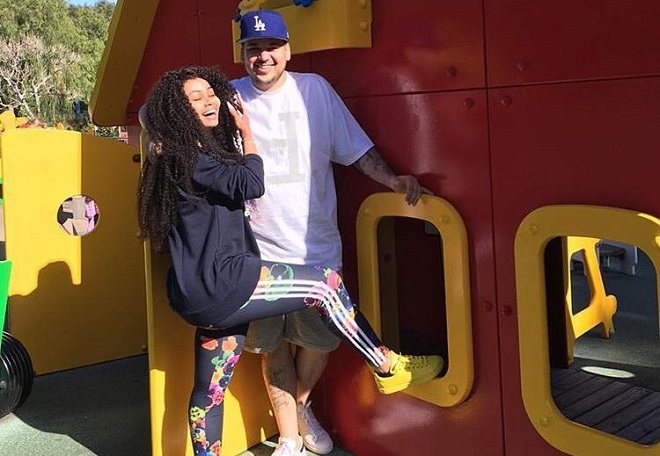 Only three months later, Rob and Blac Chyna were married. And their daughter Dream was born on November 10, 2016. 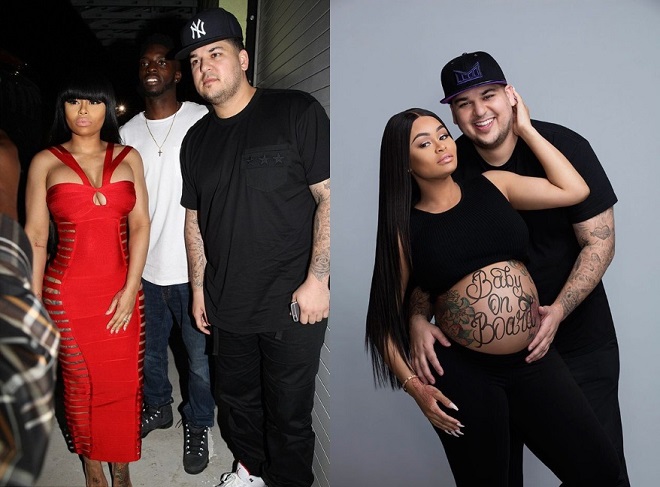 Blac Chyna with Kim became good friends. The paparazzi several times caught them in joint classes in the gym. And the ladies themselves are not averse to posting photos of their famous forms. 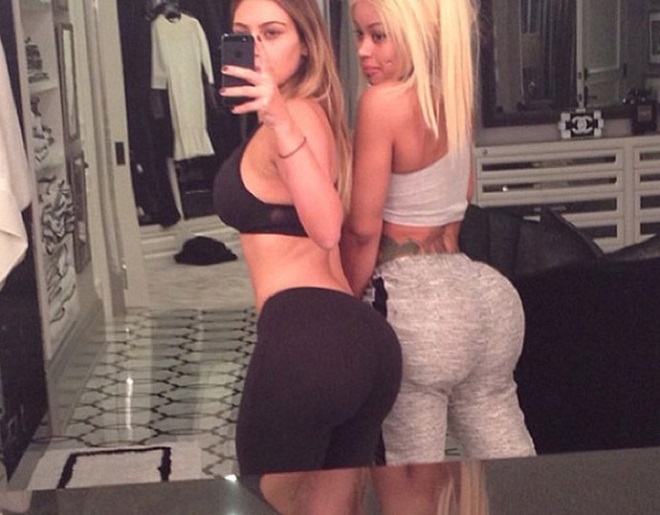 Blac Chyna is brightly painted and wears provocative outfits, similar in style to the costumes of Nicki Minaj. 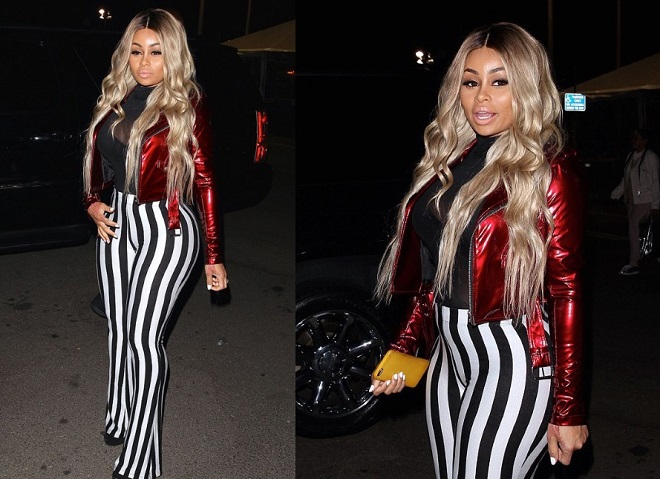 The similarity with Nicki Minaj give unnaturally round buttocks, which Blac Chyna demonstrates at every opportunity. 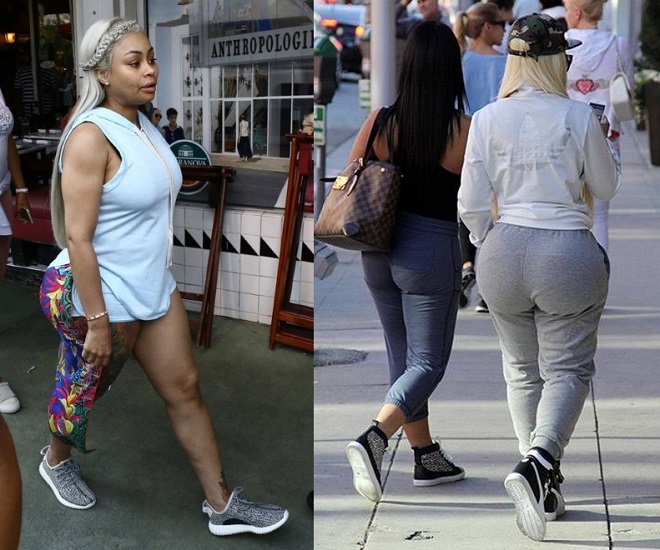 She argues that such outstanding forms gave nature, but fans of the Kardashian family doubt the veracity of such words. Internet users suggest that the main highlight of Blac Chyna is a miracle of modern plastic surgery. 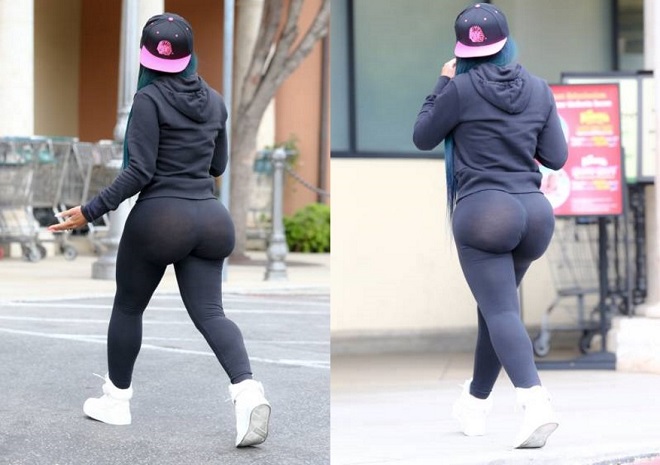 In proof of his words, they produce photos of Blac Chyna before period working as a dancer, which thigh is not so impressive. Experts note that the unnatural curves of the buttocks and the big difference with the waist can really testify to plastic surgery. 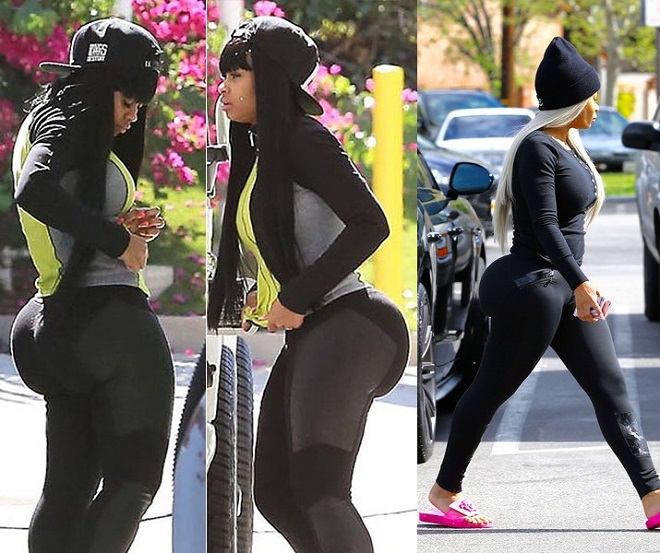 But girl stubbornly silent and insisting on naturalness, even when the Network rumors about the turned implants and visits to the plastic surgeon. 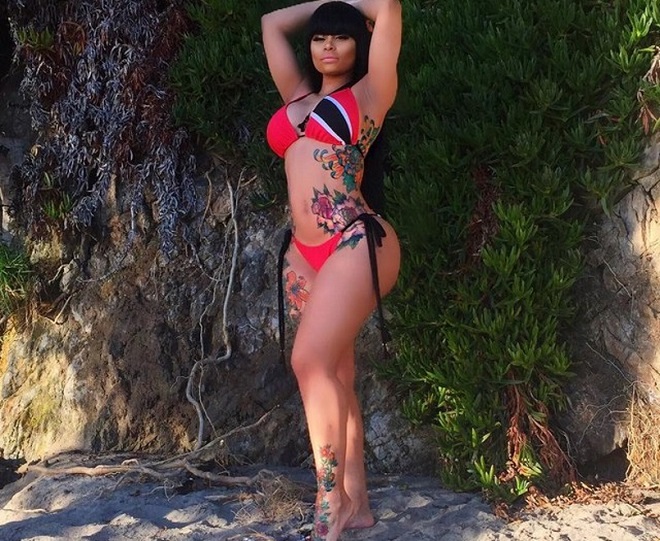 In any case, whether there was interference or not, the figure’s merits brought girl fame.

The material is based on the comparative analysis of photos and does not contain the statement of the fact of plastic operations.